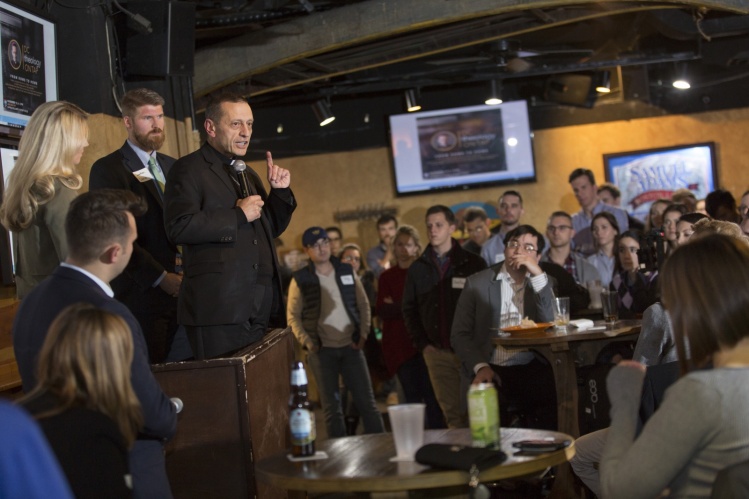 Bishop Frank J. Caggiano of Bridgeport, CT, speaks at a Theology on Tap with Jonathan Lewis, an auditor at the Synod on Young People in Washington, DC (CNS photo/Jaclyn Lippelmann, Catholic Standard)

Part of a series on the Synod on Young People, the Faith, and Vocational Discernment at the Vatican, this is the last of Griffin Oleynick’s dispatches from Rome. Catch up on his first, second, third, fourth, and fifth pieces here.

On my last night in Rome covering the Synod on Young People, I got lost in a neighborhood adjacent to Vatican City. To return to my hotel, I had to circumambulate the mura vaticane—the massive walls first erected by Pope Leo IV in the ninth century and later reinforced by Pius IV in the sixteenth. I was struck not only by their height and thickness, but also by the kind of church they represent: fearful, defensive, and opaque. Farther along, though, it’s a different story, as the walls end abruptly at St. Peter’s Square. Here, Michelangelo’s twin elliptical colonnades gracefully cradle the open space like two outstretched arms. The architecture now signals a different kind of church, one that embraces visitors and pilgrims from all around the world. How appropriate, I thought. Just before leaving the Synod, I’d stumbled on the Vatican as a kind of visual metaphor for the Roman Catholic Church: an institution at times open and loving, but just as frequently impenetrable and unwelcoming.

The Synod officially concluded almost three weeks ago, with Pope Francis, delegates, and auditors all expressing mutual affection and gratitude for their time together. A cheerful atmosphere prevailed at the closing Mass held in St. Peter’s Basilica on October 28, where during his homily Francis thanked participants for their “witness” to unity and synodality. “We have worked in communion, with frankness and the desire to serve God’s people,” the pope said. Since then, delegates have explained that the Synod really isn’t over: the challenge now is bringing its collaborative spirit to dioceses and parishes all over the world. The road ahead won’t be easy. After returning to the United States in mid-October, I noticed a pointed lack of interest in (and even a certain skepticism toward) the proceedings—even from friends in the priesthood and religious life. How can the Synod overcome such indifference and realize its promise to revitalize the church for coming generations?

Whatever the Synod accomplishes in the next few months, its “first fruit”—the much anticipated Final Document—has failed to generate much enthusiasm. At more than twenty-seven thousand words, it’s both shorter and more concrete than the earlier Instrumentum laboris, but that hasn’t made it more widely read. Drafted in Italian by a small committee of delegates and approved on October 27 by a two-thirds vote in the hall, the Final Document still hasn’t been made available in English. Analysis on this side of the Atlantic has largely focused on the document’s third and final section (it’s dedicated to pressing problems and practical proposals, while the first two are theoretical). Critical reactions have emerged from different sides: progressive commentators have decried the exclusion of the term “LGBT,” calling it a “missed opportunity,” while conservatives have objected to passages on the topic of synodality. Some speculate that Pope Francis may rework the findings into an apostolic exhortation, but it’s difficult to see how another text will change the conversation. One priest friend, reflecting on best practices in homiletics, quipped, “If you’ve written more than a page, you’ve lost your audience.”

Bishops too are capable of listening and learning, especially when they open themselves up to young people—that is, to those with the least amount of power (but some of the best ideas) in the church.
sharetweet

But the poor reception of the Synod thus far isn’t solely the fault of the Vatican. There’s also the way the story has been told in the media. The contentious 2015 Synod on the Family, with its intense focus on admitting divorced and remarried couples to communion, primed us to think of synods in the reductive terms of the culture wars, “synodality” understood not so much as a collaborative discussion open to the generous outpouring of the Holy Spirit, but instead as a political contest that produces clear winners and losers. Even before the Synod on Young People began, it had become a kind of proxy for a host of divisive issues—the abuse crisis first among them, but also church teaching on homosexuality, the role of women in church leadership, and the shape of the liturgy. This conditioned the kinds of questions reporters asked at daily press briefings, their inquiries often revealing a disconnect between Synod discussions and developing news in the church outside Rome. (It was instructive to linger afterwards in the briefing room, where writers from different publications tended to gather in like-minded circles.) When major conflicts failed to materialize, and as Pope Francis and the delegates declined to pronounce definitively on any of these topics, media attention simply moved on.

That’s a shame, because something vital, important, and meaningful did happen at the Synod. And not just for those in Rome, but for the church beyond. “The participation of young people,” the Final Document points out, “helped ‘reawaken’ synodality, which is a constitutive dimension of the Church. As St. John Chrysostom says, Church and Synod are synonyms.” Indeed during my time at the Synod, I saw a living image of what the church can be when it really functions as ecclesia—that is, a diverse, global community of believers, called together and united in prayer, walking under the guidance of the Holy Spirit.

And this wasn’t just my impression. Last week, I followed up with a few of the delegates and young auditors I’d met in Rome. Jonathan Lewis, Assistant Secretary for Pastoral Ministry and Social Concerns for the Archdiocese of Washington (and one of three auditors from the U.S. delegation) remains enthusiastic: “In talking with my fellow auditors across the world, we’re on fire with the Holy Spirit and energized to bring this experience of the church engaging young people back to our dioceses.” But he takes a sober view of the challenges ahead. “Bishops, clergy, and laity in our parishes did not have that same experience we did,” he said. Recreating the “beautiful experience of synodality” in local dioceses will require an authentic paradigm shift, one in which young people increasingly take on leadership roles just as elders learn to offer more effective mentorship. In other words, if the church wants a “renewal of mission,” then it needs to begin with a “conversion of heart.”

At least among members of the hierarchy present at the Synod, that’s exactly what took place, as one of the delegates I’d spent time with in Rome, Fr. Michael Czerny, SJ (of the Vatican’s Section for Migrants and Refugees) confirmed. While the Synod did reach important pastoral conclusions—the Final Document calls for increased solidarity with young migrants, but also critiques the capitalistic aspects of social media and urges the church to rethink the structures of parish life, priestly formation, and the role of women—in Czerny’s view what the Synod really accomplished was a decisive change in the hierarchy’s mentality:

At first ‘we’ Synod Fathers regarded ‘them’—the thirty young auditors, or ten percent of all participants—as at best a puzzle, at worst a lost cause or even a threat. But over four weeks a major learning and tectonic shift took place: young people went from ‘problem and target’ to an integral and appreciated part of “we the Church.”

There’s an old lesson worth repeating: diversity needn’t divide. This “we the church” is inclusive of all generations and particularities. Young people are integral to the church’s apostolic work, as missionary disciples.

The novelty that emerged at the Synod, then, is a more authentically relational church, a “mosaic of faces” (as the Final Document puts it) that not only takes seriously but indeed revels in the diversity of its members. That’s what the delegates mean by synodality, Czerny told me: a synodal church is “both journey and goal, method and achievement.” It’s an indication not only of where Pope Francis wants to lead the entire church, but also of how he intends to arrive there. Church reform, in this sense, isn’t so much a matter of fixing what’s wrong (as important as that is), but rather building on what’s right, healthy, and good.

Still, recent days have reminded me of how far we still need to go. And I don’t just mean the ongoing sex abuse crisis, or the divided state of the church in America today. The hopeful glow I found in Rome seems to have worn off, as I find myself once again in a church in which my LGBT friends are mostly unwelcome, the poor are often kept at arm’s length, and young couples preparing for marriage encounter pastors who seem more interested in obstruction than accompaniment. I feel a bit like the two disciples must have felt after Jesus’s crucifixion, as they made their way along the road to Emmaus: lost, demoralized, and unsure how to proceed.

Why can’t the U.S. church be better than this? Why, just to keep believing and belonging, must I go on repeating tired defenses, like “the church thinks in centuries, its views will evolve” and “the church is more than the bishops”? Because the Roman Catholic Church is also the bishops, its leaders—and right now, as demonstrated at their annual meeting in Baltimore, they’re not leading.

And yet, as the Synod on Young People showed me, bishops too are capable of listening and learning, especially when they open themselves up to young people—that is, to those with the least amount of power (but some of the best ideas) in the church. What if, instead of more defensiveness, more promises to “study the questions” and more lengthy reports, the bishops actually began to listen in concrete ways? Why can’t the Archdiocese of New York convene a synod? And why not Washington, and Philadelphia, and Boston? Why not every diocese in the country? The Lord, as the Synod on Young People resolutely insists, is calling us all together, urging us to practice synodality everywhere, not just in our local dioceses but in our parishes and homes. The resurrected Christ, as with the two disciples on the road to Emmaus, wishes to draw near and reveal Himself, to inflame our hearts and empower us for mission. How long will we keep walking, failing to recognize His presence at our side?