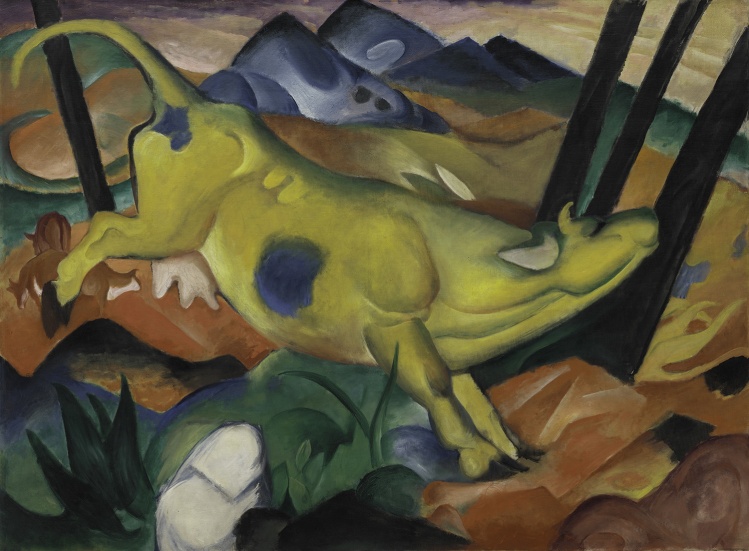 It was a friendship forged in a crucible of creativity. One of the men had begun to see modern life in kaleidoscopic new forms and colors, painting animals, and especially horses, with the elemental energy and elegance of the Lascaux Cave paintings. The slightly younger one seemed to see everything around him in brilliant, form-dissolving color. Soon after meeting each other, the older one wrote to the younger: “I consider it a great stroke of luck to have at last met a colleague of so inward and artistic a disposition—rarissime! How pleased I would be if we were to succeed in exhibiting our pictures side by side!”

That meeting occurred on January 6, 1910, after August Macke happened on some prints by Franz Marc in a Munich gallery and went to the older man’s studio that very afternoon. Soon, an intense correspondence began; then, family visits and professional and social trips together. And now the pictures of Marc and Macke are indeed hanging side by side, at New York’s Neue Galerie, in an exhibit featuring some seventy paintings and works on paper loaned by public and private collections worldwide. (The show, which closes on January 21, is accompanied by a richly illustrated catalog.)

The sense of foreboding increases as you progress through the Neue’s four modest galleries.
sharetweet

The first gallery introduces us to the two artists with work from the year before they met: Marc’s Siberian Sheepdogs (1909), a double “portrait” of the artist’s beloved dog Russi, and Macke’s charming Portrait with Apples (also 1909), a meditative, deeply affectionate portrayal of his pregnant wife Elisabeth. In the same gallery hangs the only oil portrait there is of Marc, which Macke completed in twenty minutes after the two new friends challenged each other to see who could paint the other fastest. (Marc’s portrait of Macke—“awful” according to Marc’s wife—has been lost.)

A brief comparison of the artists’ biographies hints at their eventual affinities. Marc was born in Munich in 1880 to Sophie and Wilhelm Marc, a landscape painter. He studied at the Munich Academy of Art but was dissatisfied with its commitment to naturalist realism. In 1903 he traveled to Paris and studied the Impressionists and Post-Impressionists, and on a return trip in 1907 was particularly inspired by van Gogh and the artists known as the Fauves, led by Henri Matisse and André Derain, who valued vivid color and expressive line over ordinary representation. Fascinated from a young age by animals of all sorts, Marc began to study their anatomy, in Munich and at the Berlin Zoo, and imagined them through the symbolic color palette of the Fauves.

Macke was born in 1887 in Meschede, Westphalia, the only son of Maria and August Macke, a building contractor and amateur artist. The family soon moved to Cologne and then, in 1900, to Bonn, where in 1909 Macke married Elisabeth Gerhardt. By then he had already studied at the Kunstakademie Düsseldorf and had traveled widely. In 1907 he also visited Paris, where, like Marc, he took note of the Impressionists and Post-Impressionists, and then Berlin, where he spent several months in Lovis Corinth’s studio.

The great common adventure of the two men’s lives came in the summer of 1911, when Marc and Wassily Kandinksy, in association with Macke and Gabriele Münter, founded Der Blaue Reiter (Blue Rider) group; that December, in opposition to the New Artists’ Society of Munich, they organized the “First Exhibition of the Editorial Board of the Blue Rider.” (The following spring saw the publication of the only volume of The Blue Rider Almanac.) This loose but ardent grouping of artists formed the Munich pole of what came to be known as German Expressionism (the other pole being Dresden, where Die Brücke—“The Bridge”—had begun in 1905).

The Neue exhibit includes a painting by Marc that was part of the Blue Rider show: Ape Frieze (1911), in which a group of monkeys rushes headlong from the upper right to the lower left of the canvas against a background of rich vegetation and red, abstract pyramidal forms on the horizon. The Guggenheim’s famous Yellow Cow (1911) was also in the Blue Rider show; it was Marc’s tribute to his wife, Maria Franck, and their time in the town of Sindelsdorf, to which they had moved in the spring of 1910. The painting, its titular animal obscuring almost everything else on the canvas, including a small herd of red cows blending into a red field, also illustrates Marc’s fundamental theory of color: blue representing the masculine, yellow the feminine, and red the material (and often threatening). A work not included in Blue Rider (much to Macke’s vexation) is on display at the Neue: Woman Playing a Lute (1910), whose lush colors, pictorial depth, and sinuous forms, highlighted by a daring large white vase in the center of the canvas, remind one of Matisse’s Vence interiors of the 1940s. 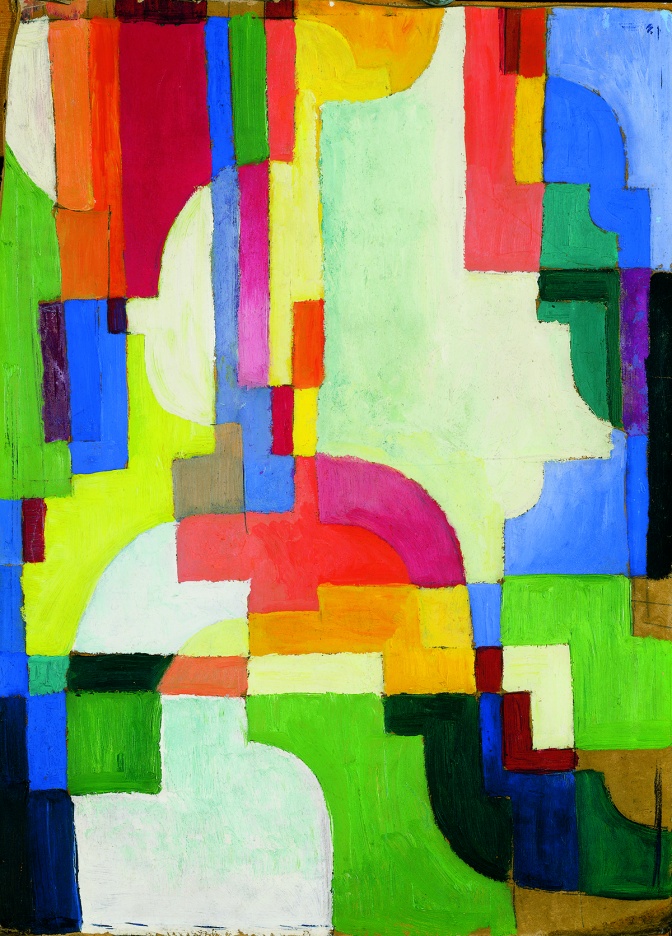 In the three years following Blue Rider, Marc and Macke showed together in Munich, Berlin, Dresden, Cologne, and Moscow. In 1912 they traveled to Paris to visit Robert Delaunay, whose chromatic Cubism (Apollinaire called it Orphism) impressed them both, Macke especially. From Marc and Macke’s work in the two years before World War I began, curator Vivian Endicott Barnett has made a stunning selection for the Neue show, hanging five major oil paintings on a vivid saffron wall—three by Macke and two by Marc that complement each other stunningly. Macke’s Forest Walk, Four Girls, and Lady in the Park radiate his charm, delicacy, and musical line (the viewer sways with the lady walking in the park). Marc’s Deer in the Forest II is a likewise engaging, primeval forest scene, while The Wolves (Balkan War) fairly screams violence. (In a small gallery nearby hangs Marc’s The First Animals, a work in gouache and pencil on paper that recalls his Edenic view of the animal world, in stark contrast to his more famous, apocalyptic Fate of the Animals [1913], which is not in the Neue show).

Throughout the final gallery the influence of Cubism and Italian Futurism is evident—prismatic, multifaceted structures dissolving into each other, forms suggested rather than defined, a sense of temporal suspense (or acceleration), a sense, if you will, of humanism on an unknown threshold. It is most on display in the late turn to abstraction represented by Marc’s Broken Forms (1914) and Macke’s exquisite Colored Forms I (1913) (whose German title, Farbige Composition, might better be translated “Colored Composition,” to emphasize its ecstatic unity). Each painting is part of a series, and alerts us to the artists’ increasing reliance on abstraction as war loomed in Europe and their earlier figurative work came to seem inadequate to the moment.

That sense of foreboding increases as you progress through the Neue’s four modest galleries. In September 1914, at the age of twenty-seven, young August Macke fell at the front in France; just eighteen months later, his friend Franz Marc, thirty-six, died there as well. We mourn their brilliant, foreshortened talents. But, in viewing their work hanging side by side, we can celebrate their shining early years.