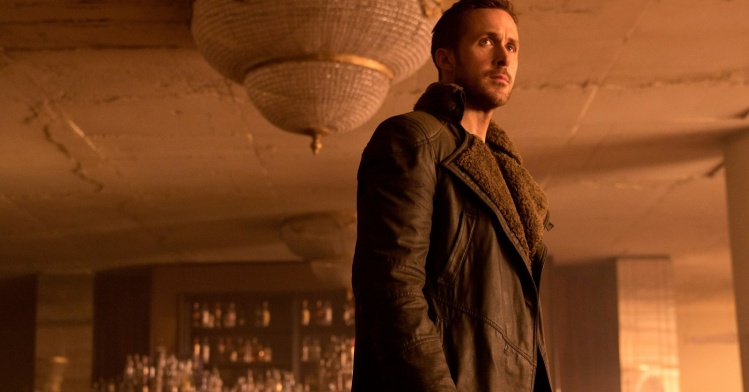 It’s been thirty-five years since Ridley Scott made Blade Runner, his tale of an android-killing bounty hunter set in what was then the distant future of 2019, in a grim Los Angeles where robots known as “replicants” have mutinied against their masters and are threatening mass subversion. Based on a story by Philip K. Dick, the movie seamlessly melded film noir and science fiction, its flying machines hovering over a perpetual city night lashed by rain, a glary world of neon on wet streets, and steam billowing everywhere. Scott’s vision became our default expectation for what the dystopian future would look like. His movie told a story of runaway technology, yet its settings were mostly broken-down, obsolete, and abandoned places. The gods of science gloried, while the rest of humanity lived as squatters and beggars, whores and thieves.

Blade Runner joined glitzy special effects—animatronics and fledgling computer-generated imagery—to a vision of deep darkness about human nature. The look channeled a German Expressionism consciously modeled on Fritz Lang’s Metropolis, and the visual world that resulted was uniquely absorbing. Every frame overflowed with background. “What’s going on here?,” mused critic Richard Corliss in his review, then answered his own question: “The here is what’s going on.” Philip K. Dick himself was thrilled by the look of the film, saying that he would have to see it “literally five times” before he could assimilate everything he was seeing. Here was a film whose protagonist was its environment.

Into its dark dystopianism Scott dropped paradoxical notes of humanity. In the role of replicant villain Roy Batty, Rutger Hauer was reminiscent of Klaus Kinski, and his slight Germanic accent helped boost something not only Nietzschean but Wagnerian about the closing of the movie. Blade Runner ended with the wild apparition of Hauer, stripped down to near nakedness and howling like a wolf, murderously chasing Harrison Ford among the gargoyles of rainy gothic rooftops. As dawn threatened to reveal the sun for the very first time, Hauer’s famed “tears of rain” soliloquy sounded an unexpectedly mournful, even operatic note of suffering. The moment reached for the sublime in the uncanny prospect of a robot tormented by loss, death, and the sudden impinging of feelings.

Blade Runner 2049, Denis Villeneuve’s highly anticipated sequel, takes this glowing wisp of a theme and tries to run with it. It never achieves full gallop, but rather leaps and briefly flies, only to bog down in narrative quagmires. At its best, the new Blade Runner works up a look of gloom-struck annihilation that may even exceed the first film for exhilarating visual despair. Whenever cinematographer Roger Deakins gives us the wide view from above, the result is breathtaking: panoramas of majestic depletion, a world denuded, its buildings shrouded in funereal mist and half-buried in ash, where even a dead tree deserves notice because it is, well, the only tree. The pounding, groaning Hans Zimmer score effectively reinforces the sense of shattering doom.

It’s when we focus on characters in a room that things go awry. Ryan Gosling is serviceable as K, the blade-runner counterpart to Ford’s Deckard from the first film (K is himself an android, while Deckard is presumably a human), and Ford himself puts in an enjoyably grizzled turn toward the end. But too often Villeneuve and screenwriters Hampton Fancher and Michael Green rely on tired tropes of villainy, and accents too; Jared Leto, as the current film’s version of the evil industrialist (played with masterly insinuation by Joe Turkel as Tyrell in the first film),  speaks his lines in awkward cadences straight from Villain Elocution School.

The plot, spun from pondering the replicants’ potential for acquiring essential human qualities, manages to be both flimsy and impenetrable at the same time—and gussying it up with gratuitous obscurities, such as a voice-recognition test that uses a scrambled quotation from Vladimir Nabokov’s novel, Pale Fire, doesn’t help. It’s worth remembering that when Blade Runner came out in 1982, initial reviews criticized the slow pace and paucity of the plot (The Los Angeles Times called it “Blade Crawler”).  Scott let his film ride on its own visual poetry, belaboring it only minimally with the mundane business of what happens next. Blade Runner 2049, in comparison, spends too much time elaborating, and emotionally milking, a hackneyed story that we don’t care all that much about.

Making a sequel to a highly influential movie poses some challenges. The first Blade Runner expressed the anxieties of a particular political moment in the United States, one that combined severe economic recession with a last burst of Cold War fear about nuclear annihilation; and the current movie, landing in a different cultural and political field, can’t have the same resonance. There’s also a newness problem. Watching the sequel, I kept thinking about other films, made since the first Blade Runner and inspired either directly or indirectly by it—from Terminator and Brazil to A.I., Eternal Sunshine of the Spotless Mind, Minority Report, Children of Men, and others. Even the Jason Bourne movies come to mind as a bewildered K digs into the secrets of his own background.

Success begets imitation, and in a you-can’t-go-home-again kind of way, Blade Runner 2049 highlights the problem of faithfulness in a remake. Fittingly for a science-fiction film, it’s a movie whose significance gets devoured by its progenitor’s own spawn.

If there’s a filmmaker who could be said to have flown under the radar during a career of fifty years and as many films, while amassing a Guggenheim, a MacArthur, and other awards, it would be Frederick Wiseman. Wiseman makes documentaries, and moreover espouses a particularly self-effacing approach to making them. Eschewing talking-head interviews and voice-over narrations, he lets his topics speak for themselves, patiently filming large chunks of whatever situation he has immersed himself in, then assembling them into a documentary that feels less like a study of some particular reality, and more like that reality itself.

His subjects are mostly institutions—schools and hospitals, prisons and police departments, state legislatures, a ballet company—and in Ex Libris he explores the New York Public Library. The three-hour voyage zips us out to satellite branches across the city, while regularly returning us to the mother ship and its majestic halls of marble, where devoted denizens address the business of acquiring and transmitting knowledge. This turns out to be a far more various enterprise than mere reading. Wryly funny scenes testify to the breadth of intellectual curiosity among the library’s patrons, and the resourcefulness of the staff in satisfying it, on subjects ranging from how to track ancestors who came through Ellis Island to where to find filed photographs of “dogs in action.” There are book-group discussions, readings for the blind, literacy sessions for kids, job fairs, piano recitals, poetry slams, a discussion of atheism with Richard Dawkins, and a lecture by a Jewish scholar discussing the history of delicatessens. Unblinking in his realism, Wiseman is brave enough to include staff and board meetings at which budget issues are discussed at numbing length.

Wiseman never identifies anyone, and while most viewers will recognize such celebrity visitors as Ta-Nehisi Coates, Elvis Costello, or Patti Smith, I found myself wondering, who was the scholar who spoke so eloquently about the Atlantic slave trade and its relation to Islam? Yet one appreciates the point that even celebrities take a back row to the library itself and its multifaceted mission of civilization.

The film has been billed as “a love song to the New York Public Library.”  It’s also a love song to the democratic splendor of a city whose citizens are as various as the uses they make of their library. From the evidence put forward here, that library is a place where screens are more in evidence than actual books—a fact that adds an ironic echo to the meaning of “ex libris.” But fear not. Wiseman makes it abundantly clear that books may be disappearing, but learning goes on, triumphantly.

What's It All About, Arfid?