A Tale of Two Cities’ Doctors 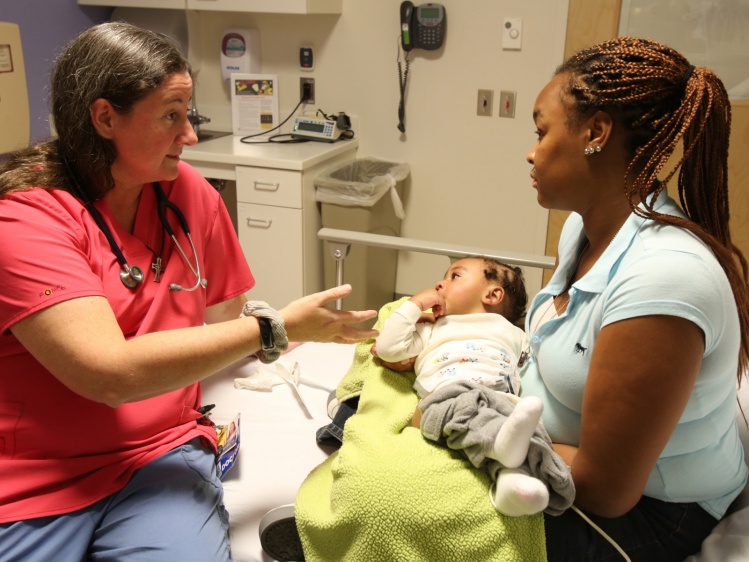 Mercy Sister Karen Schneider, who is a pediatrician, talks with the mother of a child in the emergency room at Johns Hopkins Hospital in Baltimore in 2014. (CNS photo/Bob Roller

Atul Gawande, a splendid New Yorker author who is also a practicing surgeon, wrote an eye-opening article on health-care costs in 2009. He compared two Texas border cities, McAllen and El Paso, both among the poorest cities in the country, heavily Hispanic, and with all the usual adverse health indices of American poverty. The reason for the juxtaposition was that McAllen, measured by Medicare spending, had the second-highest per capita health-care costs in the country. El Paso, however, had almost exactly half the per capita rate of spending as McAllen—while also outperforming McAllen on twenty-three of Medicare’s twenty-five quality metrics.

The difference between the two cities’ medical spending was, bluntly, gross “overpractice” in McAllen—doctors there recommending too many unnecessary procedures and tests. At a meeting with a group of McAllen doctors, Gawande posed a hypothetical: a forty-year-old woman experienced chest pains after a fight with her husband. She had no family history of heart disease, her EKG was normal, and the chest pains had gone away. The doctors agreed that fifteen years before in the 1990s, when McAllen’s costs were about the same as El Paso’s, they probably would have just sent her home, with instructions to call if the pains recurred. One said he might give her a stress test, but admitted that it might be overkill.

In 2009, however, they agreed that she would get “a stress test, an echocardiogram, a mobile Holter monitor, and maybe even a cardiac catheterization”—the last a significantly invasive procedure. “Oh, she’s definitely getting a cath,” one of them said. The money-making imperative was distorting practice up and down the service spectrum, to the point where some doctors were taking kickbacks, disguised as part-time consulting salaries, for referring patients to home health-care services.

So what makes this interesting now? In 2015, Gawande made a return vist to McAllen and found astonishing progress. Their per capita spending is still higher than El Paso’s, but inpatient visits had fallen by 10 percent; home health-care spending and ambulance rides were both down 40 percent; and overall spending had fallen by about 20 percent, or nearly $3,000 per capita, for gross savings of almost a half billion dollars. Part of the impetus came from Gawande’s 2009 article. His criticisms became a cause célèbre for the local press and television stations—especially the revelation that McAllen’s per capita health-care costs were higher than its per capita income. And some of the doctors were prosecuted for fraud.

Much of the change, however, was generated by an “accountable care organization,” or ACO, from a health-management firm named WellMed, a company that attempts to provide an integrated-care plan for its patients, managed by primary-care doctors, who provide more hands-on care than in the old model, and control unnecessary testing and procedures. Further proof of the success of WellMed’s approach was that in the Texas cities where they already had centers, patient death rates were half the state average.

The United States provides the worst care to “normal” people, while charging the highest prices in the world
sharetweet

Gawande followed a case of an elderly man, with limited reading skills, undergoing a diabetic crisis. The primary-care doctor said that in the old McAllen paradigm, he would have done some tests then sent the man to the hospital, where doctors would repeat the tests, get his insulin levels back up, and just send him home. Under WellMed, the primary-care doctor brought the man’s insulin to the right level, and then turned him over to a diabetic nurse. She oversaw his insulin regimen, showed him how to keep a logbook on his insulin and blood sugar, and checked in by phone every other day, until she was sure he was fully stabilized. Patient education and close but inexpensive monitoring greatly reduced diabetic crises, saved thousands in emergency-room costs, and had measurable effects on life spans.

The United States leads the world in the technical sophistication of its health-care industry. At the same time, the United States provides the worst care to “normal” people, while charging the highest prices in the world. A whole skein of academic papers have documented how much of the health-care sector follows the 2009 McAllen paradigm—a plethora of high-tech interventions that increase physician income, while often increasing patient risk. These include cancer drugs that may extend a life for just a few months for six-figure prices; unnecessary spinal fusions; inappropriate arthroscopic procedures; and “new” medications that merely replicate available generic drugs at a higher cost. Crucial services, like perinatal care, are often orphaned because they aren’t moneymakers for doctors and hospitals.

The great ray of hope in the Affordable Care Act was that, over time, more and more provider networks would emulate the WellMed model—which itself is modeled after highly successful providers like the Mayo Clinic, Geisinger, and many other providers. Sadly, as the ACA is sabotaged before our eyes, that vision may be a dream deferred.