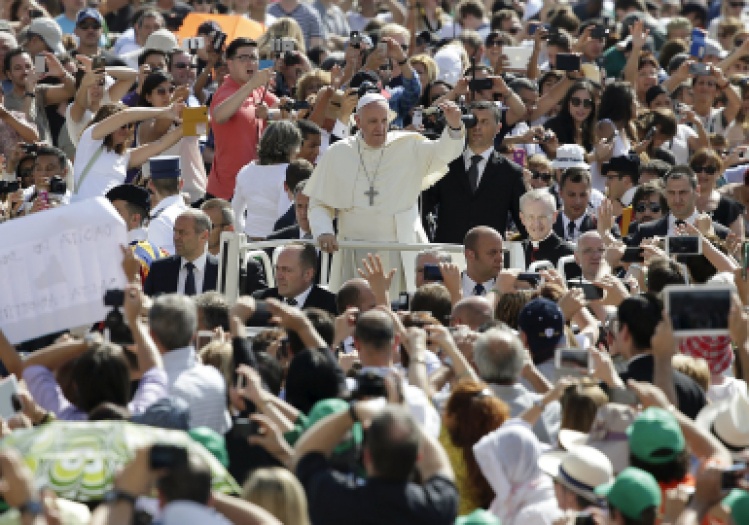 Pope Francis’s encyclical Laudato si’ advocates nothing less than a cultural revolution. In refreshingly readable prose, the pontiff calls on people of all faiths to urgently address a climate crisis of our own making. While the text clearly affirms the scientific consensus about global warming, Laudato si’ is more concerned with political and economic power than with science. In this way, the encyclical draws from and builds on the tradition of church teaching on the environment, dating back to Paul VI and continuing through the pontificate of Benedict XVI.

The scope of the encyclical could hardly be broader. Francis emphasizes solidarity between all God’s creatures, between human beings and the rest of creation. Yet the pope doesn’t shy away from more detailed policy analysis. For example, he urges nations to reduce carbon dioxide and other pollutants.

But the first source of the encyclical, very visible in the introduction, is Francis of Assisi (the encyclical takes its title from Francis of Assisi’s “Canticle of Creatures”). Francis draws inspiration from John XXIII’s Pacem in terris (1963), written during another global crisis—the cold war. Like Pacem in terris, the new encyclical is addressed to people of goodwill, in order to “enter into a dialogue with all about our common home.” Naturally, the pope cites Vatican II (Gaudium et spes), along with the teachings of Paul VI, John Paul II, and Benedict XVI (especially the latter’s Caritas in veritate). Other important citations come from from Teilhard de Chardin and Romano Guardini. He also mentions the letters of bishops conferences (especially the bishops of Latin America and the Caribbean). He also cites the work of Patriarch Bartholomew of Constantinople, who has spoken movingly about environmental issues.

In some ways, Laudato si’ picks up where Evangelii gaudium left off. Francis decries the “culture of waste,” abuses of technology, and profit-mad globalization. As expected, he affirms the scientific consensus on global warming. In order to better listen to what the earth is telling us, Francis writes, the church must advocate for the poor—the first to suffer the effects of climate change. The pope rejects “demographic solutions” (like Paul VI in Humanae vitae, but Francis does not quote that text here), such as population control. He criticizes wealthy nations that leverage the needs of poorer ones for political control. Particularly strong is the pope’s analysis of the relations between politics, the global economy, and information, which is manipulated by business interests. Francis laments that in the debate on the environment, the role of politics is largely absent.

The Gospel calls the church to speak out against whatever threatens the dignity of every human being, including inequality. In this sense, the ecology of Francis is fully prolife: respect for people and respect for other creatures are closely connected. The strongest section of Laudato Si’ is its critique of technocracy (a skepticism shared by Benedict XVI). The “technocratic paradigm” is reflected in our failure to grasp the fact that many of the earth’s resources are finite. For Francis, technology is never neutral—it can be used to ill effect. The market itself will not correct this on its own. Therefore the church itself should offer a unifying voice in order to help us break free from the technocratic paradigm. To that end, Francis urges us to rethink our consumerist excesses: a good relationship with creation presupposes a good relationship with the Creator.

Ecology, according to Francis, always includes care for the poor, for the marginalized, and for nature. It also means protecting culture: the word “inculturation” does not appear in the text, but for Laudato si’ true ecology must be inculturated, not imported with a colonialist mindset. Authentic “human ecology” does not ignore sexual differences: accepting masculinity and femininity is a way of respecting creation, the pope writes, rather than imposing our will on it. In this Catholic presentation of ecology, society has a role in defending the common good, as do nations and governments.

Francis partly blames a failure of global governance for the climate crisis. Here the pope repeats the appeal to a global political authority that began with John XXIII. Where citizens see political corruption, they must resist it. It is corruption, after all, that subjugates politics to financial interests. Pope Francis does not mince words. He calls the financial crisis of 2007-08 a missed opportunity to change the whole economic system (instead, he argues, the West focused on saving large banks). For Francis, the key issue is “redefining progress” in order to bolster politics in the face of an all-dominating, profoundly exclusionary economic system. In this sense, the role of the church is largely educational. Laudato Si’ encourages grass-roots movements of socially responsible consumers, and encourages Catholics to be politically active in various ways.

The encyclical ends with two prayers. In the interreligious prayer, we find Francis’s favored themes: tenderness, the poor, and the “struggle for justice, love, and peace.” The ecumenical prayer calls for the conversion of the rich and powerful toward serving the common good—by protecting the poor and the earth.

Like all Catholic social teaching, this rich document will be subject to interpretation. A few issues seem to me important to understand the impact of Laudato si’ in the United States. First, Francis writes about creation and environment from a cultural perspective that is different from that of many Americans. Francis is a very urban pope, and for him the environment is deeply connected to, and shaped by human beings (the terms “natural law” and “law of nature” do not appear in the text). Second, Francis is not an anti-modernist pope, but neither is he a liberal. Rather, he is a critical progressive. Technology can help us clean up the mess we’ve made—but technology alone is not enough. A “personal and communal” conversion of heart is required. Third, like his predecessors, Francis believes that the common good is served by both individuals and governments. But he is not a “small government” Catholic, unlike those Republican Catholic presidential candidates who have urged the pope to “leave science to the scientists.” The pope rejects the notion of prosperity as a national project. That too won’t sit well with many Americans. A certain level of prosperity, one that entails income inequality, is simply incompatible with economic justice. Fourth, Francis does repeat traditional Catholic teaching on the “life issues,” connecting them with the imperative to care for all creation. But Americans who think of these issues in isolation from economics and the environment will be disappointed. Francis invites us to take a more global view. But whether the half of Americans who deny that climate change is an urgent problem will accept that invitation remains to be seen.