The Future of Inequality 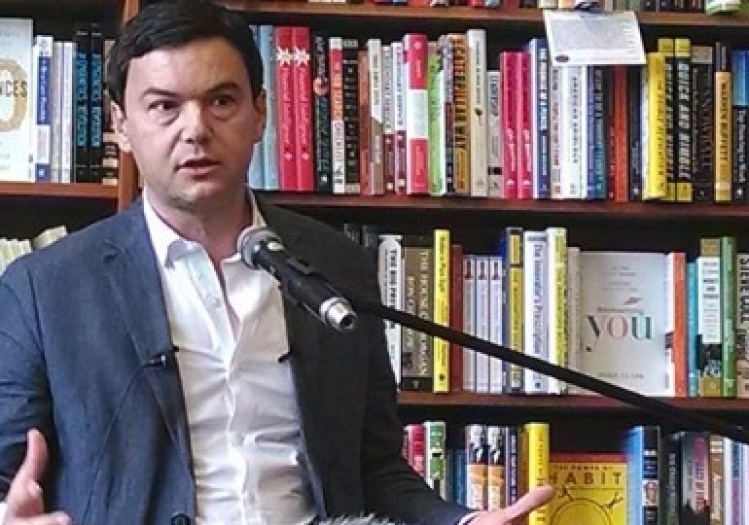 According to the French economist Thomas Piketty, income inequality in the United States is now “probably higher than in any other society at any time in the past, anywhere in the world.” The concentration of U.S. capital, as opposed to income, is not as great as in pre–World War I Great Britain—the world of the first season of Downton Abbey—but taking income and capital together, the United States is now about as unequal as Belle Époque Europe. Indeed, according to Piketty’s data, we now take the laurels as the most inegalitarian nation in the world, and on current trends may soon become the most inegalitarian nation in history—this from a country that invented progressive income and wealth taxation and whose founding documents are a celebration of the common citizen.

In America, Piketty is best known for partnering with Berkeley’s Emmanuel Saez to produce annual reports on the eye-popping income shares of the top-tier U.S. earners. He has devoted his career to studying the metamorphosis of wealth and capital over the past couple of centuries, and has now synthesized his research in an important book, Capital in the Twenty-First Century (Harvard), which paints a compelling, and scary, picture of the deep forces driving toward ever greater inequality in the modern world.

Piketty’s historical focus adds power to his analysis of the trend toward greater financial inequality today. Through much of history, extreme inequality was the normal condition. In Jane Austen’s England, the stock of capital (land, tools, livestock, houses, and anything else that could produce income) was between six and seven times annual national income, and its ownership was extremely concentrated. By the time of the first Downton Abbey episodes, the top 10 percent of British households held about 90 percent of all wealth, with 50 to 60 percent controlled by just the top 1 percent of households.

Between Austen’s day and that of Downton Abbey, the nature of capital changed quite dramatically, with land declining in importance relative to industrial capital. But returns were remarkably consistent—over the very long term, capital returned about 5 percent annually. In both France and England, the wealthy grew accustomed to speaking of their annual returns rather than their wealth. Austen’s Mr. Darcy was known to dispose of ₤10,000 a year, so Mrs. Bennett knew immediately that he had an estate worth an eyebrow-raising ₤200,000. Balzac’s characters spoke in much the same terms, automatically multiplying income by twenty to estimate someone’s fortune.

Although the data in the rest of Europe are not as complete as in England and France, that basic distributional profile seems to have obtained in all the advanced countries. Over the course of the nineteenth century, annual world economic growth was about 1.5 percent, although there was almost no inflation. Since populations were increasing, per capita growth was substantially lower. The stock of capital, however, was typically six to seven times bigger than annual national income. Almost all of that capital was held by the richest citizens, and earned steady 4 to 5 percent returns. Those returns, on such a large bolus of wealth, combined with slow economic growth, virtually guaranteed that the rich could only get richer, while the laboring classes were steadily immiserated. Marx got that part right.

For much of the nineteenth century, the United States was different. It was growing faster than almost anywhere else, and as a young country, its richest families did not yet command fortunes on the scale of the English and French grandees. Still, inequality of both wealth and income grew rapidly after the Civil War, and by the eve of World War I, the richest tenth of Americans controlled about 80 percent of capital, and the richest 1 percent controlled about 45 percent, not yet at the European norm but on a converging track. Still, the United States was considerably more egalitarian than France or England. Rapid economic growth and innovations like universal education ensured that labor was not falling hopelessly behind. In the last quarter of the nineteenth century, the ratio of capital to national income in the United States was only about four to one, and it took until the end of the 1920s to reach five to one.

The one-two-three punch of World War I, the Great Depression, and World War II destroyed the old regimes everywhere, along with much of their physical and human capital. In the wake of the Second World War, discredited oligarchies were swept away by socialist and other left-of-center parties. Confiscatory taxes were imposed on wealth, on estates, and on high incomes. Industrial and financial corporations were subjected to stringent regulation, while newly empowered unions gained fairer splits of business revenues.

The results were dramatic. The ratio of capital holdings to national income dropped from just under seven to one in both Britain and France to less than three to one, a tidal change. In the United States the change was more modest, from five to one to just under four to one, with the difference explained in part by the much greater physical destruction in Europe. As reconstruction got underway, very rapid growth further tilted the field toward labor. In 1950s France, high growth allowed workers to increase their share of the national income at the expense of the capitalists—a first in the record of post-Revolution France. The French still refer to the postwar era as the Trente Glorieuses, or the “Thirty Glorious” years.

It was also a golden age in America. For thirty years after the war, U.S. incomes moved in proportional lockstep: all five income quintiles enjoyed approximately the same rate of income increases, with a small advantage in the lower quintiles. Economists like Simon Kuznets and Robert Solow showed that balanced growth was a central tendency of the American economy. Barring catastrophe, the pattern of equitable division of the economic pie would continue indefinitely. And in America, more than in Europe, individuals of ability and grit could readily move up the quintiles—or move down if they didn’t have the right stuff.

Then came the Thatcher-Reagan revolution. (Piketty speculates that both the United States and England, which still viewed itself as a world hyperpower, were shaken by the rapid modernization on the European continent and in Japan.) Whatever the reason, for two decades they moved in lockstep to strip away the postwar reforms that had reined in the power of the wealthy. Taxes on upper-bracket incomes, investment returns, and estates were drastically reduced. Financial regulations were gutted, and leverage soared.

Especially in the United States, ballooning executive pay drove the vast expansion in the wealth of the top 1 percent. Business spokespeople, of course, claim that the pay is merit-based. But there is no clear statistical relationship between pay levels and performance, and corporate pay outside the United States is typically far lower, without apparent negative consequences. France, Germany, and Japan have managed decent economic performance—although each has had its ups and downs, just as the United States has—while staying much closer to their postwar income distribution profiles.

Piketty proposes a number of reforms—most particularly a graduated annual tax on capital. Even an apparently low top rate, like 5 percent, would be highly progressive since the stock of capital is so much bigger than annual national income, and the same capital would be subjected to taxation each year. Realistically, there is no chance of such reforms, if only because the very rich so thoroughly outgun reformers in Washington, and because Congress itself is becoming a rich man’s club.

But perhaps we can take heart from the experience of Jane Austen’s England. The “rotten borough” system gave the stagnant land-owning class near-complete dominance of the British political system. It took a century, but a persistent reform movement steadily whittled away at the power of the great lords, until it was relatively inconsequential. One hopes that we can do better than that.