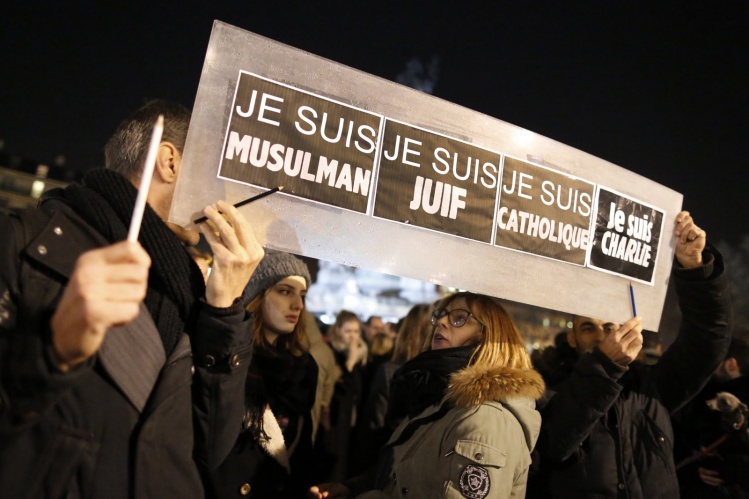 Robin Trémol, nineteen, a third-year student at Institut d'études politiques de Paris (Sciences Po), responds to the anger and threat of further polarization and violence that has gripped France since the terrorist attacks and murders at Charlie Hebdo and the kosher Hyper Cacher supermarket in Paris last week. Translated by Steven Englund, a frequent contributor to Commonweal.

I am the French brother, the human brother. I am someone who can cry but cannot manage to grow angry, who feels just sadness, fear, disgust. And hope.

I am someone just like you who until now has managed to go on thinking and to love humanity with all my heart, smiling at people for no reason, but then at times abhorring mankind until the nails of my clenched fists draw blood.

So I don’t know if I am Charlie Hebdo, or if I am just someone who unintentionally or intentionally lets his rage and hatred flare—like so many. Someone who hasn’t sufficiently borne his courage and shown his intelligence. I am judge and I am guilty, patriot and collaborationist. And I’m sorry about that.

I am sad for France of course, for the journalists and the others who died. But mainly I am sad for mankind. For the person who got shot, but also for him who fired, for anyone who thinks about it. For him who wants “to shoot the first ‘towel-head’” he sees, and for him who dares to write on Facebook “in da face, Charlie Hebdo.” For them, I cry, but for us, too.

Jacques Brel says in a short video that “the drama of humanity is stupidity. Stupidity is laziness; it’s not knowing how to go further, and to stop where you are.” Today, more than any other day, laziness and stupidity are taking us by the hand, whether it is the French who raise their fists in the name of “France for the French” or those who satisfy themselves with the thought, “The shooters maybe did the right thing.” Stupidity and stupidity.

You and I, and they, we all cry, but behind the tears we allow our hearts and our jaws to harden, our stomachs and fists to tighten. Our brains to starve for want of air.

As individuals, we can do nothing, neither save the dead nor punish the guilty, neither change France, transform the cities, diminish prejudice (on either side), or make people think more. We are just the helpless whose eyes brim over with tears.

But one thing remains. Behind our tears, our fists, our regrets, behind the anger over injustice and the wish to do violence, behind the lazy stupidity that is so attractive, there are our hearts, there is the genuine sad concern on the face we turn to others. France will change, for the better and the worse; this earthquake will make waves that will still be felt in ten or fifteen years. Perhaps the National Front will get elected, maybe civil war will break out. Perhaps the French will fall back on themselves in sobs of anger and make war on the extremists and the crazies, on religious and political fanatics who hate.

All right, then, let us weigh in, refusing prejudice, speaking forthrightly, offering our open hands even if they get bitten. For what if the bitten hand is just held out again, and again, won’t people then see that hatred isn’t the end of the matter? That lazy thought and the straitjacket of anger aren’t right, aren’t the final truth? So do we punish the fools and slap the idiots? For some it is already too late. But for the young, perhaps it is not, or not completely.

Do not forget sadness and anger, do not forget or forgive the criminals, but do not accuse all of the rest. Do not let ourselves go overboard in one direction or the other. Stay human and humane.

So no, I am not Charlie; I am not the killer or the cartoonist. I am a person; I am people. I am the guilty and the revenger. I am sad but I am also a dreamer, and the voice of my dream, the voice of intelligence, shouts out at the top of my lungs, drowns out the insults and the drawn knives being sharpened. The voice of my dream will shout until it spits blood, until it cracks. The human, the thoughtful, must now shout, even if they do so without much hope of being heeded—for the dead, for the killers, for mankind.

Think of the dead, speak out for human beings, even if it is only to hurl our words against the wall of impossibility.