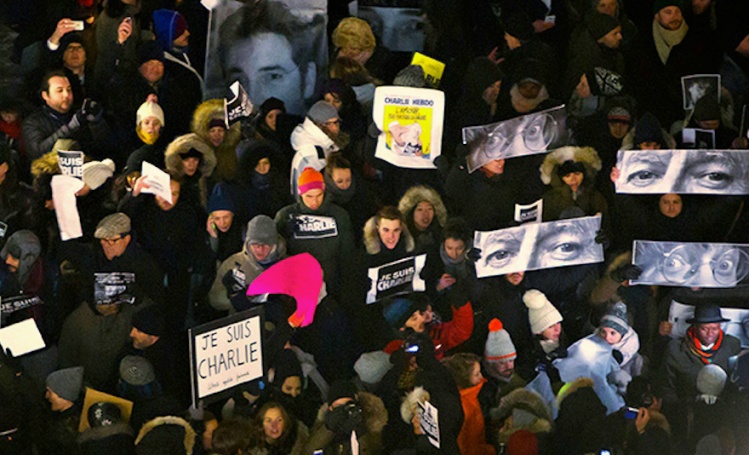 The massacres in Paris were horrific, and people are rightly scared and outraged. Nothing justifies the slaughter, and the Catholic League’s Bill Donohue is dead wrong to claim that the editor of Charlie Hebdo is partly to blame for “the role he played in his tragic death.” Stéphane Charbonnier and the others who were killed were victims of an evil terrorist act (as were those murdered at the kosher Hyper Cacher supermarket), and to suggest they somehow contributed to their own deaths is to go too far toward justifying the killing.

In the reaction to the massacre, however, those who died at Charlie Hebdo have been claimed not only as victims but as heroes and martyrs for free speech and tolerance. This makes me uneasy. Not every victim is a martyr, and one does not become a hero simply by offending people. Hustler’s Larry Flynt did not make himself a hero of free speech by running cartoons of women being gang raped as “entertainment.”

People who defend the right of people to offend, on the other hand, sometimes do act heroically. Some might claim the ACLU as heroes for defending the right of neo-Nazis to march in the heavily Jewish town of Skokie, Illinois. No decent person, however, would claim Frank Collins and his pathetic band of Nazis as heroes for trying to provoke the citizens of Skokie.

As the Skokie case illustrates, the right to offend is rarely as clear-cut as defenders of free speech make it sound. A friend of mine who lived in Skokie for years has remarked on how odd it is that you can march down the middle of the street brandishing swastikas and chanting anti-Semitic slogans, but you can’t smoke a cigarette within thirty feet of a public building. The difference between the two acts can be explained in terms of the difference between speech and acts—or “names” and “sticks and stones”—but even liberal societies recognize that some kinds of speech can break bones. At all levels of society there are sanctions against “hate speech.” Although Germany today is a liberal democracy, it is illegal to march there under the Nazi banner, because some kinds of speech have real consequences.

The editors of Charlie Hebdo themselves recognized the importance of some limits. In 1996, they gathered 170,000 signatures on a petition calling for the right-wing National Front party to be banned. In 2000, journalist Mona Chollet was fired from the magazine after protesting an article by editor Philippe Val in which he called Palestinians “non-civilized.” In 2008, Val fired veteran cartoonist Siné over an article deemed anti-Semitic.

Tolerance is not only a legal principle that leans against criminalizing unpopular forms of speech. Tolerance is also claimed by liberal society as a virtue, a habit of respect for the deeply held convictions of others, even those very different from one’s own. But the banner of tolerance today is ironically being claimed by those, like historian Timothy Garton Ash, who are insisting that the offensive cartoons of Muhammad be republished as widely as possible, lest the terrorists be seen to have “won.”

Defenders of free speech often attribute to Voltaire the famous sentiment, “I disapprove of what you say, but I will defend to the death your right to say it.” Muslims might be excused for being astonished at people who sneer at the world’s great faith traditions but declare themselves ready to die for Nazis, pornographers, and bigots. This is not the best that the Western tradition has to offer. If we want peace, we should mourn the victims of violence and reject the totalitarian impulse implicit in terrorism. But in doing so, we must not glorify contempt for the non-secular “other,” those many Muslims, Christians, and Jews who do not think that blasphemy, racism, and pornography are something to celebrate.