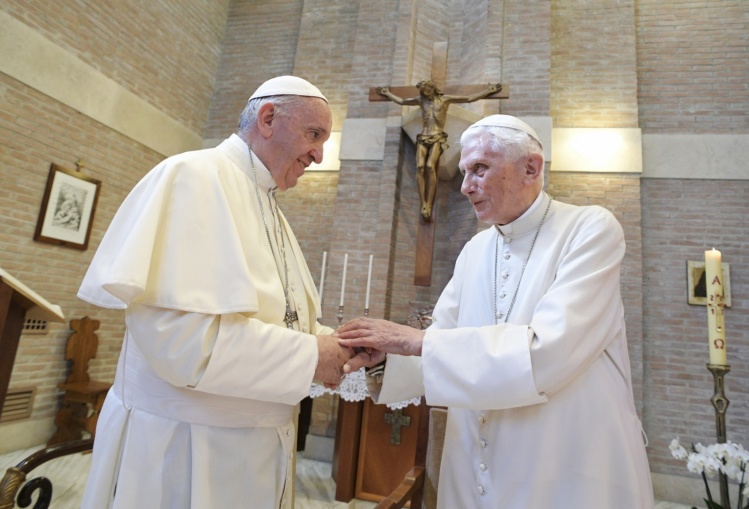 Pope Francis greets Pope Emeritus Benedict XVI at the retired pope's residence after a consistory for the creation of five new cardinals at the Vatican June 28. (CNS photo/L'Osservatore Romano)

No pontiff writes an encyclical alone; such a document passes through many hands before it reaches its intended audience – Catholics worldwide. Seeking a papal mind in an encyclical will yield as well the conversation of a papal reign, where its author is a kind of Supreme Court chief justice representing not only the other justices’ opinions but clerks, lawyers, and wider opinion extending and modifying prior tradition. Yet Francis openly tells his readers that he is just the final redactor of Lumen fidei and practically invites them, from enthroned bishops down to lay faithful, to sort out his contributions from those of his recently resigned predecessor, Benedict XVI.

The encyclical evokes that nearly unprecedented commencement of Francis’s pontificate – the presence of a pope emeritus and highly regarded theologian retaining some authority, despite seclusion in a Vatican convent. Both popes knew that the encyclical would have an antiphonal sound; if they teach jointly and in agreement, they nonetheless play different chords. Francis recently called Lumen fidei “the work of four hands” and tacitly invited its readers to listen to it as they would to Stravinsky’s Five Easy Pieces/Four Hands, with its divergent melodies for two instruments.

Yet because this work concludes Benedict’s trilogy of encyclicals on the theological virtues of faith, hope, and love, the stronger authorial hand belongs to the emeritus. His previous encyclicals provide the background for this one, and help explain it.

After his election in 2005, Benedict published three encyclicals over his own name: Deus caritas est (2005); Spe salvi (2007); and Caritas in veritate (2009), to update Paul VI’s Populorum progressio [updated*]. Readers of the first, a strong criticism of free-market neoliberal capitalism, will see the outline of the trilogy that followed in a passage like this: “Faith tells us that God has given his Son for our sakes and gives us the victorious certainty that it is really true: God is love! It thus transforms our impatience and our doubts into the sure hope that God holds the world in his hands and that, as the dramatic imagery of the end of the Book of Revelation points out, in spite of all darkness he ultimately triumphs in glory.”

And this passage is a startling reminder that Benedict’s thought transmits a now-remote apocalyptic eschatology, the earliest Christian dialectic against the “world.” Does this dialectic, so characteristic of the theologian Joseph Ratzinger’s late work, rest uneasily beside the later tranquility of the cardinal virtues as they prepare the way for the three that “remain” – faith, hope, and love? (1 Corinthians 13:13) The Catholic moral tradition has not often paired them, as Benedict does, with a lively expectation of the end of the world and the triumph of the saints.

But this passage also links both the genre and the thought of Benedict’s encyclicals to the earliest encyclical letter of all – not, as historical accounts repeat, the so-called “First Letter of [Pope] Clement,” a letter ascribed to a bishop of Rome but actually written by that church’s presbyters of Rome to the quarrelsome and fractious Christians of Corinth. The first real encyclical was that wild letter to the seven churches of Asia Minor found at the end of the New Testament, now rarely read in church. For the Book of Revelation expresses not only hope in the arrival of the city of God – a hope also expressed in the final section of Lumen fidei – but a prediction of war between truth and deception, the hosts of God and the agents of his ancient enemy.

Not that Benedict expects the imminent end of the world – early Christianity rejected this and sidelined prophecy – but he understands the gospel and human society to be at odds, particularly so in secularist modernity. Sometimes his writing echoed the more pessimistic of the popes of the nineteenth and twentieth centuries, when they felt their backs were against the wall.

This customary dialectic also puts Benedict in agreement with his main patristic inspiration, Augustine. For like Luther and Calvin, Benedict is clearly an Augustinian, and like them he seeks renewal by returning ad fontes – to the sources. Like Augustine he emphasizes divine power, not human effort; grace and not free will; the city of this world versus the city of God, to which all Christians are pilgrims and therefore must gain a strong orientation toward the transcendent; and the orientation, hence, of the Christian who possesses faith, hope, and love, toward the consummation of the world.

Thus Augustine wins the day with Lumen fidei: fully a third of the footnotes are to his writings (and twenty-seven of the fifty to other early and medieval church fathers). The second-century Irenaeus--heresiologist and proponent of tradition, episcopal authority, and millennialism--is the runner-up. And Augustine wrote an Enchiridion on Faith, Hope and Charity in 420, after the long and contentious interpretation of Paul’s letters at the end of the fourth century; he sketched out themes in that work that he developed more fully in later works, or left for others to take up after his death.

Francis’s own encyclicals are yet to come. But he seems to have an approach different from his predecessor’s. If his encyclicals resemble his recent sermon in Lampedusa, they may turn from that perhaps insoluble intellectual problem of faith that has so occupied Benedict. In his sermon Francis spoke of the “globalization of indifference” to the suffering poor, an indifference shared by church and world; he may now concentrate upon their shared obligation: compassion for the suffering.

The encyclicals of the last two popes – from Fides et ratio to Lumen fidei – treated faith primarily in its objective sense (Romans 1:5), as an inward belief and outward stance against doubting modernity – a conundrum of the nineteenth- and twentieth-century theology curriculum and culture warriors on the march. In contrast, Francis has already associated unbelief with “the anesthesia of the heart,” a symptom of morbid contentment; perhaps with his circumspect contribution to Lumen fidei he is already beginning to issue his social encyclicals.

*Updated 7/15/13 to reflect revision that Caritas in veritate, not Deus caritas est, updates Paul VI's Populorum progressio. The author would like to thank Fr. Robert P. Imbelli for noting this.