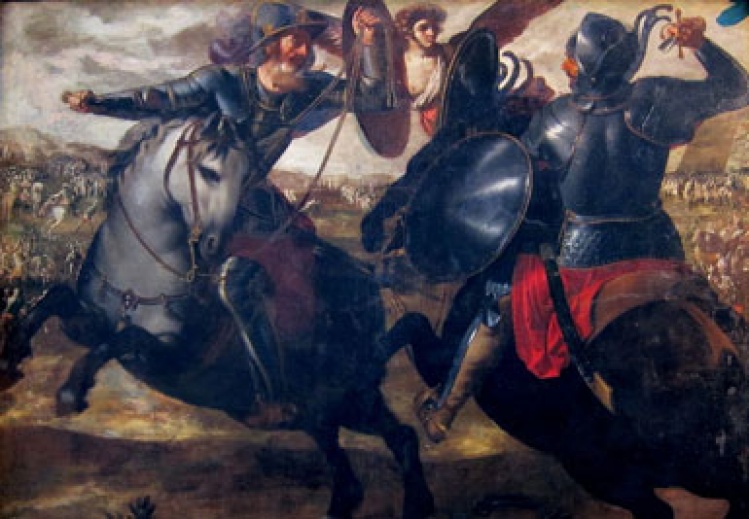 In the wake of his September 10 speech outlining his strategy against ISIS, President Barack Obama came under fire from across the political spectrum for his claim that the terrorist organization is “not Islamic.” Atheist author Sam Harris argued on his blog that ISIS can only be understood in light of the fact that “a belief in martyrdom, a hatred of infidels, and a commitment to violent jihad...are supported by the Koran and numerous hadith.” On Fox News, conservative commentator George Will scoffed, “ISIS says it’s Islamic. Lots of people say it’s Islamic. Only the President won’t.”

Perhaps they should all read Karen Armstrong’s latest book, Fields of Blood: Religion and the History of Violence. Armstrong is known for her thoroughly researched and clearly written books on religion, many of which cut through simplistic truisms about religion and society. Her new book challenges the idea that the relationship between religion and violent conflict is simple and direct. By tracing the history of violence from the rise of agrarian societies to the present and exploring its role in the development of major religions, Armstrong aims to show that religious traditions speak with many voices on matters of violence and warfare. Although she occasionally falls back on platitudes of her own, her book makes a convincing case that the relationship of religion to violence is complicated and ambivalent.

Organized violence, as Armstrong tells it, was not initially a product of religion. It was a product of agrarianism. With the development of agriculture, people were able for the first time to form stable communities that could produce more than they consumed. These agrarian societies were under constant threat from environmental disaster, as well as from bands of travelers who made their own living through organized theft. A small group of elites came to dominate their communities, offering protection in exchange for tribute. The elites supported themselves with the proceeds of the peasants’ land and labor. The only way to expand their income was to expand the amount of land and the number of laborers under their control. Warfare was the means for this expansion. Territorial claims and resource control—political and economic concerns—have been mixed up with violence ever since.

Here, Armstrong says, is where religion enters the picture. Myth and ritual could make violence meaningful, justifying the brutal lives of peasants and warriors. But Armstrong shows that people also found resources in religion to question this form of life, challenging the systemic violence and economic injustice of the agrarian society. In ancient Aryan societies, for example, “no myth ever had a single definitive meaning; rather, it was constantly recast and its meaning changed. The same stories, rituals, and set of symbols that could be used to advocate an ethic of war could also advocate an ethic of peace.” Aryan reformers would draw on the old stories with new aims—to deny the legitimacy of war and conquest. Nevertheless, throughout the ancient world, the desire for political and economic control continually trumped prophetic cries for peace and social justice.

In Armstrong’s account, Judaism, Christianity, and Islam all began as alternatives to the systematic violence and economic injustice of empires. The belligerent acts of later adherents, she suggests, betray the radical and prophetic origins of the monotheistic religious traditions. Armstrong’s account is strong-est when she shows how monotheists, once they were no longer at the margins of society, drew on their respective traditions to make decisions about how to protect the community from internal and external threats, how to support it economically, and whether and how to expand its reach. The recognition and eventual adoption of Christianity by the Roman Empire linked the teachings of Jesus with the aristocratic rule and imperial violence he had criticized. Yet it is too simple to say, as Armstrong sometimes seems inclined to do, that Christianity was perverted by its association with statecraft and economics. As a religion with a long history of such associations, Christianity has a well-developed tradition of thinking about the responsibilities of rulers and the ethical limits of violence. The just-war tradition is one ongoing attempt to think through these questions. So is Christian pacifism—and, moreover, so is Christian realism (of which Obama is the latest prominent adherent). As the philosopher Alasdair MacIntyre said, a tradition is “an argument extended through time”—and among the important things religious traditions argue about is the ethics of violence.

Armstrong’s premise is that the relationship between religion and violence is and has always been complex, and that we need to examine the details of particular conflicts and their historical context in order to understand the role that religion plays. However, she can only supply so much detail and contextualization in a book-length survey of the history of violence. As a result, Armstrong sometimes makes her own overly simplified claims, such as declaring that this or that example of “religious violence” isn’t really religious after all.

This happens, for example, in her discussion of a group of radical Zionists who believed that the destruction of the Dome of the Rock in Jerusalem would bring about the Messianic redemption. Although she notes that their belief was rooted in Kabbalistic philosophy, Armstrong writes, “far from being inspired by their religious tradition, the militants’ conviction violated core teachings of Rabbinic Judaism.” Instead, she emphasizes the historical and psychological motivations for their acts: “The Dome as a perceived symbol of Jewish humiliation, subjugation, and obliteration fed dangerously into the Jewish history of grievance and suffering, a phenomenon that, as we have seen, can fester dangerously and inspire a violent riposte.... Hence Jewish radicals, with or without rabbinic approval, continue to flirt with [Menachem] Livni’s dangerous idea, convinced that their political designs have some basis in eternal truth.” Armstrong’s own insistence on the complexity of religion, however, would lead one to acknowledge that Rabbinic Judaism—like Christianity, like Islam—is a multifarious tradition involving not only its foundational texts but also lived practices, social structures, and ongoing arguments about how we ought to live.

In cases like these, it is enough to recognize that religions are internally complex—that they speak with multiple voices—and that religious motivations are almost always tied up with political and economic ones. That recognition would complicate Obama’s claim that ISIS is not religious, as it would confound the conclusion that Islam is essentially violent—or even that ISIS’s motivations and goals are primarily theological ones. It could also clear the air for those peaceful and prophetic voices Armstrong longs for to cry out and be heard once more.

Molly Farneth is assistant professor of religion at Haverford College. Her book Hegel’s Social Ethics will be published by Princeton University Press in summer 2017.

Old News: The World Is Not Christian