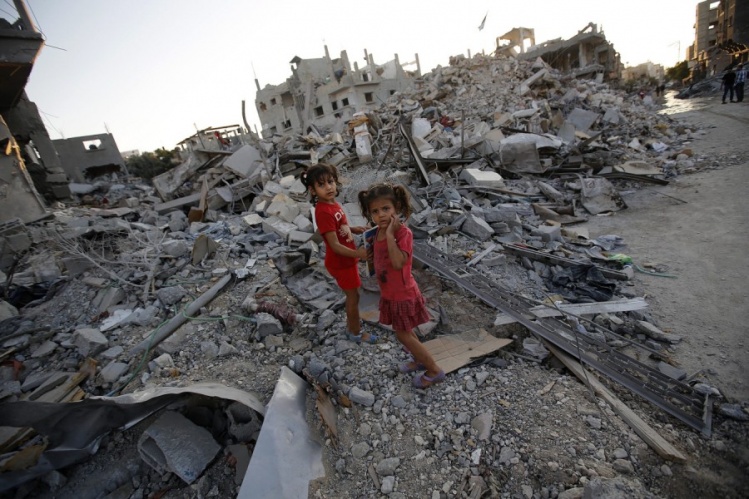 Kierkegaard taught that you don’t really know what your opinions are until you’re required to act upon them. Unless you have had to sacrifice something for justice, for example, you don’t really know what you believe about justice. The Danish philosopher might have gone slightly overboard in his talk against empty talk, but I think he has a point. I humbly acknowledge that I have never been in combat, never had to rush to a bomb shelter to take cover from incoming rockets, and so I offer this short reflection on the Israeli military action in Gaza as someone who has always been on the sidelines of war.

Israel’s bombing and invasion of Gaza is morally troubling in itself, but it also raises questions about the ethics of military strife in an era when war has become asymmetrical—that is, when one side has all the technological tools of destruction and the other has only rocks and primitive rockets.

Just-war theory is a set of beliefs that reaches back at least as far as Augustine. Within this theory, jus ad bellum concerns the justice of going to war in the first place, while jus in bello concerns justice in the conduct of war. These two sets of criteria have promised a way to establish the moral parameters of armed conflict.

According to this theory, it is unjust to enter into a war without first exhausting every peaceful means of resolving a conflict. In asymmetrical situations, however, resorting to power first is a powerful temptation. When one country has an impenetrable air defense and the most advanced weapons technology on the planet, while its enemy’s weapons are outmoded, the more powerful country is likely to rush to the conclusion that drones and tanks are the only good option. It should be just the opposite: the side with the vastly superior military force—and thus the capacity to unleash another magnitude of havoc—should show more restraint, not less. After the tragic murder of three Israeli boys and the arrest of hundreds of Palestinians, Hamas fired a fusillade of rockets into Israel. Whether Israel did everything it could to avoid the conflagration of violence that followed is an open question.

A central tenet of jus in bello is proportionality. As Brian Orend describes this regulatory principle, “Proportionality for jus in bello requires tempering the extent and violence of warfare to minimize destruction and casualties…. The principle of proportionality deals with what kind of force is morally permissible.” “Kind of force” can also be understood as degree of force. So, according to the rule of proportionality, it would be immoral to turn a country upside down because it’s perceived to pose a minor threat. Orend continues, “At the battle of Omdurman in 1898 in the Sudan, six machine gunners killed thousands of dervishes—the gunners may have been in the right to defend themselves, but the principle of proportionality implies that a battle end before it becomes a massacre.”

In a recent essay in the Boston Review, philosopher Frances Kamm contends that the principle of proportionality has nothing to do with comparing levels of military casualties but demands only that the use of force be “proportionate to the goal of the war or an individual military action…. Harm to enemy combatants, whether deliberate or produced as a side effect, is not standardly thought to count against achieving the goals of a military mission. This is one reason why military actions are not considered disproportionate if many more enemy combatants are killed than one’s own combatants.”

Just-war theory is not a legal document with codicils but an evolving tradition. Kamm’s suggestion that just-war theory permits the one-sided slaughter of combatants is, I think, problematic. The theory first began to develop at a time when war was reasonably expected to involve a reciprocal risk. In asymmetrical conflicts, the combatants of the weaker side can be so out-matched as to be virtually defenseless. In such cases, battles become outright massacres, à la the mowing down of the dervishes in Sudan. Massacres often destroy the prospects for long-term peace—always the final aim of just-war reasoning.

Israel’s defensive offensive has so far cost the lives of more than 1,900 Palestinians, 80 percent of them civilians and many of them children. According to the UN, over ten thousand Palestinians have been wounded. Thousands more have had to flee from their homes because of the bombing and artillery fire, and many of the displaced have sought sanctuary in UN-run schools, which the Israelis have also bombed. And yet, as the New Yorker reported last week (“Aflame,” August 4), "Israel’s Ambassador to the United States, Ron Dermer, suggested…that the Israeli Defense Forces should be awarded a Nobel Peace Prize for the ‘restraint’ and the humanity of their assault.”

All the exits from Gaza are closed, so there is no way to flee the fighting. Many have likened the Gaza operation to shooting people in an open-air prison. To date, three Israeli civilians and sixty-four soldiers have perished. It may be hard to conjure up a formula for disproportionality, but as Kamm points out, the destruction that Israel has wrought seems out of proportion to the destruction it is defending itself against. Therein lies the breach of the proportionality clause. Of course, Israelis will argue that unless they close the network of tunnels from Gaza, Israel will be vulnerable to new and much more dangerous attacks from Hamas.

One of the most basic rules of just-war theory requires warring parties to distinguish between combatants and noncombatants. This was easier in ancient times than it is today. Nevertheless, rigorous efforts must be made to shield noncombatants from harm. For example, when one side can either destroy an enemy without peril to itself but with a high risk of “collateral damage” or can achieve the same objective in an action that puts more of their troops in harm’s way but minimizes the peril to noncombatants, the just-war tradition prescribes taking the path of greater risk to one’s own side. Though Israelis usually warn Palestinians when their homes are about to be bombed—as if there were some safe place for them to escape to—it is far from clear that they have made enough effort, or taken enough risks, to avoid harming noncombatant Palestinians.

Writing in Tablet, Leil Leibovitz argues that Hamas has been so repressive and cruel to its own people, such an enemy of freedom and justice, that those who worry about just war should unfurrow their brows and let Israel rid the world of this threat to liberty. Leibovitz warns:

Enthusiasts of nuance may argue that criticizing Israel isn’t the same as supporting Hamas. That is nominally true. It’s also largely irrelevant. Let’s indulge in one more thought exercise and assume for one moment that Israel accepted all the liberal critiques of its behaviors and acted accordingly. The force it was using was disproportionate? It withdrew most of its soldiers, curbed its artillery, and pulled back the deeply unfair advantage of the Iron Dome missile defense system…. You don’t have to be a three-star General to realize the outcome of such moves.

All “enthusiasts of nuance” will of course be quick to point out that no one has suggested that Israel dismantle its air defenses. But Leibovitz is probably right in supposing that serious efforts to avoid civilian casualties in Gaza would put more Israeli soldiers at risk. Leibovitz concludes, “Which leads us back to a terrible observation: wars are so ghastly in part because they crush so much of the ambiguity and nuance that permeates everyday life in times of peace. They’re so awful because often they force us to make stark choices that are scary and absolute, and annihilate so much of the space that exists in between polar opposites.”

Leibovitz and other despisers of nuance believe that if you deem your foe to be evil enough, then anything goes in the fog of war. But as Kierkegaard never ceased to remind us and himself, we humans are creatures with a nasty bent toward pulling the wool over our own eyes. We are much inclined toward seeing matters the way we want to see them. In the case of asymmetrical war, we are primed to demonize our foes as subhuman “terrorists” who really have no reason to be fighting in the first place.

And yet, if Hamas is as dastardly as Leibovitz contends, then this is what Israel’s leaders should be saying: “Hamas is holding both the people of Israel and Gaza hostage; how can we free both of our people from them without killing the hostage?”