By Ellen B. Koneck
War and Peace 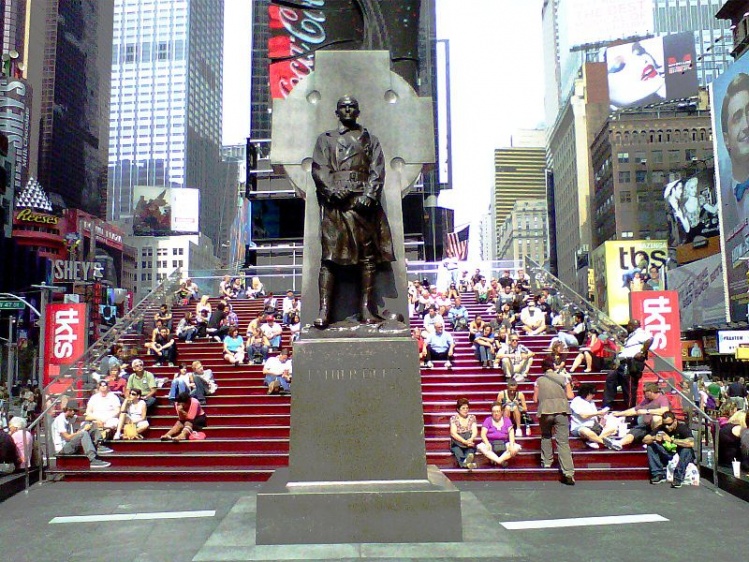 During my last semester at Yale Divinity School, I managed to convince a professor of American history to oversee an independent study on the intersection of American morality and military. Early on in my reading (and with great consistency) a name began to appear: Father Francis Patrick Duffy. ‘The most decorated army chaplain in American history,’ my textbooks told me, ‘America’s favorite priest,’ these histories insisted—and I couldn’t resist. He was everything I hoped for in a case study on the sometimes overlapping, sometimes opposed agendas of American Catholicism and American Militarism. I checked out every book that mentioned him and dove headlong into his life.

This turn-of-the-century-cleric managed to confound, elude, and exceed expectations for the myriad of roles he played throughout his life: A man of the cloth and the uniform; a member of ‘the old faith’ and an early ecumenist; a professor of philosophy, a parish pastor, and a patriot; a Canadian-born Irishmen who set records in his service to the American military. Early in his life, the Catholic Church found him suspect for his promotion of liberal, modernist philosophy (which at the time was condemned as heresy), but by the time of his death, Patrick Cardinal Hayes—the leader of the Archdiocese of New York—declared that “the church will long mourn the loss of a most devoted son.”

If I’m being honest, the consistency with which he earned such an abundance of rare distinctions made me skeptical. Duffy sounded more myth than man.  I didn’t believe his story to be anything more than some modern, American hagiography—after all, religious and military cultures alike depend on the inspiring stories of their canon of saints and heroes. I figured Father Duffy was one of those hybrid-mythic-historic figures in which we ‘believe’—with a wink and a nod.  He functioned, I suspected, as a symbol for the ideal; the kind of historical ideal we might think we’re referring to when certain crowds want to ‘make America great again’ but which perhaps never actually existed.  In my attempt to discern the man through the thick cloud of praise that surrounded him, I found myself operating out of a hermeneutic of suspicion (if you’ll allow me the phrase) as I began reading various historical works—including the diary he kept during his time in France during World War I.

Duffy’s famous text, Father Duffy’s Story: A Tale of Humor and Heroism, of Life and Death with the Fighting Sixty-Ninth, served as the loose basis for the 1940’s Hollywood movie about World War I, “The Fighting 69th!” starring Pat O’Brien as Duffy himself.  I learned that before he was a chaplain in the Spanish-American War for the New York Fighting 69th Regiment—famously referred to as the Fighting Irish 69th (and then the renamed-Rainbow Division) Father Duffy was a professor of philosophy at a seminary in New York. After surviving both wars he returned to Manhattan, where he became pastor at Holy Cross Church on 42nd Street in Times Square. Just steps from that parish, where he served faithfully for many years, the legend himself is solemnized by a bronze statue of Duffy in his military uniform, stoic against a 17-foot granite Celtic cross in the heart of Times Square.

And if an oversized monument in Times Square weren’t enough to convince a person of Duffy’s larger-than-life reputation, the lofty praise of the editors of Commonweal upon his death in 1932 surely will:

He was a brilliant scholar, a witty talker; he had an almost fabulous physical bravery, which made him a legend among the lifesavers during the war; and earned him practically every earnable decoration; and, to crown it all, a handsome, electric presence, very much in the military manner.

Despite my skepticism over all his accolades (and, to be fair, my skepticism about our collective capacity for honesty in the American memory) I was pleased—and sincerely surprised—to find that Father Duffy wasn’t reflexively patriotic, as my cynicism had subconsciously assumed. Rather, he was sober and calculated about the gravity of war. He spent his chaplaincy burying the dead, hearing confessions, exhorting the soldiers to virtue, and writing letters—over 100,000 in all—to the families of living and fallen men back home.

A dozen books and countless anecdotes confirmed Duffy’s seemingly impossible perfection. I read texts that catalogued the work of World War I chaplains; the poetry of Joyce Kilmer, who became a dear friend of Duffy’s while they served together in France; I visited his statue in Times Square; I read accounts of the thousands of people—all claiming to be Duffy’s close friend—who processed down 5th Ave for his funeral Mass at St. Patrick’s Cathedral. I tried everything I could not to fall for the folklore, only to reluctantly admit that he was, indeed, much more than a myth.