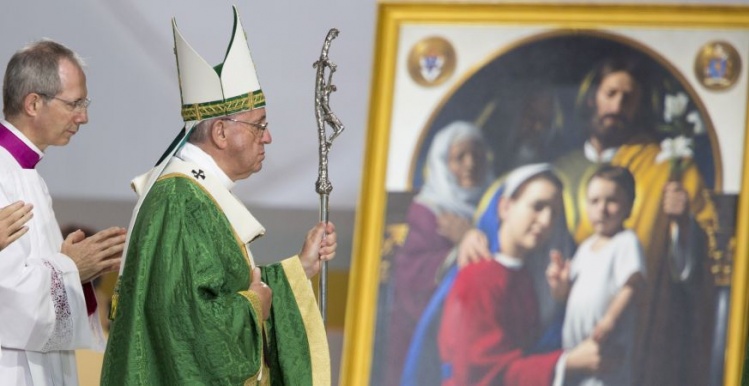 Pope Francis’s clandestine meeting with Kim Davis, the Kentucky county clerk whose refusal to issue marriage licenses to same-sex couples has made her a hero to many on the right, will soon become a footnote in the history of the pope’s visit to the United States. Or so one hopes. What Francis had to say to Congress about the responsibility of legislators to find common ground and to the UN about the ecological crisis should be of more lasting consequence. His remarks at the World Meeting of Families in Philadelphia also deserve greater attention, especially now that the Synod on the Family is underway in Rome.

Addressing bishops taking part in the meeting, Francis spoke of the economic and cultural pressures that make family formation difficult today. He noted that the civil institution of marriage no longer reflects traditional Christian understandings of the nature and purpose of marriage and family life. Francis further lamented that too often relationships are thought of as “means” for the satisfaction of individual needs rather than ends in themselves. He compared the situation to how supermarket chains have replaced neighborhood stores, where business was conducted on the basis of trust and permanence. “Today’s culture seems to encourage people not to bond with anything or anyone, not to trust.” Competition and consumption are the guiding principles, “a consumption which does not favor bonding, a consumption which has little to do with human relationships.” The result, the pope argued, is a “radical loneliness” and fear of commitment. The young are averse to the risks involved in marriage and bringing children into the world.

To a certain extent, this is a familiar critique of the modern family. The historian Christopher Lasch made a similar case nearly forty years ago in Haven in a Heartless Word: The Family Besieged and The Culture of Narcissism. Like Francis, Lasch argued that the pressures of the impersonal modern economy and the imperatives of our consumer culture undermine the independence and authority of the family. Instead of a haven of resistance, families are overwhelmed by the nihilism of popular culture and the relentless demands of economic necessity. The result is loneliness and alienation, and an inability to form lasting bonds or communities. “Meanwhile, life goes on, without really being lived to the full,” Francis observes. “For knowledge of life’s true pleasures only comes as the fruit of a long-term, generous investment of our intelligence, enthusiasm, and passion.” That’s what the traditional family was about.

Yet Francis is not just offering a counsel of despair. Quite the opposite. Like Lasch, the pope knows that pious talk about the family is meaningless without political action that leads to economic reform. Nor does he blame the young. They have come of age in a culture at odds with fundamental aspects of the Christian ideal of marriage. Rather than scold, it is a shepherd’s duty to “seek out, to accompany, to lift up, to bind up the wounds of our time.” No one, Francis insists, can be excluded in that missionary work.

It is this part of Francis’s message that seems to perplex his conservative critics the most. If the church does not condemn sexual immorality, if it does not teach the truth about marriage, how will the young be converted? How will traditional marriage be restored as the foundation of our moral and social economy? Francis’s answer is as traditional as it is disarming: He believes the world can be remade, “not by incessantly ‘explaining’ [church] teachings,” but through acts of Christian love and understanding. This is a daunting challenge.

Writing in these pages thirty-five years ago in the wake of the collapse of the Carter administration’s Conference on the Family, the theologian Stanley Hauerwas suggested that “our problem is that we no longer can describe what the family should be and/or why we should think of it as our most basic moral institution.” We even lack a “normative sense of what it means to be a parent.” We speak fluently of individual autonomy, of freedom, rights, and choice, but have a hard time making sense of notions such as duty, sacrifice, and loyalty. Everywhere we turn, the focus is on the here and now, yet families tie us to the past and to the future, binding us to those who have come before and those who will come after. Some of these obligations are given to us rather than chosen. Perhaps it is the unbidden dimension of family life that explains its hold over us, for as Hauerwas notes, family ties “bind time” and situate us in history. This is not to idealize family life. Francis is quick to point out that there is no such thing as a perfect family. Yet it is within families that we learn—or fail to learn—what it means to be responsible for one another. No wonder Francis thinks that in order to repair the world you must begin at home.