What I Saw at a Protest Against Trump’s Border Policies
By Santiago Ramos
Immigration
Social Justice
Donald Trump
U.S. Catholicism 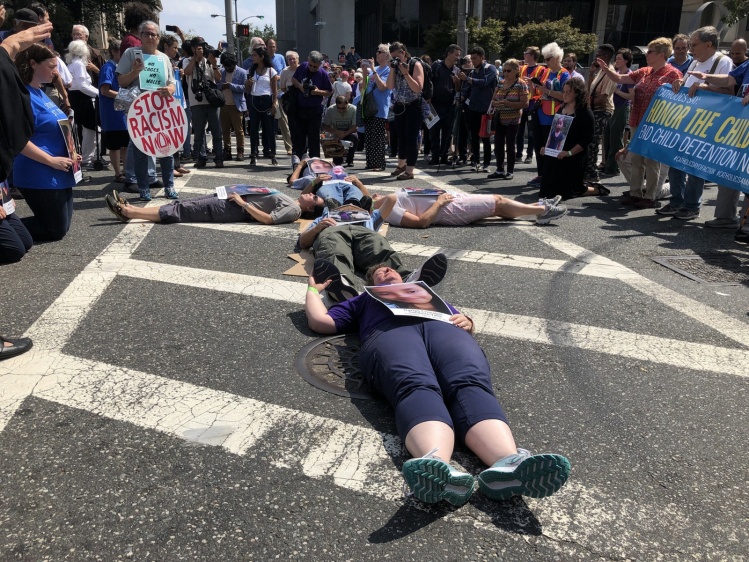 On the morning of Tuesday, September 4, approximately five hundred people gathered in St. Mary’s Abbey Church in downtown Newark, New Jersey. Students, professors, and activists crammed together alongside priests, nuns, and a bishop, filling the pews and spilling into the narthex and the choir loft above. They met for prayer and protest for the sake of ending, as their public statement puts it, “the inhumane treatment of migrants as well as…both child and family detention.”

The event took place a few weeks after the Trump administration announced that it would end the legal agreement that placed limits on the amount of time migrants could be held in detention. While migrant detention has been an issue since the Obama administration, it is the detention of minors, separated from their families, that has raised the issue to national consciousness. According to recent estimates, around two hundred children remain under detention today. That number is down from 2,700 last May, but the children are still being held in squalid conditions—“in cold cells without proper clothing or adequate food,” as one lawmaker put it.

As I pushed my way into the packed, hundred-year-old red-brick church, I saw three stacks of glossy posters sitting on a table, freely available to all participants. The first was a blue sign that read, “Stop the Inhumanity!” The second was a black-and-white icon of the Holy Mother and Child behind a chainlink fence; I later learned that this icon is known as the “Protectress of the Oppressed,” written by artist Kelly Latimore. But it was the third image that got to me: an image of a smiling, sixteen-year-old Central American boy, his name and age in black letters at the bottom. I flipped through the stack: more faces and names of children who had crossed the desert, some as young as five.

From the heights of the choir loft I looked down at the lectern, where various speakers addressed the crowd. Fr. Dennis Barry of the New Jersey Shrine of St. Joseph tried to capture the moral claim at the heart of the event: “How we look at one another affects what we do.” Almost everything about the gathering—down to those glossy images of refugee children—was intended to make sure that certain human beings are not hidden from view, either by the legal bureaucracy in charge of handling migrant and refugee cases, or by the abstract policy discourse that has the power to determine their fate, or by the walls of a detention center.

Several speakers offered prayers and reflections, after which the group processed to the Peter Rodino Federal Building on Broad Street a few blocks away, which houses the local headquarters of Immigration and Customs Enforcement (ICE). “Processed” is a better word than “marched” because the event had the feeling of a religious pilgrimage—of the feast day of a saint in a small town in Italy or South America. Many of those processing were no doubt thinking and talking about politics and policies, but they all walked behind an elevated icon of the Virgin Mary—a large wooden frame containing the Madonna and Child, with metal fencing for a backdrop, trimmed with ribbons bearing written prayers and petitions. It was the same Protectress of the Oppressed I had seen before.

Two coalitions came together to organize the event. The recently formed D.C. Catholic Coalition, which had already organized a protest in the nation’s capital earlier this summer, focuses on child detention. The older coalition of New Jersey–based activist groups, on the other hand, has been protesting the detention of immigrants and asylum seekers for more than two decades. This coalition includes Pax Christi, the Jesuit Refugee Service, the Haiti Solidarity Network, and First Friends (which focuses on the detention of immigrants and asylum seekers). Cardinal Joseph Tobin, the archbishop of Newark, also played an important role. He marched with the protestors and made the final speech of the day, in front of the federal building. Most media reports of the event led with an account of his speech: he made the protest more visible to the average non-activist Catholic.

They wanted us to look into the faces of those fleeing violence, far from home, stuck in a labyrinthine and seemingly endless legal process.
sharetweet

Among those processing, around fifty people were “open to arrest,” and a smaller group was prepared to engage in civil disobedience. On the way to the federal building, I spoke with two members of the DC Catholic Coalition who planned, by the end of the protest, to lie down and block traffic on the street in front of the federal building, not resisting arrest when it came. They were white-haired veterans of political activism and had engaged in a similar gesture in Washington D.C. this past July. One was wearing a shirt that said, “Veterans for Peace.” The other told me she was an ordained priest of over ten years, a member of an organization of women priests not in communion with the diocese. “You guys seem to be old hands at this sort of thing,” I said. Their response began with a look that said, “Yes, obviously.”

But it wasn’t only older activists who were there: I saw younger faces, non-Boomer sisters in traditional habits, and teachers and other professionals in their thirties. The protest culminated without great incident in front of the federal building. A woman named Angela Lopez, who was bringing her daughter to a deportation hearing that day, gave an impromptu speech, asking the crowd for compassion, expressing her love of the United States. Archbishop Tobin spoke, prayed, and started a chant: “Stop the inhumanity!” The police standing guard asked the crowd not to block the entrance to the federal building. Six activists lay down on Broad Street and were eventually taken into custody.

I asked Kathy O’Leary, a member of Pax Christi and one of the organizers of the event, what she hoped the protest would achieve. “I want people to fill their hearts with stories instead of filling their hearts with data,” she said. Hence the posters bearing the photographs and names of detained children: the organizers wanted us to simply look into the faces of those who were fleeing violence, far from home, stuck in a labyrinthine and seemingly endless legal process, living under conditions that most Americans would not tolerate for themselves or their loved ones. Also, to contemplate their fate. “Are those children in the photographs currently in detention?” I asked O’Leary.

“The ones on the signs? They are of children who have died.”