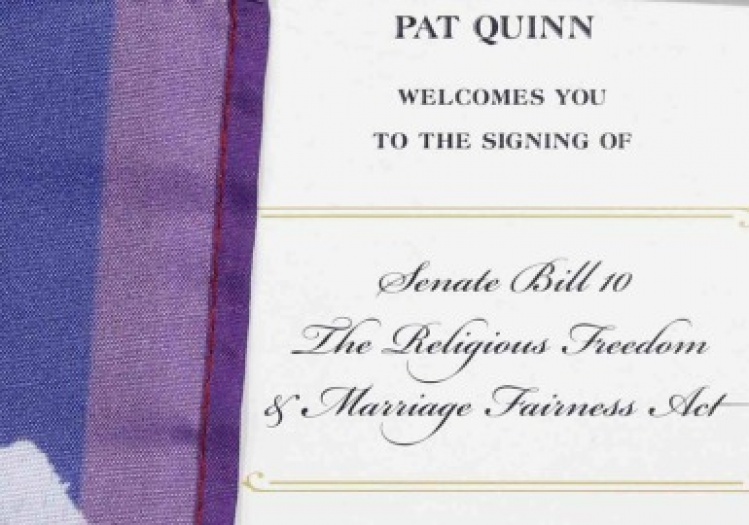 We invited Ross Douthat, a conservative columnist at the New York Times, and Jamie L. Manson of the National Catholic Reporter to comment on Bottum’s argument. Manson’s piece went live Thursday and appears here; Douthat’s, which we posted Wednesday, appears here. Today, we feature Bottum’s response to them.

All our discussions of marriage in this country are strange, contorted expeditions—stretching over unmarked chasms, swerving around invisible barriers. We are voyagers adrift in a landscape of unlikeliness, and most of the peculiarity derives, I think, from a very simple fact: We wish to hide from ourselves the truth that contemporary Western culture has generally removed sex from the category of human actions that it believes can be judged in moral terms.

The Pill is often named as the great enabler of these changes in our cultural understanding, combined with such things as publically acceptable divorce and the antibiotics that brought venereal disease under control in the era before AIDS. But whatever their origin, our altered attitudes about sex would have made for an odd social landscape all by themselves—except, of course, that those attitudes never existed all by themselves. The final piece of strangeness, the last skew, is the peculiar fact that the demoralizing of sex came to us in the twentieth century as itself a moral thing. Whether formulated in terms of physical health or mental stability or social improvement, our attitude to sex reflects an inherited Edwardianism that finds its moral gratifications in rejecting Victorian mores: a stern judgmentalism about anything that resists nonjudgmentalism in sex.

You can hear it still in the admiring tone with which the word “transgressive” is used in the sex-drenched essays of modern academia. You hear it still, for that matter, in the way Jamie L. Manson deploys the word “challenging” in her reply to my essay, even while she describes the social outcomes she wants as so ordinary and unremarkable that the church ought to embrace them immediately. There is, in truth, a key cultural feeling of morality left in sex, but it’s the self-righteous joy of knowing that one opposes the evil prudes who think sex still has some morality left in it.

This is the landscape in which same-sex marriage made its dramatic appearance over an incredibly short period of time, a volcano cone suddenly rising and erupting in American society. I’ve just never been sure where exactly on the map it lies. Sometimes same-sex marriage has been described as a natural outcome of the removal of sex from the realm of morality. Sometimes it has been praised as a wonderful transgressive rebellion, good because it helped undo bad Western norms. Sometimes it has been described as a useful expansion of an old idea, helping preserve the marriage culture. Occasionally it has been promoted as a way of returning ethics to sexual relations, drawing gays and lesbians away from support for the demoralization of sex, to which, it is claimed, they were forced by the repressions of a premodern morality that lasted into the modern world.

In other words, the arrival of legal recognition of same-sex marriage was over-determined in America. And that’s why I think it makes a terrible object for the Catholic Church to pick as the synechdoche for all the objectionable things in contemporary society. Our problem as Catholics isn’t that same-sex marriage somehow uniquely represents Western society’s recent turns; our problem is those turns themselves: the disenchantment of the world, the systematic effort to hunt down and destroy the last vestiges of old metaphysical and spiritual meanings in the world.

As I argue in my latest book, An Anxious Age, the eradication of the old supernatural meanings ended up creating new supernatural meanings in America—and often less benign ones, as strange angels and demons drifted out of the decaying mainline Protestant churches to find their home in social politics. Such a situation is both unhealthy and dangerous. When we suppose our ordinary political opponents are not simply mistaken but actually evil, we live in a world overtaken by misplaced spirituality. A world in which politics has become soteriology.

This is the modern turn that public Catholicism in America needs to oppose. In the current American legal and social climate, there is simply no available solution to the puzzle of human sexual desire. The cathedral of meaningful marriage has collapsed, opening space for advocates of same-sex unions to claim that they are building a small but stable chapel in the rubble. Are they, in fact? I don’t know, and neither does anyone else. But I rather imagine they should be left alone to try, just as I demand that the high post-Protestant moralists stop using same-sex marriage as a sledgehammer with which to knock down every Catholic institution in America.

Ross Douthat reads my essay as a retreat from politics—and a self-contradictory one, since the essay also counsels against fleeing modern corruptions aboard small lifeboats of the saved. But the contradiction exists only if one takes a narrow view of politics as somehow existing apart from culture. Among political commentators, Douthat has been one of the most appreciative of culture, but he’s still caught by the modern trap in which everything seems politicized, and our cultural understandings, our spiritualized experiences of the world, become political battles. The Catholic work that needs to be done is the work that rebuilds Catholic culture, restoring what in An Anxious Age I call “a room with a view,” a spiritually and theologically secure place from which to look out on the world and offer both criticism and praise. The examples of good Catholic work I gave in “The Things We Share” are dismissed by Douthat as Mrs. Jellyby inanities: pretending to care for distant souls as an excuse for the selfish ignoring of souls nearby. But I named those things as possible ways of working toward goals not merely in Asia and the Global South (where, in fact, the future of Christianity lies) but also here at home: extra-political devices by which we try to create and assert Catholic culture among ourselves.

Jamie L. Manson wants to bring the current social regime into the church, and Ross Douthat wants to bring the church into the current social regime. I have enormous sympathy for the motives behind both these views. But they each begin with the late modern premise that the supernatural enchantment of reality is primarily a political thing. For that matter, they both begin with the notion that homosexuality—and the issue of same-sex marriage in particular—ought to be near the center of Catholicism’s public moral concern. That’s bad politics and bad metaphysics, in just about equal measure. Douthat admits that Catholics shouldn’t necessarily begin conversations with same-sex marriage. Amen. But allow me to take a long step beyond that: I think we actually do need to start conversations with a mention of the Blessed Virgin. You want to re-moralize sex? Re-imbue it with beauty and meaning? Then use Catholic culture as your starting point. Say the rosary, and change the world.

With its strawberries and Prosecco in the park, Manson’s reply has the class markers and ecclesial feeling of writing by an admirably sensitive Episcopalian of liberal bent. With its rueful here-I-stand politics, Douthat’s reply reads like the work of a thoughtful Evangelical culture warrior of conservative impulses. That both authors are Catholics I have no doubt, but hand in hand they walk the unlikely landscape of American post-Protestantism—formed by its struggles, determined by its debates: inseparable companions on a trip I urge them not to take.

Joseph Bottum is an Amazon.com-bestselling author whose latest book is An Anxious Age: The Post-Protestant Ethic and the Spirit of America (Image/Random House). The former literary editor of the Weekly Standard and chief editor of First Things, he lives in the Black Hills of South Dakota.