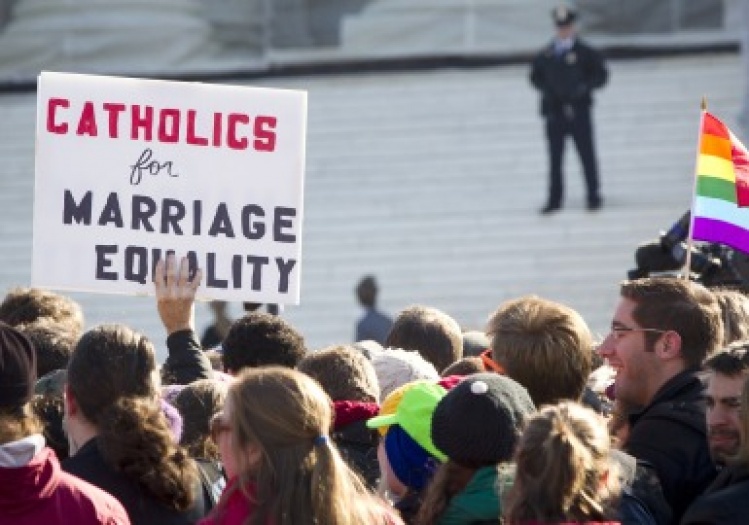 We invited Ross Douthat, a conservative columnist at the New York Times, and Jamie Manson of the National Catholic Reporter to comment on Bottum’s argument. Manson’s piece appears below; Douthat’s piece, which we posted Wednesday, appears here, and Joseph Bottum’s response to both is here.

On the first day same-sex marriage became legal in New York State, in July 2011, I headed to Washington Square Park to witness the marriage of two women. The couple, who had been together for nineteen years, first exchanged vows and rings in a commitment ceremony seventeen years ago. The vows they repeated on that Sunday afternoon gave them, at last, equal protection under the law.

After the ceremony, we celebrated with pizza, strawberries, and Prosecco (smuggled into the park in coolers). The twenty people in attendance, whose ages ranged from twenty-one to well over seventy, all shared two things in common with the couple. We were all either gay or lesbian, and we all remained deeply committed to our Catholic faith. The married couple—both former nuns—first met at Mass two decades ago. And it was directly to Mass that they, and most of the wedding party, headed after the festivities.

Seeing these two women still so completely in love after two decades together, few could deny how naturally they complemented one another on every level. But for all of the special and spiritual aspects of the afternoon, I was struck most by how ordinary it was. I wished that those who regard same-sex marriage with contempt, fear, or concern could have observed that celebration. What they would have witnessed would probably have borne a striking resemblance to other weddings they’ve attended: friends weeping over the couple’s vows, taking tons of pictures, and enjoying a great party.

I would take that further. As someone preparing to enter a same-sex marriage with my partner of five years, I think American Catholics can and should accept recognition of same-sex marriage because they are Catholics. The church should revise its attitude toward same-sex relationships not simply because the culture is moving in that direction—which by itself, as Bottum says, is no reason to alter any moral teaching—but because it has become clear that that what the church teaches about homosexuality is not true.

Bottum writes that “the thin notions of natural law deployed against same-sex marriage in recent times are unpersuasive, and, what’s more, they deserve to be unpersuasive—for their thinness reflects their lack of rich truth about the spiritual meanings present in this created world.” I agree, though I suspect the truth I have in mind is not what Bottum is gesturing toward. Anyone with an experience of loving same-sex relationships will find unpersuasive the Catholic teaching that such relationships are sinful by their very nature because only sex acts that have the potential to create new life are licit.

Such a strict interpretation of natural law reduces human beings to their biological functions, and fails to appreciate persons in their totality as the emotional, spiritual, and physical beings that God created us to be. Most of us have realized that the potential to procreate does not by itself lead to the flourishing of married couples. Many childless couples have demonstrated that their relationships can also be fruitful and life-giving. So why must same-sex couples be regarded as incapable of marriage?

In her book Just Love: A Framework for Christian Sexual Ethics, Margaret Farley proposes that, in addition to meeting the norms of equality, mutuality, and commitment, a just and loving sexual relationship should also demonstrate fruitfulness—which need not be limited to conceiving and raising children. Some married couples are called to be parents, Farley explains, but all married couples are called to bring the life of God into the world by caring for one another, nourishing other relationships, working to mend our broken world, and being a sign of faithfulness to their community.

Rather than making procreation and genital complementarity the fundamental criteria for marriage, we should instead be asking whether spouses are a visible, tangible sign of God’s loving presence in our midst. Does their relationship help them flourish as individuals and as a couple? Does their commitment inspire others to deepen their fidelity and devotion? Are they a sign of the power of forgiveness, mercy, and unconditional love? Are the sacrifices that they make for one another an incarnation of the selfless love to which Jesus calls us?

Many of us know same-sex couples that fit this description, and, sadly, we know married heterosexual couples that do not. Reducing these couples to the functions of their anatomies simply does not do justice to the Catholic understanding of human persons. Recognizing the potential of a gay or lesbian couple to fulfill the requirements of sacramental marriage would be one way to embrace “the spiritual meanings present in this created world,” as Bottum puts it. The growing acceptance of same-sex relationships and the push for same-sex marriage is not, I would argue, a sign that reality needs re-enchanting, but a sign that our culture may be more receptive to a challenging spiritual vision of married love and commitment than Bottum suspects.

Bottum seems to want to table the question of whether gay and lesbian relationships are sinful until some future date when the church and the culture are better equipped to discuss it. “After the long hard work of restoring cultural sensitivity to the metaphysical meanings reflected in all of reality,” he says, “Catholics will have enough experience to decide what measure of the deep spirituality of nuptials, almost absent in present culture, can reside in same-sex unions.” For people like myself, and the friends who joined me that Sunday in Washington Square Park, that suggestion is unsatisfactory. By all means, we should work to make our culture more sensitive to the deep spirituality of nuptials. But same-sex couples shouldn’t have to wait for the success of that project, whatever that might look like, before we can participate.

It may take centuries before the Catholic hierarchy recognizes that marriages like the one I witnessed in the park, or the one I hope to enter, are holy unions with the potential to bring the life of God more fully into our world. But just as most of our culture has already concluded that same-sex relationships are equally deserving of protection under the law, for many Catholics the question of whether gays and lesbians are capable of living the vocation of marriage is already settled.

Jamie L. Manson is a columnist for the National Catholic Reporter. She is also NCR’s book-review editor.