Is There a Future for Lay Catholic Theologians?
By Massimo Faggioli
Theology
Clericalism
Laity
Vatican II 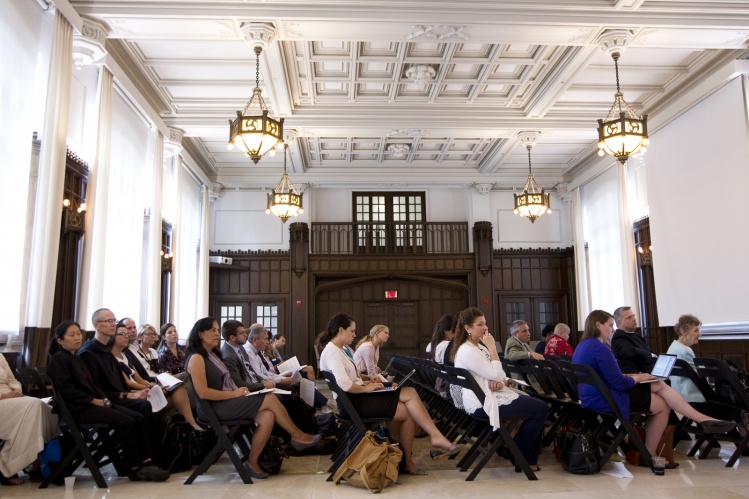 In a lecture delivered in February 2005, Sarah Coakley sounded the alarm about the condition of what she called the “church-scholar.” She warned that “the idea of theological scholarship as a specific religious vocation is increasingly under fire in today’s North American climate.” Coakley identified three disjunctions at the roots of this crisis: the disjunction between theology and religious studies in the secular academy; between conservatives and liberals in the churches and seminaries; and between public democratic responsibility and religious commitment in society at large. All three of these disjunctions have become yet more disjunct since 2005, and with ever greater consequences: what Coakley called the “mutual demonizations” in the Catholic Church; “the pitting of religious constituencies against secularism in the sphere of democracy, threatening the very fabric and coherence of democracy itself”; “the allure of practice” as a way of resisting relativism, with sectarianism as its theological consequence.

In her lecture Coakley was dealing mostly with the academic side of the problem. In the past few years there have been disturbing signs that the link between the intellectual vocation of the theologian and the religious vocation of the Christian has become quite weak. In American higher education between 2011 and 2017, the majors that have lost the highest number of students are—in this order—history, religion, area studies, humanities, languages other than English, and philosophy. This has obvious consequences for the future relevance, and indeed the mere survival, of these disciplines. One can no longer take for granted that any of these subjects will continue to shape the education of all college students in the United States. Nor is Europe exempt from this trend: the University of Bologna, one of the oldest in the world, no longer has a self-standing philosophy department. Instead it has “philosophy and communication.” Theology is subject to the same forces threatening all of the humanities. As theology, along with religious studies, becomes more marginalized at American universities, fewer and fewer Catholics will have the opportunity to study these subjects, and most of those who do will be people preparing for either ordination or lay pastoral ministry. This reduction of theology to technical training for pastoral work is something quite different from the “pastorality of doctrine” that Vatican II had in mind.

These changes are also at odds with the growing awareness that the church needs to do something about clericalism. In fact, the growing irrelevance of the study of theology for its own sake, and not simply as technical training for pastoral workers, could well lead to a new clericalization of the theological profession. This would be the end of the short history of theology done by lay people. At the very least, it would likely put an end to the hope that giving the laity access to the theological profession would change and improve Catholic theology itself.

Theologians must remember that the church will always have a leadership of one kind or another. It is their job to help influence the leadership, in service to the church.
sharetweet

There is no denying that, thanks largely to Vatican II, a substantial change has already occurred, especially in countries where the church and higher education have worked together to give lay Catholics—and in particular women—access to teaching and research positions in Catholic theology. But we might have reached the peak of that trend, which is only about fifty years old. Theology could return to what it was for most of its modern history: work done in church-controlled theological schools by ordained members of the church—that is, male and celibate Catholics, most of them in religious orders. Theology was largely of the clergy, by the clergy, and for the clergy. If we return to this model, it will not be the result of clericalism alone, but also of the titanic market forces surrounding higher education here and abroad. Only extremely motivated students would want to go into debt to study something like theology. It is hard to pay off student loans on a theologian’s salary, and even harder, perhaps, to find a job as a theologian.

But it isn’t only the technocratic turn in higher education that’s putting stress on academic theology; it’s also the Catholic Church’s unwillingness to invest in lay theologians—at least in Europe and North America. It is, for example, very hard to feed a family on the salary of a professor in the pontifical university system in Rome. This makes it almost a necessity for such universities to hire members of the clergy or religious, and in the long run this will have an effect on the number of lay men and women interested in theology.

The change in the student body of the theological disciplines—more and more clerics and fewer lay people—could produce important effects on the theology itself. Without pressure from lay theologians, Catholic theology would likely become more clerical in its outlook, and less “democratic.” The quality of theological arguments may once again matter less than the hierarchical authority of those who make them. A re-clericalization could have a particularly damaging effect on the field in which I work—ecclesiology.

These changes are taking place in the middle of a crisis of the theology of the laity, a theology that came into its own in the 1950s and was officially recognized by the Second Vatican Council. That’s when the Catholic Church first insisted on the equality between the laity and the ordained. Today, however, the laity are still in effect equal but separate. Until canon law changes, we are still in the church of the duo genera Christianorum. Whatever the merit of Francis’s emphasis on the “theology of the people,” it is not changing the conditions that separate the laity from clergy, such as unequal access to a theological education, and to the avenues that a degree in theology opens in the Catholic Church.

If one wants to re-clericalize the church, one starts by re-clericalizing theology. I suspect this process is already underway. In many, if not most, Catholic colleges and universities, undergraduate requirements in theology have been drastically reduced (most recently at the University of St. Thomas in the Twin Cities). One often hears that the United States now has the best-educated laity in the Catholic Church’s history. This may be true of the Catholic laity’s education in other disciplines—the ones they major in—but it is not true about their education in the faith. If administrators and faculty at Catholic universities choose to gut the core curriculum, requiring fewer courses in theology, philosophy, history, English, and foreign languages, then they lose the right to complain about secularization, anti-intellectualism, or historical amnesia. Trumpism is what you should expect to get in a country that has neglected the humanities.

Catholic theologians—and especially lay Catholic theologians—should do whatever they can to help steer us away from the oxymoron of a post-ecclesial theology; they must situate their intellectual endeavor squarely within the church. Since John Paul II’s Ex corde ecclesiae, if not before, academic Catholic theology has been understandably anxious about ecclesiastical control. But theologians must remember that the church will always have a leadership of one kind or another. It is their job to help influence the leadership, in service to the church. At a time when so many forces are arrayed to marginalize academic theology, within the church as well as within higher education, this moment could well be the beginning of the end of the short life of lay Catholic theology. If this happens, it will be the responsibility not only of lay theologians, but also of administrators and faculty—Catholic and non-Catholic, theologians and non-theologians—working at Catholic institutions of learning.