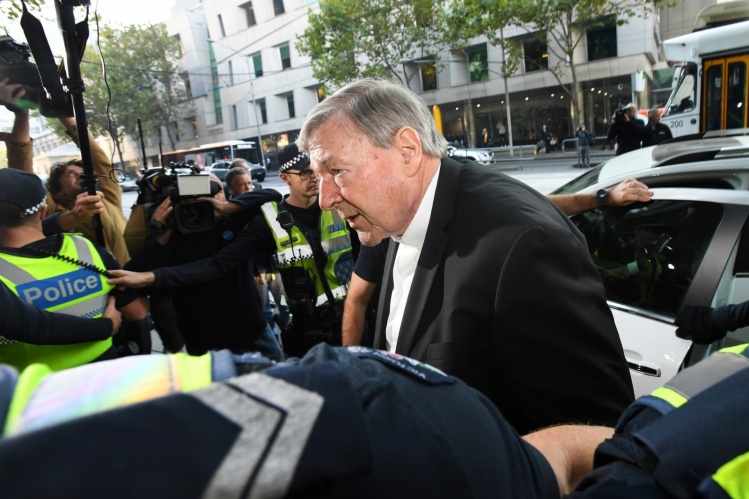 The relationship between papal power in the church and the political power of the state has been defined for centuries by diplomacy, foreign policy, revolutions, and parliaments. Now, because of the sexual-abuse crisis, it is being redefined by the criminal-justice system of the secular state.

The convictions of Cardinal George Pell by an Australian tribunal for crimes of sexual abuse against minors, and of Cardinal Philippe Barbarin by a French tribunal for failing to report an abusive priest, together mark a new chapter in the relations between church and state. Imagine there were to be a conclave in the near future. It could be the first conclave in modern history where at least one of the voting members of the College of Cardinals was unable to vote because he was behind bars (Barbarin remains free during the appeal process). The nearest precedent is the case of Cardinal József Mindszenty of Hungary, which was quite different: Mindszenty was unable to attend the conclaves of 1958 and 1963 because he had taken refuge at the U.S. Embassy in Budapest. Mindszenty had been arrested by the Hungarian Communist regime for political reasons, not common crimes. Other examples come to mind: Napoleon taking Pope Pius VII prisoner between 1809 and 1814; the archbishop of Cologne, Clemens August von Droste-Vischering, arrested by the Prussian government in 1837; the many bishops who spent years or decades in the prisons of Communist regimes, for example in Ukraine, China, and Vietnam. All these cases were obviously very different from those of Cardinals Pell and Barbarin, whatever one thinks of the verdicts against them.

With the moral standing of the Vatican deeply damaged, we may see the reopening of what was once called the “Roman question.”
sharetweet

These two cases have great symbolic significance in a church where symbols matter. The prospect of a cardinal missing a conclave because he’s been incarcerated for sexual abuse, or for covering up such abuse, is a fitting symbol of the way a whole system for protection of the institutional Catholic Church—a system built on status, immunities, and privileges—is falling away before our very eyes. What gives this symbol extra force is the prominence of both Pell and Barbarin. Pell is a high-profile representative of a particular Catholic culture in the English-speaking world that wants to rebuild a more assertive church that can stand up to secularism. Barbarin is archbishop of Lyon, home of the Jesuit college of Fourvière, one of the symbols of modern French Catholicism. One of the most important Jesuit theologians ever, Henri de Lubac, studied and taught at Fourvière.

These two legal cases (and the others that are likely to come) raise an important issue for the church concerning its ad extra relations. The clash between the Catholic Church and the revolutions of the late eighteenth and mid-nineteenth centuries reached a provisional settlement that lasted from around the time of Vatican I until quite recently. The shape of this settlement was determined by a long series of political-theological events. The first of these was the declaration of papal primacy at the Vatican Council in 1870, along with the rise of a “liberal ultramontanism” that accepted the distinction between the theological and political spheres, respected the sovereignty of the state, and aimed at the creation of an independent spiritual power in the papacy with its own territorial sovereignty. This was followed by the solution of the “Roman question” with the creation of the Vatican City State in 1929; the age of concordats in the twentieth century; the acceptance of democracy and the constitutional state at Vatican II; and the embrace by the post–Vatican II church of the fight against dictatorships in favor of human rights and freedom. The heart of this Vatican I–Vatican II dispensation was the assumption that in the future, there would be a tight, friendly, and collaborative relationship between church and state, each of which would respect the other’s sovereignty.

The latest developments of the Catholic abuse crisis, both at the national and global levels, put this settlement in question. Now that the abuse crisis has reached the Vatican, with the cases of McCarrick, Pell, and Barbarin, the long-unquestioned juridical status of the Holy See and of the pope as sovereign of Vatican City State may again be challenged. With the moral standing of the Vatican deeply damaged, we may see the reopening of what was once called the “Roman question.”

The decision of Benedict XVI to continue living in the Vatican after his resignation should also be interpreted in light of the mounting wave of scandals involving the central government of the Catholic Church. Nor is Benedict alone: Cardinals Sodano and Bertone, who were secretaries of state under John Paul II and Benedict, have also chosen to live in the Vatican, and have remained remarkably silent in the past few months. The shield provided by the international status of the Holy See could change one day, however unimaginable that may seem to some. After all, the Vatican’s current juridical status is of fairly recent vintage. In his book Vatican I: The Council and the Making of the Ultramontane Church, John W. O’Malley reminds us that “the popes of the nineteenth century, like their predecessor for centuries, considered the Papal state, and most especially the city of Rome, a sacred trust, a holy legacy that could never surrender. No pope was more convinced of this truth than Pius IX”. But after almost a thousand-year-long history, the Papal States came to a sudden end. The Catholic Church may be two thousand years old, but the Vatican City State is just ninety. There is no reason to assume it will exist just as it is in perpetuity.