After a Century of Beethoven

'A genuine release into the infinite'
By Ernest Brennecke Jr.
From the Archives
Music
Spirituality 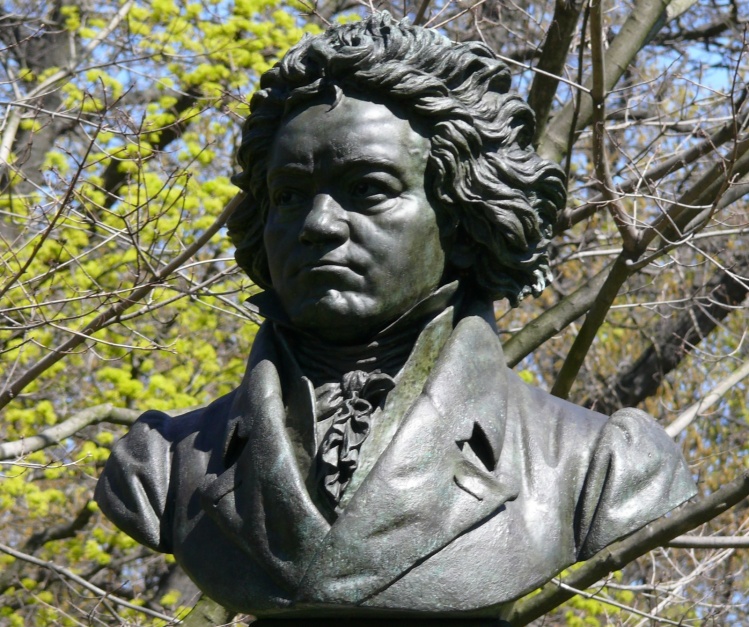 [This article first appeared in March 9, 1927 issue of Commonweal]

On the evening of March 26, 1827, a man, having received the last sacraments of the Church, lay dying in a house in the Schwartzspanierplatz, Vienna. A violent storm had arisen as night fell; hail and snow were driving violently against windows and roof. A bolt of lightning suddenly struck nearby, and a loud clap of thunder deafened the watchers by the bedside. The man thereupon opened his eyes, shook his clenched fist above his head, and in this attitude of defiance gave up the ghost.

Thus ended the mortal career of Beethoven, recognized and celebrated as the creative musician par excellence, after 100 years. Critics, musicians, and lay public now unite in honoring him -- for various reasons. Some of these reasons are ridiculous enough. In Beethoven, for instance, our genius-worshippers discover the possessor of an ocean of temperament. They recall that he threw eggs at his cook; that he was careless of his clothes and of the cleanliness of his person; that he tramped through the country roaring his tunes in a frightful voice, with his long black mane flung to the breezes; that his performances at the piano caused the tears of his auditors to stream unchecked down their cheeks, after which he laughed at them wildly and called them hogs and asses; that he hired rooms, and then refused to live in them; that he improvised the Moonlight Sonata for a blind girl; that he fell desperately and vainly in love with scullery-maids and countesses; that he outraged and insulted archdukes and princes; that he passed his last years in the (for him) unspeakable anguish of deafness, brought on by a syphilitic disorder; that even his death was in the highest degree spectacular.

Some of this is apocryphal, but much of it is, unfortunately, true, and all of it has supplied a vast fund of curious evidence for those who, forgetting the examples of Bach, Haydn, and Brahms, think of the ideal composer as one necessarily afflicted with a daemonic mama. Ambitious keyboard-ticklers also, often think that if they can only act with sufficient eccentricity, they will be able to transform themselves into Beethovens.

But on an occasion such as this centenary we might do well to rid our minds of the merely picturesque and theatrical, and disregard the accidents which made Beethoven appear as a practical joker, a contortionist and exhibitionist. We might more profitably listen to his music and grasp its meaning, if we can. And here again we must subduct and disregard a few more accidents. We must, for one thing, try to rid our minds of the dramatic associations it is prone to evoke. Listening to the opening crash of the Fifth Symphony, we must hear the sounds themselves, and refrain from calling up fantasies of the blows of fate or of the drunken porter at the gate. Even in the case of the Pastoral Symphony, which includes avowed imitations of nightingale-songs, murmurings of a brook, dancing peasants, lightning, thunder and rain, Beethoven was careful to signify that he meant, not portraiture, but rather a general and ideal expression of emotions.

Nor must these emotions be too definitely conceived. In so far as they are formulated so as to correspond with the concrete, they are irrelevant to the essential values of the music, and should be disentangled and cast into the rubbish-heap. If we can hear in Beethoven nothing but the rhythms of marching armies, the heart-beats of secular love, the muscular flexions accompanying spasms of hatred or joy, we waste our time in listening to it and in celebrating a century of its dominance of salons and concert-halls.

For it is as a mystic seer--or, perhaps, less offensively and more accurately expressed, as an intuitive discoverer -- of sound-forms which we can recognize (at once, or after much study) as realizations of absolute, eternal spiritual values: it is as the prophet or mediator-artist, that Beethoven should command our minds. Before he composed, the practice of music had been wavering between two functions, neither of them very creditable to the practitioners. On the one hand, it had been employed as an intensifier of situations, more or less dramatic, as in the Italian and Mozartian opera. On the other, it had been designed to break up and relieve blank stretches of silence, much as wallpaper is (sometimes) artistically designed to relieve the monotony of blank walls.

Beethoven rescued it from its latter function as a time-killer for noble but idle patrons. His compositions were popular, in the right sense of the word, because they provided stimulation and elevation even for such persons who were not merely bored, whose time, being valuable, did not have to be filled up, or destroyed, by the contemplation of meaningless patterns. He was also, in a more superficial sense, the liberator of the professional musician from the thraldom of serving a few wealthy masters (in which respect his achievement corresponds closely with that of Dr. Johnson in literature) by reason of his undisguised contempt for the patronage of the mighty.

The designs he created, then, had more than a negative value as mere relief from blankness. But he also avoided, for the most part, the opposite pitfall of a descent to dramatic imitation and the stage. In his best work, as Dannreuther has put it, he "speaks a language no one has spoken before, and treats of things no one has dreamed of before; yet it seems as though he were speaking of matters long familiar, in one's mother tongue; as though he touched upon emotions one had lived through in some former existence. The warmth and depth of his ethical sentiment is now felt the world over, and ere long it will be universally recognized that he has leavened and widened the sphere of men's emotions in a manner akin to that in which the conceptions of philosophers and poets have widened the sphere of man's intellectual activity."

Consider, now, his great Mass in D, his Missa Solemnis, which is justly ranked, together with the Ninth Symphony and the last quartets, as his greatest, most profound (and hence, in the minds of many, his most incomprehensible and "difficult") work. Dismiss as grotesquely irrelevant, whether true or not, Schindler's description of its birth-agonies: the Master in a deserted house, stamping, shouting, howling over the fugue on Et Vitam Venturi; his sudden appearance, wild, disheveled, faint with toil and twenty-four hours' fast. Give ear to the music itself (it was performed last November by the Society of the Friends of Music and the Philharmonic Orchestra in New York, and may soon be performed again). Does it not provide us with a genuine release into the infinite? Does it not tap the mysterious reservoir of the beautiful; does it not somehow make articulate those religious moments which mere words can only approximate symbolically?

"One is no longer in church," said Saint-Saëns in describing this experience, "one does not know where he is." Saint-Saëns’ idea was correct, but his expression, like that of most musicians, including the great Ludwig himself, was poor. One is decidedly and precisely "in church"; one forgets the physical nature of his surroundings and is immersed in an ecstatic contemplation of divine verities. Count Keyserling phrases it somewhat better: as the "opening of the consciousness to the influences which are awaiting liberation in the innermost depths of the soul, which, when liberated, connect the spirit directly with God."

Beethoven's great Mass does that, and in this respect it surpasses the Missa Papae Marcelli of Palestrina, Bach's Mass in B-minor, and Brahms's Requiem; for when listening to those works, magnificent as they are, we can still remember that we are in church, in an edifice of stone and glass. But Beethoven here demonstrated that he was a spirit to whom every tree did indeed say, "Holy, holy." The same, or analogous, realizations attend an understanding audition of the other works which crowned his career: the Piano Sonata in C (op. 111), the Quartet in B-flat (op. 130), the Choral Symphony.

What does it matter that he also produced a vast quantity of cheaper stuff; that he was an eccentric in his actions? Let us rather celebrate his soul as it expressed its moments of unity with itself and God, when it rose above his world of petty occurrences and confused emotions. These he overcame before his end: as he himself declared, "I will as far as possible defy my fate, though there must be moments when I shall be the most miserable of God's creatures."

Tags
From the Archives
Music
Spirituality