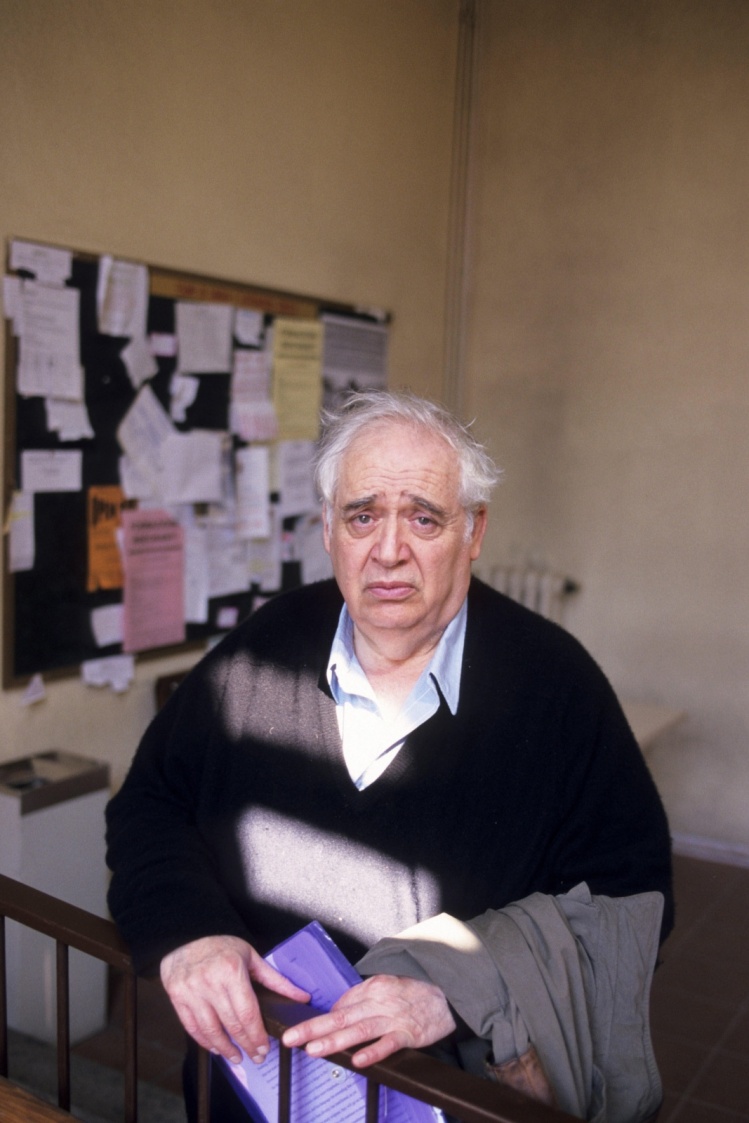 I’m almost certainly the only student in the history of the Ashland Public School System to dress up as Harold Bloom for Career Day. I was in fifth grade and my look was carefully curated: a big baggy sweater and a pair of khaki pants, intentionally tousled hair, with a copy of Bloom’s 1994 The Western Canon in hand. A more ridiculous image of my kid self is hard to imagine.

To be clear, I wasn’t really a Bloom fan at the tender age of eleven. My dad had bought The Western Canon, that rare book of literary criticism that became a national bestseller, and I’d excitedly, confusedly read it from start to finish. I didn’t understand much of what Bloom had to say. What was this “School of Resentment” that he so frequently railed against? Who were these “New Historicists” who were “attempting to reduce and scatter Shakespeare”? And what the hell did a sentence like this mean: “But the real me, the me myself, is not only a known realm but the faculty of knowing, something close to the Gnostic capacity to know even as one is known”?

Yet despite my inability to follow most of Bloom’s arguments, I knew that I wanted to know what he knew, to love all those writers (Dante and Chaucer, Dickinson and Pessoa) that he loved, to feel as passionately about poems and novels and plays as he did. The greatest future I could imagine was one in which I got to read all day long, and Harold Bloom—garrulous, brilliant, pompous, impossibly well-read Harold Bloom—was what I thought a professional reader looked like.

My relationship to Bloom’s work has changed over the years, as have my tastes. (If I had to dress up as a critic now, I’d probably choose Patricia Lockwood.) There’s much that I admire about Bloom: his leaping, associative mind, sensitive to how one poet’s words or soul might rhyme with another’s; his defense of the aesthetic as the primary criterion by which to judge art; above all, his sense that deep reading is “the proper use of one’s own solitude.” I’ve come to find other traits less admirable: some merely annoying (his tendency to repeat himself), some maddening (his sloppy argumentation; his frequently self-pitying stance that imagines the world is out to get him and readers like him). Still, I agree with William Giraldi’s assessment of Bloom’s achievement: “No other American critic since Emerson has done more than Harold Bloom to make literary comment as artful, as creative, as dynamic, as the literature it aims to assess.”

We’re continually being told to appreciate Bloom’s latest since this might be the final word from our era’s Samuel Johnson.
sharetweet

You’d need to be a Bloomian reader—that is to say, impressively committed and impossibly fast—to have kept up with his output since that Career Day: more than a dozen books, many edited anthologies, more than a few critical introductions. Now, we have his latest, Possessed by Memory: The Inward Light of Criticism. Checking in at over five hundred pages, it contains thoughts on Shakespeare (of course: after all, Bloom famously wrote a book entitled Shakespeare: The Invention of the Human), on Kabbalah, on Browning and Dickinson and Swinburne and Milton and the Psalmist and many, many others.

Bloom’s publishers promise that this is “arguably his most personal and lasting book,” a synthesizing tome that recontextualizes his sixty years as a critic. Similar claims have been made for 2015’s The Daemon Knows, and 2011’s The Anatomy of Influence, and 2004’s Where Shall Wisdom Be Found. We’re continually being told to appreciate Bloom’s latest since this might be the final word from our era’s Samuel Johnson. Jump to next year, when another five-hundred-page book rolls off the presses.

But Possessed by Memory really is a kind of valediction. In the first sentence of his first chapter, Bloom writes, “As I near the end of my eighties, I am aware of being in the elegy season.” This book dwells in the elegy season from its first to its last page, and it concerns itself throughout with ends: the end of friendships (Bloom mentions dozens of poets and critics whom he has loved and lost) and the end of Bloom’s own life. Many of the book’s chapters are short, more brief reflection than sustained argument, and hardly a chapter goes by without an intimation of Bloom’s own mortality: “I lose old friends every month or so now. Consolation is difficult to find, but elegiac poetry helps.”

The style of Possessed by Memory is recognizably late Bloom. There are sharp close readings (in “Possessions,” Hart Crane “builds his poem on substantives and verbal forms of counting”) interspersed with passages that can verge on poetry mad-libs: “No one would want to chant the Passion of Wallace Stevens or William Carlos Williams. Yet it is possible to speak of the Passion of T. S. Eliot. Again above all others, we can affirm the Passion of Hart Crane.” As with most things Bloom, this obsessive finding of poetic affiliation can be exhausting. But it can also be illuminating, as when he writes of the American poet Amy Clampitt that she “loved Gerard Manley Hopkins, himself a superb amalgam of Keats and Walt Whitman.” Such a sentence helps us understand Clampitt anew, hearing Hopkins’s music in a line like “the scree-slope of what at high tide,” and it begins to sketch an idiosyncratic poetic family tree: from Keats to Whitman to Hopkins to Clampitt. Bloom never sees writers in isolation but always in constellation, and these constellations are often dazzling.

Say what you will about Harold Bloom. He has loved literature deeply—and that love is, even in the face of death, a life-giving force.
sharetweet

Bloom has never been afraid to write himself into his criticism. But in this book the personal is more personal. Bloom continually reminds us and himself of his failing body: the falls he’s experienced and the recoveries they’ve demanded; the CT scans and fainting fits and restless nights. “Terrible sleeper as I am,” he writes, “I lie awake and chant to myself the concluding eight lines of Shelley’s ode.”

Throughout his career, Bloom has imagined literature as a form of agon—which is to say, as a deeply felt, sometimes loving, sometimes bitter conversation conducted across time and space. Possessed by Memory is perhaps most moving as a history of the conversations that Bloom has had about literature: conversations with poets like Richard Wilbur and Peter Cole, with critics like Helen Vendler and Geoffrey Hartman. In one excellent chapter, Bloom describes what he calls the American Sublime: the “longing for an unfallen American Adam and Eve,” the poetic and religious “hope of moving beyond limits” found in Emerson, Melville, and others. Bloom addresses this literary history through personal history: his friendship with the late scholar Angus Fletcher. “In the end,” Bloom writes, “the loving agon between Angus and me turned on the nature of the American sublime.” Fletcher, despite his interest in the visionary impulse of Whitman, “urged caution lest all Enlightened measure and balance break.” Bloom, by contrast, saw the best American writing “break[ing] measure and balance, in order to restore the image of the fully human.”

The chastened sublime versus the unbounded sublime: it’s a fascinating critical argument, and Bloom enfolds it within a moving account of his own relationship with Fletcher. Bloom locates their disagreement in biography and sensibility: “Only now, after Angus’s death, have I begun to understand a crucial difference between us. I have never been at home in the natural world. Angus, who spent his childhood and youth sailing around Long Island, was always alert to environmental splendors and the possibility we would lose them.” Bloom suggests that this sense of imminent loss led to Fletcher’s valuing of order and balance, his privileging of “the great poems of natural limits.” Bloom, feeling no such tie to the natural world, loves best those poems that “at their strongest verge on transcendence.” Here, in four pages, we get a sharp reading of the history of American aesthetics, a suggestive argument about the relationship between biography and criticism, and a condensed history of a friendship that is beautiful on its own terms: “I cannot accept that [Angus] is gone. When I write, read, and teach, he is with me.”

“This book,” Bloom writes in his introduction, “is reverie and not argument.” (One could say the same of many of Bloom’s books, but never mind.) Yet that statement about Fletcher—that when Bloom writes and reads and teaches his friend is with him—does present an argument of sorts, an argument about the ability of poems and friends and memories to possess us, to live on and through and with us. “When you have a poem by heart,” Bloom writes, “you possess it more truly and more strangely than you do your own dwelling place, because the poem possesses you.” The reader makes a home for the poem; then, she finds herself at home in the poem.

Early in Possessed by Memory, Bloom describes the intensity of his childhood reading: “When I was very young, I read poems incessantly because I was lonely and somehow must have believed they could become people for me.” Bloom claims that this “vagary could not survive maturation.” His career suggests otherwise. “Out of the Cradle Endlessly Rocking,” “Ode to a Nightingale”: these poems have taken on life for Bloom, and he’s lived and talked with them for years. Say what you will about Harold Bloom. He has loved literature deeply—and that love is, even in the face of death, a life-giving force.

Bookmarks | The Moment of the Short Story?