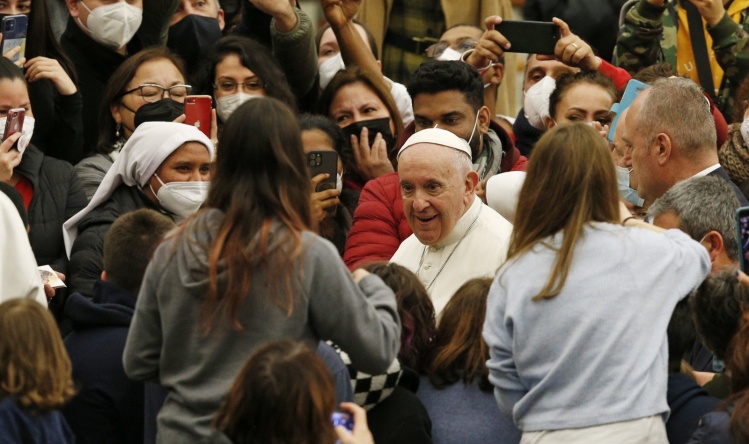 The term “culture of encounter” is used seven times in the English translation of Pope Francis’s 2020 encyclical Fratelli tutti—and the word “encounter” and its cognates appear another forty times. Eighteen months after the encyclical’s publication, however, “culture of encounter” is still one of the more elusive concepts of Francis’s pontificate: less familiar than “mercy” and “mercy-ing,” less vivid than the image of the Church as a “field hospital,” less practical-seeming than “care for our common home.”

But a conference held in Rome in late May set out to change that, and the three dozen of us participants were left with a robust sense of the meaning of “culture of encounter”—as well as the sense that we ourselves had been able to instantiate a culture of encounter through our three days of informal meetings, panel discussions, meals, and conversations.

The conference was organized by Georgetown’s Berkley Center for Religion, Peace, and World Affairs (where I am a senior fellow) and La Civiltà Cattolica, the Jesuit journal; it was held at the Villa Malta, where the journal is based, and hosted by its editor, Antonio Spadaro, SJ, who made opening remarks. Three Vatican dicasteries served as co-sponsors: the Pontifical Council for Culture, the Pontifical Council for Interreligious Dialogue, and the Dicastery for Promoting Integral Human Development. Georgetown’s president, John J. DeGioia, welcomed conference participants with a reception at the Villa Malta.

The Rome conference extended efforts of intellectual and cultural conversation that have taken place since last year among several dozen scholars, clergy, faith leaders, and activists from six continents—Zoom meetings, videos, blog posts, and the like. And it featured keynote addresses by Archbishop Paul Gallagher, the Holy See’s Under-Secretary for Relations with States, and Arturo Sosa, SJ, superior general of the Society of Jesus. The whole undertaking has been funded with a grant from the GHR Foundation, whose CEO and chair, Amy R. Goldman, will receive Commonweal’s Catholic in the Public Square award in October.

So what is the “culture of encounter”? Pope Francis, quoting Fratelli tutti in an address to the Association of Saints Peter and Paul in January, put it this way:

There is always movement in an encounter. If we all stand still, we will never meet. “Life, for all its confrontations, is the art of encounter” (Fratelli tutti, 215). That is what life is: the art of encounter. Encounter is, as it were, the oxygen of life. And this is why we need a culture of encounter, because “we, the people, should be passionate about meeting others, seeking points of contact, building bridges, planning a project that includes everyone” (216).

“Life, for all its confrontations, is the art of encounter.”
sharetweet

Earlier this year, my Georgetown colleague Thomas Banchoff, a vice president for global engagement and professor of government who also serves as director of the Berkley Center, distributed a paper to the group, setting out four crucial aspects of a culture of encounter: humility, generosity, realism, and patience. He traced the origins of the concept to Jorge Mario Bergoglio’s training and experience as a Jesuit in Argentina. And he touched on its significance for the Church and the world: “as a key to understanding the ideas and actions of Pope Francis; for a Church that is internally polarized and faced with a credibility crisis; and for the global agenda in a world that is increasingly divided.”

In Rome, DeGioia spoke of encounter as vital for any transition from a “bipolar” to a “multipolar” global order. “We have had many recent successes in dialogue, especially interreligious dialogue, but the consequences of our failure to encounter one another are global, and as we’ve seen in these last few years, quite catastrophic,” he said in an interview with L’Osservatore Romano, the Vatican newspaper. “So it requires new skills in discourse, even a new vocabulary. Encounter is about recognizing the responsibilities we have to one another and seeing things from the other’s perspective.”

The “culture of encounter” has deep roots in the approach of the Holy See in the postwar period. Pope John XXIII called the Second Vatican Council as an effort for the Church to encounter the modern world. Pope Paul VI, breaking with precedent, left Rome to travel to New York and address the United Nations. Pope John Paul II took more than a hundred apostolic journeys, at once making the act of encounter with others central to the papal office and having countless face-to-face encounters with heads of state, political leaders, and ordinary people on their home ground. Pope Benedict XVI, whose 1968 work Introduction to Christianity is framed around the encounter of believer and unbeliever, established the Courtyard of the Gentiles as a formal means for the Church to engage with unbelievers.

Pope Francis has made “the art of encounter” central to his pontificate. “The practice of encounter,” Banchoff observes, “can be seen in the human scale of many of his dealings—through his one-on-one meetings with others, whether a head of state, a survivor of clerical sexual abuse, or a person with leprosy; in the letters he has written to people of all kinds; and in the simplicity of his speech and way of life.”

It was Francis’s instinct for encounter that endeared him to so many people so swiftly after his election in 2013; it was his habit of encounter that made a man who was often taken to be gruff and unassuming during his time as cardinal archbishop of Buenos Aires such a hit with the world media as pope. All at once, press and public detected that his face-to-face dealings (done with cameras watching) were more than photo-ops; they were encounters on a human scale—a Gospel scale, some said. For moments at a time they showed the pope as one of us, in the middle of the road of his life.

The approach has seemed such a natural fit for Francis that it is easy to overlook how fully it followed the approach of his predecessors. John Paul’s embraces with Lech Wałęsa and Mother Teresa, his visit to the grand synagogue in Rome, and especially his invitation to several dozen world religious leaders to come to Assisi in 1986 and pray together: those efforts were a kind of counterpoint to the vast outdoor Masses he pioneered (which did, after all, give many millions of people the chance to encounter the pope firsthand through the liturgy). And in the latter years of John Paul’s pontificate, it was Cardinal Ratzinger—not just the Congregation for the Doctrine of the Faith (CDF) prefect, but also a senior member of the Congregation for Bishops—who would meet the bishops of the world in small groups on their ad limina visits, practicing the art of human contacts in the episcopate as John Paul’s health diminished.

It was Francis’s instinct for encounter that endeared him to so many people so swiftly after his election in 2013.
sharetweet

In September 2016, Pope Francis went to Assisi to take part in the thirtieth World Day of Prayer for Peace. He was at the apogee of public adulation just then, and it was tempting to see the event as a signal expression of his pontificate. Here were leaders of world religions, mingling amicably, praying in groups distinct to different faiths and then coming together as one. Here was the pope of the Global South, a religious leader among others. Here was Jorge Mario Bergoglio at the spot Francesco di Bernardone had given renown as a holy place, such renown that Bergoglio on his election could suggest the direction he meant his pontificate to take—simple, outward-facing, attentive to the poor—just by making the saint of Assisi his namesake.

But the event wasn’t just an expression of Francis or his pontificate. It was something like a capstone to a culture of encounter that had been developing in the Church, and the papacy, across several decades. At John Paul’s behest, the Community of Sant’Egidio had carried forward the Prayer for Peace in cities worldwide. And in 2011, Benedict—who as CDF prefect had taken a firm line on Catholic encounters with other religions—had sent a message of blessing to the event that affirmed encounter as a vital and generative aspect of the life of the Church. He gave particular attention to people who struggle with religious belief or reject it altogether. “Such people do not simply assert ‘There is no God,’” he explained. “They suffer from his absence and yet are inwardly making their way towards Him, inasmuch as they seek truth and goodness. They are ‘pilgrims of truth, pilgrims of peace.’ They ask questions of both sides.” He went on: “All their struggling and questioning is in part an appeal to believers to purify their faith, so that God, the true God, becomes accessible.”

Pope Francis’s rite of intercession at the beginning of the pandemic in March 2020 was likewise an image of encounter enriched by those that preceded it. Locked-down, I watched it on streaming video. It was a Friday evening. Italy was ravaged by the pandemic, and the streets of Rome were empty. Spotlights on St. Peter’s Square showed a hard rain falling. Francis strode toward the piazza, holding a gold monstrance before him, and sought the Virgin Mary’s intercession against the coronavirus. On one level, it evoked images of Pius XII, the prisoner of Rome, a figure set above and apart. On another level, it recalled John Paul at the Wailing Wall—a lonely man of faith carrying the heavy burden of Catholic anti-Semitism, which he sought to cast off, sometimes faltering. On a third level—the one proper to Francis—it showed a papacy transformed, with the pope, so long typed as God’s vicar on earth, now appearing as a representative of a human family forced into isolation by the coronavirus.

Fratelli tutti was written in the ensuing months, and it’s apt to suppose that its themes were sharpened by the coronavirus. The encyclical, in some ways a kind of anthology of Francis’s main themes, is an urgent account of the ways our common humanity draws us into encounters with one another—and the ways those encounters, which bring out the fullness of our humanity, represent the best way forward for a world civilization in crisis.

So to pose the question again: What is the culture of encounter? It’s an idea, rooted in Catholic tradition, articulated by Pope Francis, that’s now active in aspects of the Church ranging from spirituality to diplomacy to interreligious dialogue to culture and the arts. Unlike the idea of synodality, which is abstruse and Church-specific, the idea of a culture of encounter is broadly humanistic and straightforward enough that people of various backgrounds can aspire to it. I don’t think it’s an exaggeration to say that the success of the Synod on Synodality set to take place in Rome next year will depend on whether a culture of encounter is present there. Here’s hoping—and praying—that it is.

Why & How Day Wrote It