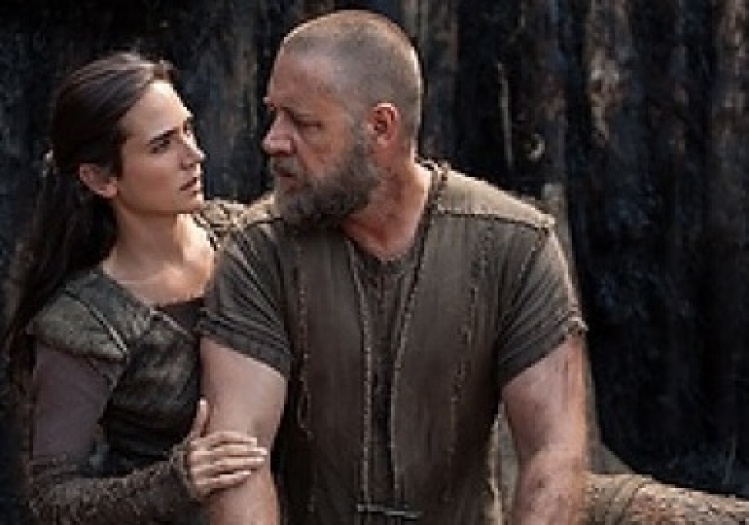 Hot on the heels of the impersonal and saccharine Son of God comes the daringly idiosyncratic and totally depressing Noah by writer-director Darren Aronofsky, a cinematic connoisseur of psychic and physical self-destruction (Requiem for a Dream, Black Swan). With this latest entry he may seem to be breaking into a new genre, the biblical spectacle. But rest assured: this master of misery is very much in his element as he envisions the sinful self-destruction of nearly the whole damned human race. Though there is much to censure in this movie, critics have taken aim at the one thing that should be most praised: the liberties the filmmaker has dared to take with the four-page biblical account. Why shouldn’t Aronofsky, like any self-respecting artist, supplement, abridge, and transform his source material to make it reflect his own vision of life? Do we attack Paradise Lost because Milton invented a backstory for Satan so vivid that (as Bernard Shaw pointed out) people actually believe it’s in the Bible? The real questions to be asked are: What sort of narrative does the adaptor evolve out of the original? Is it true to itself? Does it shed light on the human condition?

Scripture tells us that “the wickedness of man was great in the earth.” Aronofsky, perhaps with Cormac McCarthy’s The Road in mind or even TV’s The Walking Dead, uses Icelandic locations as landscapes of sterility and violence across which barbarian hordes roam for plunder and practice cannibalism. For me, this is more convincing than portraying decadence as orgies of gluttony and sex à la Cecil B. DeMille. Also, Scripture tells us that “there were giants in the earth in those days,” and the director daringly imagines these titans as angels who, against God’s wishes, chose to live on earth as benefactors (or “watchers”), trying to mitigate humankind’s post-Eden misery. They are therefore transformed by a pissed-off Jehovah into giants of stone, who look amusingly like Transformers and serve the same function—to squash villains threatening our hero. They also help Noah and his sons build the ark.

So far, so good: an ancient story reimagined for our pop culture–saturated times. But what about the characters who inhabit this story, including God? How have they been reimagined? The God of this movie is peculiarly silent, even sullen. In Genesis there is an ongoing dialogue between the Deity and humankind, and this interaction often softens the harsher episodes. The comforting paternalism of the Noah story may be what has made it a favorite for picture-book retellings. But in Aronofsky’s movie, after God announces his flood to Noah in a wordless dream, he shuts up, leaving the patriarch completely on his own to guess how to proceed during and after the oncoming catastrophe. And it’s just here that the film, unlike the ark, runs aground. Noah’s major guess, becoming the crux of the movie, is that the creator ultimately wants all human life to be obliterated, and this includes all descendants of Noah. Our hero latches onto this notion while seeking a wife for his sexually starved younger son Ham. Visiting some sort of barbarian camp, whose inhabitants he sees practicing all manner of degeneracy, he concludes that Ham must stay celibate and that the already-pregnant wife of his elder son Shem may be allowed only a male child, who will one day bury his parents and then die himself, leaving the planet to the only true innocents, plants and animals. If a female baby is born, she will be killed.

Say what? I’m guessing that Aronofsky’s Noah is meant to be a tragically wrong-headed figure like Shakespeare’s Lear or Melville’s Ahab, but even insane pride must have a logic of its own, lest the hero come across as just plain stupid. If Noah thinks God’s purpose is the extinction of the human race, why doesn’t he submit himself and his family to drowning instead of climbing aboard? What kind of God would save a few humans temporarily only to have them promote their own extinction? Is he ordering the building of the ark because he thinks Noah’s family needs exercise? In truth, this whole plot twist seems concocted for the sake of (a) spinning the plot out and (b) providing some factitious suspense for an audience all too familiar with the original tale. For of course Shem’s wife ends up giving birth to twin girls, and so we wonder whether Noah will do the grisly deed or not. And of course he can’t bring himself to do it: “I looked down at those two little girls and all I had in my arms was love.” Darren Aronofsky works up portents of righteous horrors but all he delivers is mush.

The visuals and the acting aggravate the screenplay’s problems. Quite rightly, the director decided his dark take on Scripture needed a darker visual tone than most biblical spectacles have. But apparently something went wrong with Matthew Libatique’s cinematography, and I strongly suspect it happened during postproduction in the computerized adjustment of color. For instead of lights, hues, and shadows taking on varied gradations to suggest contrasting emotions of hope and terror, compassion and hate—as even the low-budget Beasts of the Southern Wild managed to do—the digitalization here spreads an unrelieved, nearly monochromatic gloom over nearly every shot. The result is not only ugly, it’s boringly ugly.

Also monochromatic is Russell Crowe’s performance of the lead role. As recently as five years ago, Crowe was a vital, wide-ranging actor equally capable of getting into the skin of introverted scientists (A Beautiful Mind, The Insider) and extroverted warriors (Master and Commander, Gladiator). But here, as in the recent Les Miserables, Robin Hood, and Man of Steel, his voice has become a mystical monotone, and his face seems capable of no expression other than a bewildered sheepishness. The supporting cast is no better. Jennifer Connelly as Noah’s wife throbs out her soap-opera dialogue without once finding a truthful note, and Emma Watson, who played Hermione in the Harry Potter series, still seems enrolled at Hogwarts.

A single good performance can sometimes throw an otherwise bad film further out of kilter rather than saving it. So it is here with Ray Winstone’s role as a barbarian chief. Packing such zest and conviction into this embodiment of God-defying evil that he makes the heroes look like pious frauds, Winstone gets us to cheer for the wrong side. Though Noah is a moderately awful movie, it does at least feel like the expression of someone’s unique (and dreary) worldview. By contrast, Son of God felt like corporation spawn—a Hallmark card blown up to screen size and set in motion. If I have to watch a failure, I much prefer to have someone’s fingerprints on it. Nevertheless, my favorite modern version of the Noah story remains Bill Cosby’s. God: “Thou shalt build the ark three hundred cubits long.” Noah: “Right.... What’s a cubit?”

Published in the May 2, 2014 issue:
View Contents
Tags
Movies