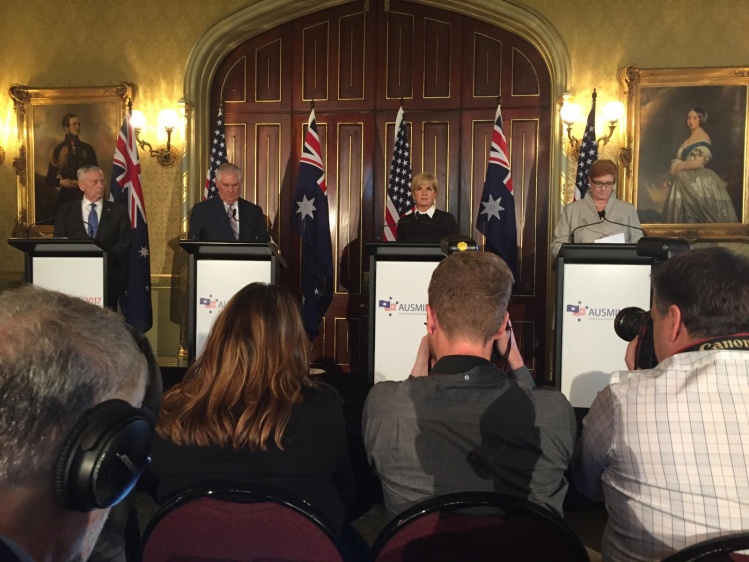 Agents from Australia’s Federal Police arrived at her door on a Tuesday morning in June, armed with a search warrant. The raid began in her bedroom. They went through everything: bedside drawers, the bed itself, her closet, the pockets of her clothes, her handbags, her underwear. They looked inside DVDs she didn’t even know she owned anymore and paged through all the books on her shelves. They rummaged through Christmas decorations, searched her sewing basket, and pulled down picture frames. It went on for seven hours, and it might have gone unpublicized but for one twist. Its target was Annika Smethurst, the national political editor of News Corp., the media giant owned by Rupert Murdoch. The raid of her Canberra residence came one year after she had reported that Australian federal law enforcement was seeking to expand its surveillance capabilities by gathering information on citizens’ phones and computers. The following day, the federal police struck again—seizing records from The Australian Broadcasting Corp., the nation’s public broadcaster, for reporting on the operations of Australia’s special forces in Afghanistan, which included the killings of unarmed men and of children. Police also obtained the personal travel records of Daniel Oakes, one of the ABC correspondents who broke the Afghanistan story, from Qantas Airways.

Journalists have been quick to condemn the raids and seizures as violations. More worrisome was whether they were meant as warnings. In recent years, Australia has passed more than sixty laws curtailing freedom of the press in the name of “national security.” Reporting by Smethurst and the ABC was clearly in the public interest, and the raids shocked media-watchers in this laidback land of sunshine and the “fair go,” a sort of national slogan that captures the ideal of egalitarian justice and opportunity. What does it mean when a country that calls itself a democracy attacks one of democracy’s defining principles?

Courtney C. Radsch, an advocacy director at the Committee to Protect Journalists who writes on press restrictions in Australia, says that she is hearing “a lot about what people are calling the criminalization of journalism.” Johan Lidberg, an associate professor of journalism at Monash University in Melbourne, calls Australia “a real enigma” when it comes to press freedoms. “I’ve lived here for twenty-one years, and the longer I live here, the more complicated it seems.” In June, he warned of the threat that recent regulations on the press pose, noting that the balance between the protection of civil liberties and the power of governmental authority is tipping dangerously toward the latter. He is one of many media experts advocating for either a constitutional amendment or federal legislation that explicitly protects media freedom and freedom of speech.

Both News Corp. and ABC have challenged the raids in court, but federal officials have defended them. “No sector of the community should be immune for this type of activity or evidence collection more broadly,” Australian Acting Commissioner Neil Gaughan told the ABC News Channel. “This includes law enforcement itself, the media, or indeed, even politicians.” Speaking to journalists in London, Prime Minister Scott Morrison said the raids had occurred without his government’s knowledge and that “Australia believes strongly in the freedom of the press.” But, he added, “There are also clear rules protecting Australia’s national security and everybody should operate in accordance with all of those laws passed by our parliament…. It never troubles me that our laws are being upheld.”

The freedoms to which Morrison alluded are limited. Australian courts have established the existence of an “implied” freedom of political communication as essential to a healthy democracy, but there is no equivalent of the U.S. Constitution’s First Amendment. While there are certain protections for journalists, there are none for their sources, including government whistleblowers, who often face criminal prosecution for revealing information without permission.

“Australia is sometimes described as having a ‘Washminster system,’ a mix of Washington and Westminster,” Lidberg said. “Australia has taken the intent of U.K. laws in pursuing whistleblowers but didn’t take the U.S. Bill of Rights, which is one of the best things that a journalist has.” Court-issued gag orders are also common, and they impose additional restrictions. In the case of Cardinal George Pell, convicted last December of sexual abuse of minors, journalists were prohibited from reporting on the verdict to ensure a fair trial for Pell in a second case, which was dropped before its scheduled hearing. But some three dozen outlets, journalists, and editors were charged for contempt of court for violating the order, even for only alluding to the verdict. Journalists are additionally inhibited by the country’s defamation laws, which put the burden on the accuser to prove that an allegation is likely to be true based on the balance of the evidence. Fear of defamation lawsuits has prevented many Australian #MeToo allegations from becoming public. In the United States, in contrast, public figures must prove that the reporting is wrong and is published with malice.

Still, it’s the sheer amount—and the reach—of Australia’s national-security laws that most concern media advocates. “There are so many that it sends a message to journalists: this is just too hard to report on,” Lidberg said. That number began to rise in the immediate aftermath of 9/11, and it has steadily increased ever since. Among the measures the government unsuccessfully sought to enact were laws that would have mandated prison sentences of up to twenty years for journalists receiving secret information—whether or not they published it. While that proposal failed, a law was passed in 2017 requiring telecommunications companies to retain data for two years that identifies the sender and recipient of emails and phone calls, as well as the device from which those communications were sent. The law technically includes carve-outs for journalists, but many say they remain insufficiently protected given loopholes that any skillful government lawyer could take advantage of. The warrant executed in the ABC raid, for example, was reflective of the general trend toward broadly worded laws that government agencies take advantage of to request data that has little to do with national security.

Further, Australian officials have not hesitated in pursuing prosecutions. Just last week, a whistleblower known only as Witness K pled guilty to conspiracy charges for divulging that the Australian government bugged a cabinet room in East Timor where officials from the two countries were negotiating an oil-and-gas deal. Australian authorities also charged Witness K’s lawyer under national-security laws, even though the eavesdropping involved the economy. (The lawyer, Bernard Collaery, has vowed to fight the charge in court.)  The Sky News broadcaster Ben Fordham is being investigated for reporting on attempts by Sri Lankan asylum-seekers to reach Australia by boat. (This comes on top of efforts by the Australian government to deny media access to information about detentions of asylum seekers on the islands of Manus and Nauru.) And a government debt collector faces multiple charges for telling the ABC that the Australian Tax Office had implemented heavy-handed garnishment policies that he feared would force businesses to close and inflict needless pain on affected owners.

Australian journalist Peter Greste wrote in a recent column that the raids on Smethurst and ABC remind him of his own arrest and detention in 2013 in Egypt while reporting on the political turmoil there. “At the time, Egypt had come to define ‘national security’ so broadly that anything that questioned, challenged, or interrogated the government or its inner workings was considered tantamount to treason and prosecuted harshly. That’s why the AFP raids sent a familiar shiver down my spine.” Greste told me he understands that national-security agencies need new laws to keep pace with technology, but that Australia and other countries are also using this as an excuse to whittle away at press freedoms. “There is a lot of discussion about the balance of press freedom, that if you give more to one you take away from the other, and I think that’s a bit of a fallacy,” he says. “I think the two are parts of the same system. One of the reasons we have one of the most stable democracies in the world is because we have a free press” that can hold the government to account.

As a longtime American journalist who has lived in Australia for the last four years, I was initially shocked by the raids on Smethurst and the ABC. Something like this wouldn’t happen in the United States, thanks to First Amendment protections. Yet then I recalled last spring’s raid of a freelance journalist’s home by San Francisco police. I thought of the Obama administration’s aggressive crackdowns on leakers and whistleblowers. And I see, from here in Australia, how the current president of the United States continues to use terms like “enemies of the people” when describing the media. My response to the invasion of Annika Smethurst’s home soon morphed into a shiver down my own spine. The United States is not as aggressive as Australia, and Australia is not as aggressive as Egypt. But things can change quickly if we’re not paying attention. Freedom of the press is something that may disappear slowly at first…and then all at once.