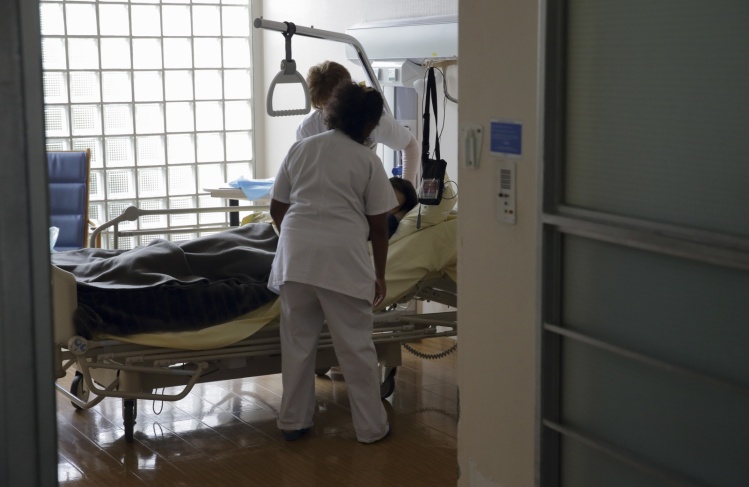 Nurses provide care to a patient in 2015 at the palliative care unit of a hospital near Paris. (CNS photo/Philippe Wojazer, Reuters)

Jesus’ love for us means he knows us better than we know ourselves. (I don’t know how many hairs are on my head, for example.) I have been a hospice volunteer since 2009, and have seen the kind of love that grows from intimacy and familiarity. When I began volunteering, I worked in a nursing home where I got to know a number of patients well because they were on the hospice list for a while, defying the odds.

Take “Evie”: she was ninety-eight, and Alzheimer’s had taken her ability to speak. She’d say “mmm-mmm-mmm” in variations of tone, and she could respond to questions by nod or headshake. I didn’t know what she was saying, but I knew how she felt about whatever it was. “Tell me about your family,” I’d say—and she’d answer mm-mmm-mm. “You had brothers?” Nod. “Sisters?” Headshake. “Did you like having brothers?” Nod, then headshake. Our weekly visits lasted for months.

The aides at the home had known Evie when she could still speak, so they knew that she loved clothes. One day, I wore a new red sweater. Evie didn’t say mmm-mmm. She said, “You look great!” Then she reverted to mmm.

Love binds us all across the gap of death.
sharetweet

I’ve come to learn that love is reciprocal. If we love our patients because we care for them and they also love us, it’s not especially to our credit. It’s just the way love works.

I had the opportunity to get to know many patients well. But what about when you don’t know the one you’re loving? After all, the Samaritan doesn’t get to know the victim he rescues.

When I worked at St. Clare’s Hospital, an AIDS center in New York, I met “Ronnie,” a handsome man with a powerful build who was hospitalized two or three times during my first year. I got to know him only a bit. He told me that his mother had been raped by her father. I didn’t know if he thought that his grandfather was also his father. Then he said he’d made some big mistakes. He’d spent time “upstate,” meaning in prison.

During that year, there were staff cutbacks at the hospital. Ronnie joked that with only two nurses for twenty patients, they should be given rollerblades with their stethoscopes. We chortled over the idea of our middle-aged nurses on skates.

Over time, Ronnie got weaker, but to me never seemed in danger of death. So I was shocked when I heard one day that he had been moved to intensive care. I found him in a tiny room alone, hooked up to pulsing screens and plastic tubes. His eyes were closed. I greeted him. Could he hear me? Did he know who I was? I sat with him for a while, praying silently that he would recover. Then I left.

Ronnie died the next afternoon. He was thirty-one.

Somehow, very mysteriously, my commitment to the patients at St. Clare’s changed when Ronnie died. Before, I went to the hospital once a week for a few hours because I had made a commitment to do it, because it was the right thing to do. But after Ronnie died, I wanted to go. Before he died, what little I did at the hospital seemed like nothing much, even if I was able to help people feel better temporarily. After he died, what I did seemed necessary.

As little as I knew him, Ronnie knew me even less; we didn’t have a relationship. But his death allowed me to learn something new, something that cannot be clear when a death you experience is that of your own loved one—when your view is obscured by your grief. When your neighbor dies, it’s different: your loss is not about you.

When we are injured, when our skin is broken, the edges of the wound immediately begin to grow together, to reach across the gap. When Ronnie died, those of us still living, his neighbors, had to close the wound in the skin of humankind, the Body of Christ. Jesus’ unrelenting love reaches through us to each other—closing the wound in His body. Love binds us all across the gap of death.

Linda Dickey is a board certified chaplain at the Hospital for Special Surgery in New York City.