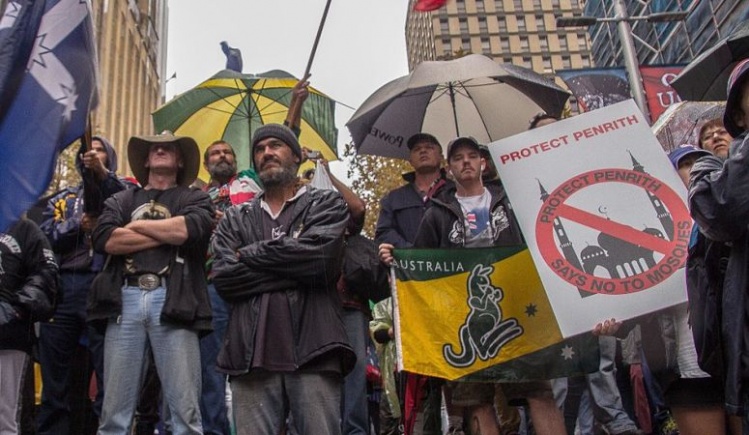 Last summer Australians were treated to an instructional video from Senator Pauline Hanson on how to use a toilet. She was inspired to make the video following news that the Australian Tax Office had installed two squat toilets to accommodate employees from countries where the floor-level facility is standard. “It’s not just about the dollars,” Hanson declared later on Facebook. “It starts with toilets and ends with costing us our Australian way of life.”

Such overt signs of xenophobia here in “the Lucky Country” can still come as a surprise. Since moving from Philadelphia to Brisbane, Australia, last year, my husband and I have instead taken note of what seems like the stronger feeling of social cohesion among Australians in contrast to Americans. Australians have universal healthcare, for instance—and they like it. In a recent campaign, the Labor Party tried to scare up votes by warning that the Liberal Party, which is the conservative party here, wanted to bring “American-style” health care to Australia. The country also famously implemented strict gun controls after the 1996 Port Arthur massacre. Australia even manages something I previously thought impossible: Clean public bathrooms available every few blocks. The people are so friendly that they strike up conversations with me in the store and keep talking as we head out to the parking lot. After I mentioned an illness on my Facebook page, two parents I’d met only recently offered to take my son to school or fetch groceries. My hairdresser has invited me to socialize with her friends so that I can have a few myself.

Australia so values what it calls “mateship”—helping one another in times of adversity—that politicians in 1999 pushed to include the term in the preamble to the country’s constitution. In school, children learn the concept of mateship through the story of John Simpson, who with his donkey allegedly ferried hundreds of wounded Australian and New Zealand soldiers to medical care during World War I. Australians pride themselves on giving everyone a “fair go,” which is pretty much what it sounds like: Everyone is treated equally and works together. Australia always ranks several notches higher than the United States (ninth vs. thirteenth in 2016) on United Nations surveys about which countries are happiest. Our American friends frequently tell us how lucky we are to be here: We won’t have to live through a Trump presidency firsthand, and we don’t have to worry about our children being caught in gun violence.

But there are some shadows. Though Pauline Hanson’s squat-toilet protest seems meant to tap into sentiments in regions where factories are closing and economic anxiety is increasing, it also echoes the nation’s troubling racial history—beginning with the slaughter of the indigenous peoples and continuing on up through the whites-only immigration policy in place until 1973. It’s also playing against the backdrop of the alleged abuse of refugees and asylum-seekers, many of them Muslim, detained on the remote islands of Manus and Nauru under conditions that University of Sydney political scientist David Smith characterizes as a “tropical concentration camp.” Taken with news reports of young men of Aboriginal descent being strapped down and hooded at detention centers in the Northern Territory, it is raising the old ghost of “White Australia,” the shared belief in the nation as an outpost of white civilization in the middle of the Pacific expanse—an image that persisted into the 1990s and that few might have expected to see return.

THE NICKNAME “the Lucky Country” today conjures the sunshine, turquoise surf, and koalas that symbolize Australia. But the term originated with Donald Horne’s eponymous 1964 novel: “Australia is a lucky country,” he wrote then, “run by second-rate people who share its luck.”

More recently, in 2012, then-Prime Minister Tony Abbott called Australia “a blessed country.” He hailed the climate, the land, the people, and the institutions that “rightly make us the envy of the earth.” But he noted a major exception: “We have to acknowledge that pre-1788, this land was as Aboriginal then as it is Australian now, and until we have acknowledged that, we will be an incomplete nation and a torn people.”

Australia’s national success has excluded the country’s indigenous population. The English killed untold numbers of Aboriginal people, seized their children, and took their land—amassing fortunes from the rich deposits of bauxite, iron ore, and other resources. Today many indigenous people live in poverty, beset by high rates of unemployment, suicide, and substance abuse. It’s worse in the more remote communities, according to Smith. “There’s such a massive gap between the way that many Aboriginal people live and the way that the rest of the country lives, and also a lot of resistance to thinking about the problem.” He believes a treaty between indigenous peoples, who represent about 3 percent of the population, and the government of Australia would represent a significant step toward reducing inequities.

The British Crown signed a similar agreement, known as the Treaty of Waitangi, with the Maori people of New Zealand in 1840. New Zealand itself went so far as to negotiate language in the Trans-Pacific Partnership (TPP) agreement saying that it could never override the treaty. Today, Waitangi, along with the treaty between the Canadian government and its indigenous peoples, are often cited as potential examples for Australia. Australian leaders agree in principle but have failed to act. As prime minister, Abbott stopped short of recommending a treaty and supported the relocation of Aboriginal people to locations closer to jobs—a proposal many felt echoed colonialism. This “one step forward, two steps back” approach has confused the debate, and a treaty remains elusive. Smith says the lack of action reflects “the totality of the European victory in Australia. No group in that position simply gives up some of its sovereignty.” In New Zealand, he said, the Maori were more successful at fending off the British, partly because they were more nationally cohesive and partly because the British had sold them guns.

The detention of migrants on Manus and Nauru poses additional concern. On Nauru, aid workers were required to sign confidentiality agreements saying they would not publicly discuss problems on the island, where according to some reports up to sixteen-hundred asylum seekers and refugees have been detained. Peter Dutton, Australia’s immigration minister, has said complaints about conditions on Nauru are exaggerated, though his assessment is disputed.

“There are a lot of horrific concerns about things that are going on—a lack of mental health services, and poor health care,” said Elizabeth Redman, a correspondent for The Australian newspaper. Journalists and other groups have found it nearly impossible to get information out of Nauru, fueling skepticism about the government’s claims. Viktoria Vibhakar, a former aid worker for Save the Children Australia, risked jail time by going public with reports of the conditions on the tiny, barren island, which included sexual assaults of children.

Holding firm in the face of international pressure, the government of Prime Minister Malcolm Turnbull proposed legislation in October 2016 forever barring the detainees from coming to Australia. The administration also expanded maritime and air surveillance to turn back boats at sea believed to be carrying asylum seekers. In November, the United States stepped in, striking a one-time agreement to take in detainees from Manus and Nauru, beginning with women, children, and families. Those who choose not to accept the offer would be forced to return to their homelands or could settle on the islands under a twenty-year visa agreement. At the time, Turnbull said there was no guarantee the agreement would be honored by U.S. President-elect Trump, and indeed, in a late January phone conversation between the two leaders, Trump angrily criticized what he called the “dumb deal” (an assessment he reiterated on Twitter a couple of days later). The Trump administration has since sent mixed messages on whether it will honor the agreement or not.

If Australia may be in a position similar to that of European nations facing an influx of migrants, its history further complicates the picture. The very notion of “mateship” itself might be a contributing factor; many people feel tales of mateship revolve exclusively around white men. Indeed, the attempt to enshrine the concept of mateship in the Australian constitution failed in part because it was perceived as too “blokey,” leaving out women and anyone who isn’t white.

These lingering realities can bump up against the “progressive” image that Australia has of itself, from its strict gun control to its minimum wage of $13.36 per hour in U.S. dollars to the recent softening of attitudes toward Asian countries it once viewed as economic competitors. And then there’s a relatively new phenomenon: dissatisfaction with major political parties. Voters disillusioned with establishment politicians are turning to those they consider outsiders, mirroring feelings in the United States about Republicans and Democrats. Indeed, though Pauline Hanson first came to federal office in 1996—when Australians feared waves of Asian immigration—she was voted out in 1998. In 2013, she reassumed leadership of Australia’s populist right-wing One Nation Party, which she’d founded in 1997, but was out of elected office until 2016, her return overlapping with rising anxiety about Muslim immigrants. In promising to ban immigration and prohibit the building of new mosques, she is now said to be the most obvious mimic of “Trumpist populism” in Australia.

As I hung out my wash in the sun one day, an acquaintance urged me to list my religion on the national census form. A public relations campaign was urging people to list “no religion.” This acquaintance didn’t want me to think she was a racist, she said. She just wanted me to know that the Muslims would list their religion, which would allow their organizations to get more government funding. It was only fair, she argued, that other religions do the same. I told her I was happy to note we’re Catholic.

That was just before the U.S. election. At the time, Hanson seemed easier to dismiss, much as Trump was when he was better known as a reality-television personality and leader of the birther movement. But his victory, along with the Brexit vote, have boosted the popularity of Hanson’s One Nation Party. Now the media talks about her influence through 2017 and beyond, while detailing her plans to further expand a growing political empire.