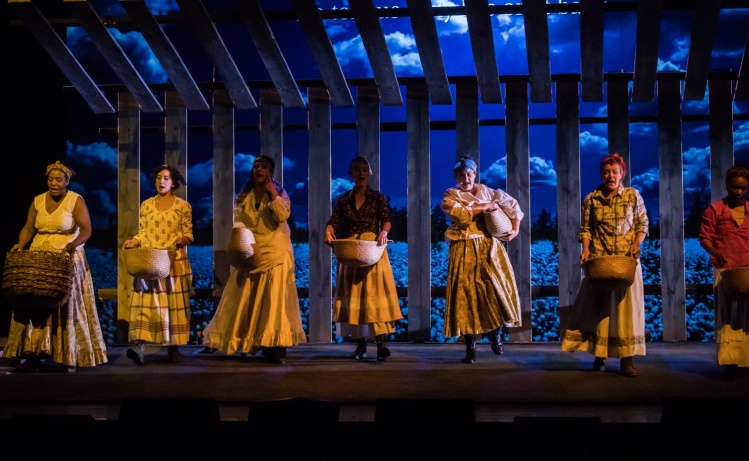 Two news stories highlight the contentious topic of cultural appropriation. The New York Times reported last week on the fury over a show, called “Slav,” put on at the Montreal Jazz Festival. Billed as “a theatrical odyssey” exploring the history of slavery via “traditional African-American slave and work songs,” “Slav” had a white director and star, and a mostly white cast. This spurred comparisons with blackface; cast members were heckled amid charges that “white artists had recklessly appropriated black culture.” The show was canceled after just two performances, with the festival management issuing a statement apologizing “to those who were hurt.” Here in the U.S., meanwhile, actress Scarlett Johansson's planned portrayal of a transgender man in the film Rub & Tug has sparked a similar backlash, with transgender activists insisting that the role should go to a trans actor.

The concept of cultural appropriation traces to colonial-era critiques by such writers as Frantz Fanon, Antonio Gramsci, and Paulo Freire; today, it tends to take on such issues as whether it’s acceptable for white people to wear dreadlocks, or whether, when singer Katy Perry performed as a geisha at the American Music Awards in 2013, it constituted a tribute to Asian culture—as Perry insisted—or rather a “yellowface” insult. The basic idea is that artifacts, styles, or modes of expression constitute possessions of the cultures that develop them; and that their use by artists or performers who don’t belong to those groups represents at best a travesty, at worst a kind of theft. Those promoting this idea view it as crucial to the defense of cultural patrimony against a plunder akin to that of nineteenth century archaeologists, whose “discoveries” in remote places were carted back to stock European museums. Those opposed view it as a lamentable excess of political correctness and identity politics.

You can trace the idea across the spectrum of cultural production. There’s the Portland, Oregon burrito cart owners who got called out for “stealing” their recipes during a trip to Mexico. The French fashion brand Chanel caught flak for selling a boomerang for $2000 and thereby appropriating aboriginal culture. There’s actor Zac Efron’s new dreadlocks, or Kim Kardashian’s braided ‘do at the MTV Movie Awards. (Hairstyles are an object of particular controversy.) Two Twitter users duked it out over that hairdo. “Braids have roots in all of history,” one commented; “the longer you continue to fight for equality, you have to move on from things like limiting hairstyles to one race.” The response questioned both Kardashian’s intent and her standing, zeroing in on the issue of trespass: “Why is she dead set on only using African styles and not Armenian ones?”

Criticisms of cultural mimicry and costume reveal a hierarchy of offense. For a white American, donning a Mexican sombrero is a no-no, imitating a Chinese accent is worse, and dressing like an African “tribesman” would be beyond the pale. Yet wearing lederhosen to a beer party doesn’t seem to bother anyone. And a black comic like Chris Rock can imitate white people—and it’s funny. The truth is that every nation has its own particular raw spots, reflecting past offenses by the powerful against the dispossessed; and in the United States, the rawest is our history of racist exploitation against black people. If you go around speaking with a German accent, people will find you eccentric, but not offensive. But when African American author Carvell Wallace denounces (white) singer Meghan Trainor’s “blaccent,” calling it “stolen language,” and asks, “What does it mean that Meghan Trainor’s voice is, technically, an approximated black one that comes from a white body?”, white people are put on alert—not least because he’s echoing themes set forth in stinging critiques by race-focused writers such as Ta-Nehisi Coates. Trainor’s action abrades that American raw spot.

The cultural-appropriation critique takes a swat at liberal complacency. Criticizing the casting of Scarlett Johansson, and citing instances of cisgendered actors winning awards for portraying trans characters, the trans actress Trace Lysette, from the TV series Transparent, commented acerbically: “Not only do you play us and steal our narrative and our opportunity but you pat yourselves on the back with trophies and accolades for mimicking what we have lived.” Not sympathy, then, but larceny: larceny and self-congratulation. The stealing-our-narrative trope Lysette deploys is everywhere these days, one of those signal ideas that exists both at the theoretical-academic level and at the Oprah-daily-life level. How do we frame issues, and who gets to? Who owns the story? Our understanding of history, politics, and group identity increasingly resembles a never-ending political campaign, with its imperative to frame or be framed. In this light, narrative is essentially a means of production; the power to define becomes the power to own and rule, and an act of imaginative projection—even a sympathetic one—is viewed not only as exploitation for profit, but a presumption or an act of outright occupation. What gives you the right to tell my story?

The last time I wrote about cultural appropriation, I was circumspect in offering judgment, but I’ll be less guarded now. I think the concept is misguided.
sharetweet

The answer for artists, of course—and the problem—is that art gives you the right. Not only the right, but the obligation. The director of “Slav” has called cancelation of his show “a direct blow to artistic freedom.” Noting that the very concept of theater presupposes the action of pretending to be somebody other than oneself—and that this in turn may require us to “borrow” someone else’s look or accent—he defines acting as a means of “stepping into the shoes of another person to try to understand them, and in the process, perhaps understand ourselves, better.” He goes on to assert that “when we are no longer allowed to step into someone else’s shoes... theatre is denied its very nature.”

The last time I wrote about cultural appropriation, I was circumspect in offering judgment, but I’ll be less guarded now. I think the concept is misguided. When the “Slav” director talks about “borrowing,” it might sound like a euphemism, but in fact it defines an essence of what artists do. And not only actors and writers. What about Picasso? What about white musicians and singers performing blues, hip hop or jazz? Or Ken Burns making a documentary about it? What about the popular (and excellent) Thai restaurants Pok Pok, which were started by a non-Thai American? Here in Connecticut, where I live, a talented chef, Tyler Anderson, veteran of several TV cooking shows, has opened a terrific tapas restaurant. Anderson spent time in Spain, working with chefs and learning food traditions. But he’s no Spaniard—just a guy from California. So should he not serve Spanish cuisine?

Where is the line between appreciating a cultural mode or product and appropriating it? Is it possible to use that oft-invoked, oft-disparaged faculty, common sense, to distinguish what is truly insulting—real blackface, for instance; or drunken sports fans waving tomahawks; or a travesty like this—from what is merely theoretically or arguably insulting? Anyone can make an argument; but that is not the same as experiencing actual hurt. And yet... who gets to define or assess that? The problem of standing—in a legal sense, the sense of being the primary stakeholder—is not easily dismissed.

For my own part, in the early 1990s I published a story in Harper’s Magazine called “Kerenyaga,” whose protagonist was a young Kenyan immigrant in Washington, D.C., enduring a hard interlude of homelessness. I based the narrative on experiences I’d had a decade earlier while living in East Africa; it was precipitated by an encounter with a young Kenyan here in the United States, whose company triggered a rush of memory, language, and ideas.

In today’s environment, my story would register high on the cultural-appropriation meter. Yet I consider it one of the best things I’ve ever written, and I believe moreover that it treats the character and his predicament with humanity, sympathy, and interest. To be sure, I can hear the refrain: There he goes again, another liberal white artist stealing the narrative—and patting himself on the back. But for me the challenge in writing the story was not ethical but artistic: not, Do I have the right but Do I have the chops? Am I good enough to do this persuasively? I recall the dealings I had with the editor at Harper’s. They transpired entirely over the phone and by mail, so that we never met face to face. Only when we were done editing the story did he ask, as a kind of curious afterthought, “Are you African American?” I’m guessing that question would be front and center today. It might even be dispositive for the story’s publication. Is that a good thing?

Fifty years ago, debate raged over William Styron’s novel The Autobiography of Nat Turner (Sam Tanenhaus revisited the controversy in a 2016 essay in Vanity Fair). White writers such as Willie Morris, Richard Yates, and Wallace Stegner lavished praise on the novel; John Cheever wrote an ecstatic letter to Styron, calling it “a work of genius.” But African American writers objected to what they saw as a skewed portrayal of a black rebel by a white novelist, and their dissenting (and sometimes scathing) commentaries were published in a book called William Styron’s Nat Turner: Ten Black Writers Respond. Styron considered himself a staunch liberal—a liberal, moreover, from the South, eager to renounce what he viewed as its tragic race history—and was stunned and dismayed to find his book deemed racist. In his colloquy with his black critics, and in accounts of readings at which he was taken to task by angry audience members, one discovers an antecedent to the bruising battle going on today. Did a white writer have a right to this story? Accused of having created, as he would recall decades later, “a malicious work, deliberately falsifying history,” Styron had “unwittingly created one of the first politically incorrect texts of our time.”

The battles over cultural appropriation disclose not only contending claims, but contending aims. Not everyone lines up according to type. In the aftermath of the brouhaha over “Slav” in Montreal, a black Canadian actor named Fred Pierre attempted to build a diplomatic bridge. While acknowledging the long history of racial and colonial oppression, he counseled people to move beyond such divisions, toward a larger unity. “Let the white artists be touched and moved by black history and the songs it generated,” he wrote on Facebook. “Leave the artists in peace.”

If only it were that simple.