Coming Home by Teaching the Beatitudes according to Lúcás Chan 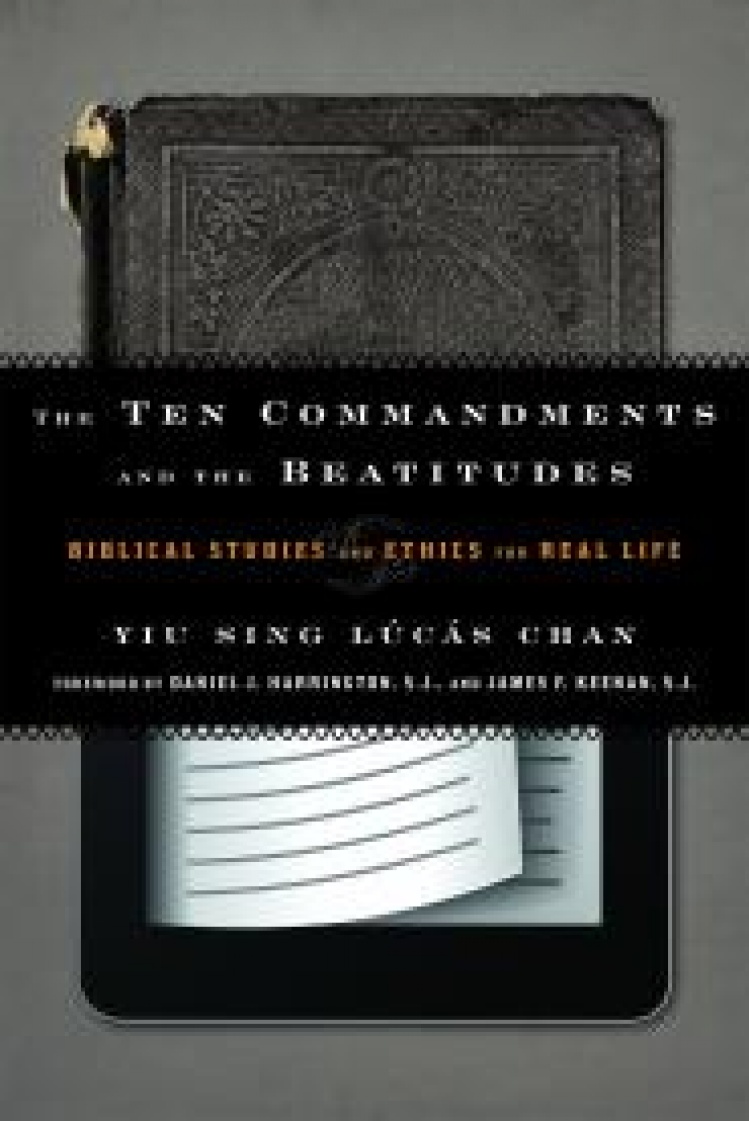 After two weeks of teaching a bioethics course in Pune in the second half of June, I began July in Bangalore where I taught a very intensive two week course for 26 licentiate and doctoral students meeting 4 hours a day.

The course was “Biblical Ethics” and it was to be team taught by Lúcás Chan and me. Though I team taught courses frequently with Dan Harrington and with Roger Haight, this would be my first time team teaching with a former doctoral student. We agreed to meet in Bangalore on July 1 a little more than two weeks before Chan would be chairing the first ever Pan Asian conference of Catholic Theological Ethicists. We had each written two books in this fairly new field that Chan pioneered. Unfortunately, as many of you know, Chan died of a heart attack on May 19th.

In this light, I decided I should only teach his work. I thought, if I taught both his and mine, more students would naturally ask me about mine. Besides they probably would have been more deferential to my work, though Chan’s you will see is the more significant.

The decision was a good one.

Unlike anyone before him, Chan established normative criteria for doing biblical ethics. In Doing Biblical Ethics in the 21st Century: Developments, Emerging Consensus, and Future Directions, he insisted that writing biblical ethics required exegetical competency as well as a competency in ethics, particularly in proposing a method for applying the exegetical insights to ordinary moral life. Additionally Chan argued that virtue ethics was a most worthy method for making that application.

Chan learned this from assisting the biblical exegete Dan Harrington and me in our team teaching. He also saw that others, like biblical theologian John Donahue and ethicist William Spohn had also worked together to highlight the needed double competency. While Catholics had more modestly divided the competency into a team approach, Protestants Allen Verhey and Richard Burridge had each managed to write with both competencies. When Chan then wrote on The Ten Commandments and the Eight Beatitudes: Biblical Studies and Ethics for Real Life, he became the first Catholic to actually achieve the integration in his writings by honing the double competency. Not surprisingly, Margaret Farley called the work “a major step forward,” Dan Harrington called it “a milestone,” and Alain Thomasset in Paris called it a “tour-de-force,” a “classique”

This double competency might seem self-evident to the reader, but Chan shows us in Doing Biblical Ethics how major biblicists like Frank Matera and Richard Hayes, and major moralists like Bernhard Häring might have attempted a biblical ethics, but ignored the very competency they were lacking.

Moreover, exegesis, the science that aims to understand the meaning of the biblical texts when and as they were written, is a relatively new science, going back to the end of the nineteenth century. Still, Chan found many ethicists who in trying to develop writings on biblical ethics were very pastoral, but by their lack of exegesis, they were not very biblical. Likewise, biblicists pretending to be ethicists never appropriated an adequate method for making their ethical application.

I taught his six major essays and two books. The last essay that he wrote was on immigration today and the hospitality of Boaz, the post-exilic figure who welcomes Ruth and Naomi. Chan saw in an anxious Israel and the decisive presence of Boaz, a relevant hero from whom many lessons could be drawn for today’s unsettling immigrant world. In fact most of the students did their papers on Boaz, such was the relevance of the lessons that Chan drew.

But what we most studied were his ten commandments and the eight beatitudes in which he treated each of the eighteen teachings with an examination of exegetical claims and then an application through virtue ethics. As he explains in his introduction, these are the two pillars of Christian morality or, echoing Raymond Brown he writes, “the Decalogue expresses God’s will while the Beatitudes reveals the values Jesus prioritized.”

Along with the exegetes, Chan chooses Matthew’s Beatitudes because of its coherence. Moreover, the radical nature of its summons is for all Christians and even if perfection is not achievable, it is still a way that we should strive to follow: it instructs us on which anthropological values Christ wants us to develop. Here, he finds John Climacus’s “ladder” approach to growing in virtue helpful.

For the first beatitude, “the poor in spirit,” Chan with other exegetes like Hans Dieter Betz insists that these poor are not only spiritually so; their condition is such that being without everything, being in a word beggars, they are in special need of God’s help. Chan, who grew up in poverty, writes that “the poor in spirit who often suffer from economic poverty are those who acquire the internal attitude of humility.”

Here then Chan shifts and argues that the condition “poor in spirit” brings on an attitude, “poor in spirit.”  The attitude is the equivalent of the virtue of humility. Chan points out that this humility is a spiritual emptying out; he writes, “humility means accepting the complete poverty of our human condition.”

For each of the beatitudes, Chan begins the section on ethics, by first naming a virtue that expresses the particularity of the beatitude. He then offers how the virtue functions, what practices express it, who exemplify it, and what is the social context that most needs the virtue.

For the first beatitude, Chan underlines how from Climacus, Chrysostom, Ambrose and Augustine to Gerald Vann and Johannes Metz, all found humility as the foundation of any Christian anthropology. The practices of humility begin with the acknowledgement of God as the ultimate source and meaning of our lives, which leads us to renounce anything that separates us from God, that in turn requires an ability to be both detached as well as free to share what we have, and which depends on ascetical practices of self-denial. Exemplars begin with Jesus who tells us, “Take my yoke upon you, and learn from me, for I am gentle and humble of heart” (Matt 11.29).

Chan begins each chapter with, “What did the text proclaim?” For the second beatitude, Chan notes how Matthew notes that his mourners will be comforted, while Luke’s will laugh. At the start, Chan wants to know who is mourning about what. Again he turns to Betz who suggests that grieving in the second beatitude is directed to the poor in the first.

Chan is aware of the banality of many ethicists and preachers who insist that the beatitude is a summons to mourn, for if one denies one’s own grief one will never know the comfort and happiness that follows, in other words a cheap summons to grief counseling. But Chan notes, “no one is being told to mourn!” “The object of mourning is not so much one’s own suffering…mourning points to an other-oriented moral value.” Then emphatically he writes, “Such is the lot of the disciples of Christ—when our brothers and sisters suffer, we cannot help but mourn. This is very different from other interpretations of the beatitude, such as the ‘call to console’ proposed by Häring. The beatitude is not about that; it is about a certain disposition that genuine disciples have with one another, such that if one suffers, the other mourns as well.”

Solidarity is the virtue of the second beatitude. The practice related to solidarity is not comfort, but rather mourning itself. “In mourning the self tries to identify with the other. Mourning is then the ready subordination of one’s own comfort and well being to the suffering of another.”

Climbing the latter further, Chan takes us to the third beatitude, the meek who will inherit the earth. Here Chan surveys the exegetes and uncovers, as in the first beatitude, the difference between condition and attitude: “while the term ‘meek’ as a condition tends to refer to the poor, the powerless, and those who mourn, as a moral attitude it considers also the rich and powerful.”

When he turns to the virtue of meekness, he turns to the question of arrogance in the powerful and argues that “the virtue of meekness helps our desire to dominate into a vital force to serve.” He adds, “we need to emphasize it as a virtue for the poor and the powerful.” Here he turns to Monika Hellwig’s astute observation that the powerful “need to unlearn those patterns of behavior that control and dominate others and that ‘defend’ their possessions and prestige at the cost of others.” In a fairly remarkable application to social context, Chan explores how meekness would look alive in the corporate world.

We could follow through on the remaining five beatitudes, but what is so refreshing in each of these instances, (most beatitudes are treated by Chan exegetically and ethically in 5-6 pages) are the ways Chan engages the double competency. In the fourth beatitude, for instance, knowing the biblical investigations he appreciates that “God’s righteousness as revealed in Scripture is very different from our contemporary understanding of justice.” To get us to a right understanding of what we are to strive for, Chan, who taught on three continents (Asia, Europe and North America), tries to coax us from our assumptions and tries to lead us to understanding what exactly the text might mean and why that makes a difference for how we should live as Christians. Once we understand why we should strive for the righteousness of God, Chan leads us to understand fortitude as the virtue of the fourth beatitiude.

I have learned many lessons this summer about friendship, about life and death, and even about the struggles and hopes in Asia, particularly in India, but here I learned, for a brief moment, to give up teaching my own agenda and to engage the agenda of a younger person, a man I knew and loved. In accepting his agenda and making it my own, I found that I learned a lot about the commandments and the beatitudes, especially the beatitudes.

In a way by mourning for his loss, I learned something about solidarity and meekness and fortitude, but especially humility. In his writings, I studied these two moral pillars of the Christian tradition that gave me a way to find my own way home. After 50 days of moving literally around the world in grief, to funerals, classes, and yes, even international conferences, my Asian pilgrimage comes to a somewhat strangely satisfying end, because I learned to let go from one who surprisingly went before me.