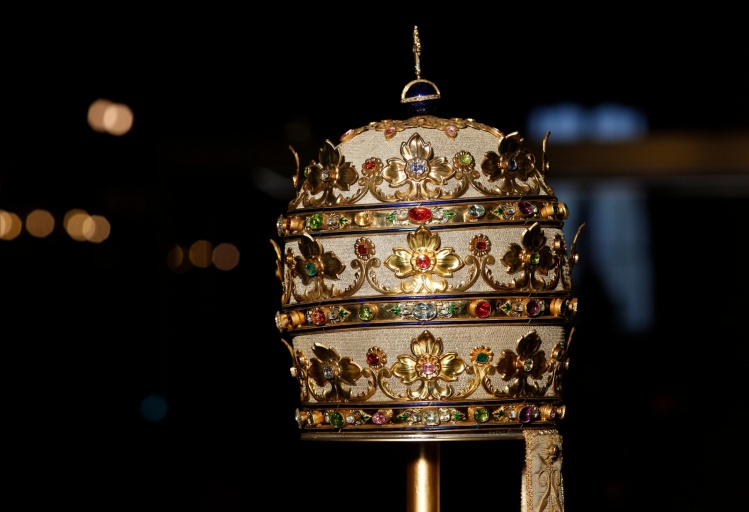 Asked to name the most salient development of the past thousand years, the distinguished historian John O’Malley, SJ, has not hesitated to choose the “growth of papal authority and prestige” in the Western Church. To designate this key development, he coined the neologism “papalization.” That term does not appear in his new book. Rather, the more traditional “ultramontane” does the work of describing a pope-centered church in which we take for granted that the bishop of Rome writes encyclicals, convokes councils, and declares saints. The historical forces that helped to create the ultramontane church, O’Malley writes, culminated at Vatican I. Indeed, he mentions more than once that Vatican I spelled “the soft and definitive end of ecumenical councils.” O’Malley reminds us that we did not always have an ultramontane church, and he raises the question: “In what ways and to what extent is the Catholic Church ultramontane today?”

Vatican I: The Council and the Making of the Ultramontane Church is not a book that we might have expected O’Malley to write. Even he didn’t expect to write it. After the publication of What Happened at Vatican II (2008) and Trent: What Happened at the Council? (2013), friends urged him to complete the trilogy with a book on Vatican I. He “swore a mighty oath” never to do such a thing. Nevertheless, we now have the trilogy, and those far-sighted friends are the first to be thanked in the book’s acknowledgments.

The First Vatican Council lasted only about seven months. It opened on December 8, 1869, the same date on which an embattled Pope Pius IX defined the Immaculate Conception in 1854, and then, ten years later, issued the Syllabus of Errors. The Syllabus notoriously condemned “progress, Liberalism, and modern civilization.” Formally, Vatican I did not end until 1960, when Pope John XXIII made clear that the council he had called would be the Second Vatican Council. Rather, Vatican I was suspended in 1870 because of the Franco-Prussian War and the Italian takeover of papal Rome.

O’Malley’s new work, now the best available in English on Vatican I, devotes only the last two of its five chapters to the council itself. Though initially presented with a lengthy schema on the church in a post-revolutionary Europe, the council produced only two brief documents: Dei filius, on knowing God in an unbelieving age, and Pastor aeternus, on papal primacy and infallibility.

With papal infallibility at its heart, the ultramontane or pope-centered movement swept through the nineteenth-century church. It rose, not principally from Rome, but from the ground up, a movement of lower clergy and lay people. Ultramontane champions included many converts, driven to the church seeking shelter from Europe’s revolutionary storms. Prominent among them were jurist Joseph de Maistre whose 1819 Du Pape, reprinted throughout the nineteenth century, became the charter of ultramontanism, and Louis Veuillot, editor of the staunchly pro-papal mass-circulation newspaper L’Univers. With the rise of ultramontanism, European Catholics had undergone “one of the most remarkable changes in social consciousness in modern history.” The definition of papal infallibility gave institutional expression to this change and “profoundly affected how the church thought of itself and how it functioned.” Being a Catholic felt different now; it was more hierarchical, more Roman-centered, and more disciplined.

To grasp the magnitude of this change, consider the papacy after the 1648 Peace of Westphalia. Students often find it difficult to name one pope between Leo X in the 1500s and Pius IX. Sovereigns of Catholic confessional states such as France, Spain, and Austria would not have tolerated powerful medieval papal figures like Gregory VII or Innocent III. As English historian Owen Chadwick put it, “In a good-humored age, mostly good-humored men led the Roman Catholic Church.”

In 1773 Catholic sovereigns forced one of those men, Pope Clement XIV, to suppress the Jesuits. Before 1773 numerous Catholic states had already expelled them. A living sign of the transnational character of the church, Jesuits crossed national boundaries with impunity, often beyond the control of particular monarchs. In 1797, when Pope Pius VI refused to abdicate as sovereign of the Papal States, Napoleon declared him deposed and took him off as a prisoner to France, where he died in 1799. The French recorded his death as that of “Citizen Braschi, Occupation pontiff.” The papacy had hit bottom. How do we get from 1799 to 1870, from a pope who dies a prisoner to a pope widely and solemnly celebrated as infallible?

After 1648, something like Christendom existed only in fractured form. The French Revolution, and especially the Civil Constitution of 1790, marked the definitive end to the world in which confessional states made sense. If the law recognized only the state and individual citizens, where did the church fit in? At best, as in the Napoleonic Concordat, it existed at the state’s good pleasure.

O’Malley charts the rise of this popular movement, describing the end of the nineteenth century’s second decade as “The Turning Point.” The revolutionary state’s suppression and expulsion of religious orders and the confiscation of church property left many French Catholics “with strong feelings of alienation, a profound sense of loss.” Into this religious battlefield, De Maistre inserted Du Pape in 1819, a stirring defense of the alliance between crown and altar. A Romantic religious revival was clearly underway. Ironically, the power of the modern press ensured that the exaltation of papal authority quickly spread throughout Europe. As the century progressed, in a chillingly familiar scenario, editors of ultramontane organs such as L’Univers or Civiltà cattolica became arbiters of who “counted as real Catholics,” impugning the orthodoxy of bishops who dared to defend their roles as successors of the apostles and heads of local churches.

Being a Catholic felt different now; it was more hierarchical, more Roman-centered, and more disciplined
sharetweet

By the middle of the century, Pius IX was beset on all sides. For the emerging non-confessional states, his temporal sovereignty was a particular sticking point. In 1849 the Italian Constitutional Assembly stripped him of power over the Papal States. Having earlier been driven from the papal palace to the Vatican, he responded aggressively and authoritatively. He followed the definition of the Immaculate Conception, which foreshadowed Pastor aeternus, with the Syllabus and then the convocation of the council. The council’s agenda, preliminary documents, and procedures all came from the Vatican. In the months preceding the council, a “war in print” broke out. Writing under the pseudonym Janus, Ignaz von Döllinger raised profound historical objections to any declaration of papal infallibility in his book The Pope and the Council. Even though a declaration of papal infallibility did not appear on the council’s agenda, this guerre de brochure assured that it was on every bishop’s mind. In the fall of 1869, more than seven hundred bishops arrived in Rome from all over the world for the first council in more than three hundred years and the largest ever to that point. Along with fear and uncertainty about the Kingdom of Italy and the impending war between France and Germany, the “great question” hung like a dark cloud over their heads. On February 9, the bishops voted to include infallibility in the schema on the church. Discussion did not include debate, but only continuous speeches. Of the more than seven hundred bishops present, the declaration’s opponents counted at most 160.

In the meantime, the bishops worked on Dei filius. O’Malley acknowledges Dei filius’s laudable attempt to save the possibility of our knowledge of God in a world increasingly shaped by scientific progress and philosophical rationalism, but focuses on the document’s failure to grapple with historical knowledge and thinking, especially as it concerned Scripture and church doctrine.

O’Malley’s account of the debate over infallibility is masterful. Through judicious quotations, he brings the chief antagonists to life.  Among many others, we meet the mercurial Pio Nono, Archbishops Henry Edward Manning and Victor Deschamps from the majority, and Bishops Félix Dupanloup and Josip Juraj Strossmayer from the minority. The descriptions of the council’s setting and procedure convey a feel for what the bishops experienced there. To study Vatican I is to be continually edified by the courage and integrity of many of the minority bishops, who struggled, without creating a schism or being disloyal to the pope, to fulfill conscientiously their sacred office as teachers and judges of the faith.

The late Margaret O’Gara captured their achievement in her 1988 study of the French minority, Triumph in Defeat. The minority successfully minimized extreme claims to a separate and personal infallible papal magisterium, and clarified the scope and conditions of the declaration. The Curia’s reception of their qualified submissions, as well as responses by the German bishops to Chancellor Otto von Bismarck’s objections and John Henry Newman’s letter to Prime Minister William Gladstone, helped prevent absolutist interpretations of the declaration. The question of the pope’s relation to the bishops as teachers and the authority of the bishops in council remained to be clarified, but not completely resolved, by Vatican II’s Lumen gentium. For O’Malley, Vatican II is “so far, the most important and authoritative moment in the history of the reception of Vatican Council I.” Nevertheless, despite Vatican II’s retrieval of episcopal collegiality, the church has no constitutional provision for a possible disagreement between the pope and the sensus fidei as expressed by the bishops.

This leaves us with O’Malley’s question: “In what ways and to what extent is the Catholic Church ultramontane today?” Though O’Malley never mentions him, Pope Francis comes immediately to mind. In many ways, he is an ultramontane figure of towering proportions, the symbolic heart of the Catholic Church. At the same time, he is attempting to use his authority to decentralize church governance, reinvigorate episcopal collegiality with “total synodality,” and maybe even include lay people somehow in the church’s decision-making. This paradox is the legacy of ultramontanism.

Vatican I: The Council and the Making of the Ultramontane Church
John W. O’Malley
Harvard University Press, $24.95, 320 pp.