Catholics & the Conversation on Race 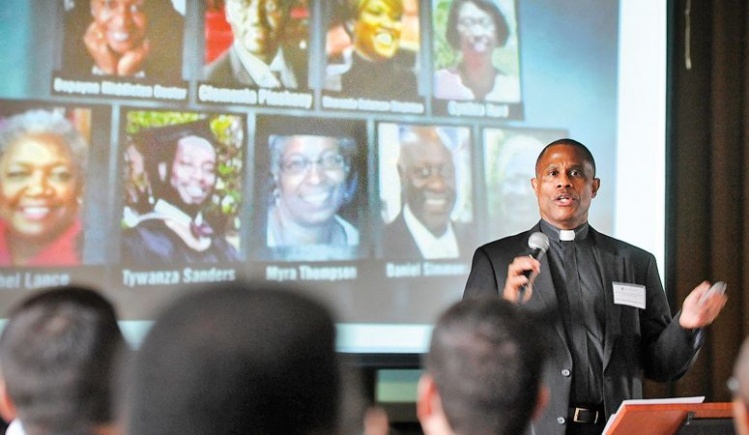 I recently visited the National Museum of African American History and Culture in Washington. For a century the project remained a dream deferred, until U.S. Rep. John Lewis of Georgia, the civil-rights hero brutally beaten during the “Bloody Sunday” march in Selma in 1965, picked up the torch and worked fifteen years trying to convince Congress to back it. The doors opened three months ago, and walking through them you encounter the evil of slavery, the cowardice and courage of religious leaders, and the power of moral movements to shape a history still being written.

The historic election of our first African-American president seemed to reflect the hopes of an increasingly diverse nation where multiculturalism was on the rise. Eight years later, we know Barack Obama’s presidency also stirred up old grievances and heightened new anxieties among whites who fear the waning of their power and cultural dominance. Trump effectively tapped into these forces. The politics of resentment and white backlash, a persistent undercurrent in U.S. history, bubbled to the surface.

What story will historians tell about race in a post-Obama era? And will Catholics play a role in drafting the next chapter?

As I’ve argued elsewhere, religious progressives can do a better job getting out of our ideological echo chambers and listening to fellow Christians who supported Trump. Sixty percent of white Catholics voted for him. Not all are racists, and not all have joined an “alt right” movement. Many voted for a self-professed outsider they hope will shake up the system and take on entrenched elites in both parties, while others couldn’t vote for Clinton because of her position on abortion. But lay Catholics and church leaders have a moral obligation to confront the reality that Trump’s victory comes with a dark populism that is dangerous. His election has been celebrated by white supremacists, led to a surge in hate crimes, and left racial and religious minorities feeling targeted.

Archbishop Wilton Gregory of Atlanta, who leads a task force on race convened by the U.S. Conference of Catholic Bishops, wrote a strongly worded reflection in his diocesan newspaper earlier this month that should help prompt sober conversation. He describes racism as a “grave moral disease whose recurrence, aggressiveness and persistence should frighten every one of us.”

The venom of and the reaction to our recent presidential election have caused many to believe that whatever progress we thought we’d made was only illusory. The recent rash of killings of men of color by law enforcement personnel and citizen vigilantes is a reminder of the blatantly racist lynchings and bombings of the last century that went unsolved and too often unnoticed. The disease of racism has clearly not been cured in our nation and in far too many other places on the globe. Whenever one can play on the fears of some people and depend upon the ignorance of others, racism flourishes. As a political strategy, such taunting may win votes, but it destroys national unity and our future.

The USCCB is in the initial development phase of a pastoral letter on race. It’s long overdue. The last major statement on the issue, “Brothers and Sisters to Us,” was issued in 1979, a decade after the assassination of Martin Luther King Jr. While the timeline on the proposed pastoral letter—it’s part of the conference’s 2017-2020 strategic plan—feels bureaucratically sluggish, Archbishop Gregory has underscored the need to “identify opportunities for a shorter term statement on these issues, particularly in the context of the post-election uncertainty and disaffection.”

MT Dávila, an associate professor of Christian ethics at Andover Newton Theological School in Massachusetts, is among several theologians and others tapped by the bishops’ conference for consultation. Dávila said it’s both an “opportune and complicated time” for the bishops to speak out. “Race has been understandably politicized but that makes it hard for people of faith who want to have a deeper conversation about what it means theologically and historically,” she said. “This has to be a process of self-examination and not just pointing fingers.” Racism should be framed as a pro-life issue, Dávila argues. “To be a black child in Chicago right now is life threatening. You have life expectancies reduced because of racial disparities in health and violence. So when someone is waking up and can’t assume they will make it to the end of the day and have bodily and mental integrity that’s a life issue.” Even after the bishops release the pastoral letter on race, Dávila worries that many Catholic clergy will not be prepared or in some cases will be resistant to difficult conversations. “Clergy usually don’t preach about structural injustice,” she said. “We flinch at those discussions.”

Archbishop Gregory’s recent commentary, Dávila thinks, is a welcome start but doesn’t go far enough. “Viewing sin in general as a disease is helpful, deep in our tradition, and I think the direction Pope Francis would like us all, especially pastoral agents, to move in,” she said. “However, racism as ‘sin’ was mentioned only once in the piece.” Personal and social sin need to be included in conversations about racial justice, she said, because they capture “the relationship between the will, personal and social brokenness, and our relationship to God and to others. When the Catholic faithful have been barraged by certain bishops about the sin of voting this way and that, I find it to be poor leadership to not address the sin of racial injustice similarly. Sin as an infection both personal and social is helpful theologically, but among faithful used to being told how they should act according to whether something damns them as cooperating with a grave evil, it’s not going to have the same weight.”

“The Church and bishops need to acknowledge how good people and institutions—including the Church—are complicit in creating systemic racism,” he said. “Otherwise, we’re left with abstract analyses that remain disconnected from living faith and our own complicity in systemic injustice. Unless the dominant role of white people and institutions is clearly addressed, the disease metaphor easily slides into the stereotyping performed by candidate Trump and fails to address the implicit assumptions so active in dominant white culture.” Mikulich adds that local activism is critical. He is involved in efforts to address racism in the criminal justice system in Louisiana, and has supported  African Americans in New Orleans whose ancestors were sold by Georgetown University in the 1830s. “How you practice solidarity with communities of color and address whiteness in your part of the country depends upon immediate local organizing by communities of color that are not necessarily the same as here in Louisiana.”

One question is whether Catholic leaders should be reaching out to leaders of Black Lives Matter. Bishop Edward Braxton, of Belleville, Ill., one of only fifteen African-American bishops (the retired included), thinks so. “In spite of the profound differences and seeming incompatibility between the teachings of the church and the Black Lives Matter movement, there may be ways in which the church and the movement might benefit from a conversation,” he wrote in America magazine.

The true intent of Black Lives Matter is a plea to all Americans to work to refashion our country so that the lives of people of color actually do matter as much as the lives of white people. It is a call to help us all live in communities in which everyone enjoys equal safety, education and employment opportunities, as well as equal political power and equal treatment by the criminal justice system. The movement also consciously embraces those who often seem to be at the margins of the black community, like African-Americans who are disabled, undocumented, homosexual, lesbian or transgender.

Braxton released a powerful pastoral letter to his diocese, “The Racial Divide in the United States,” in 2014. The letter acknowledges the difficulty of being a police officer, highlights the legitimate fear many African Americans have of law enforcement, describes the cases of six black men who died after encounters with police, and includes two descriptions of his own experiences with police. “I was simply walking down a street in an apparently all-White neighborhood,” he writes. “A police car drove up beside me and the officer asked, ‘What are you doing in this area? Do you live around here? Where is your car? You should not be wandering around neighborhoods where you do not live.’ I never told him I was a Catholic priest, but I wondered what it was I was doing to attract the attention of the officer?”

Rev. Bryan Massingale, a Fordham University theology professor and author of Racial Justice and the Catholic Church, has also described his experiences of being profiled by police officers. He points out that the church too often prioritizes “race relations” over “racial justice.” At a symposium hosted by Xavier University in New Orleans last fall, Massingale sent a clear message. “People of faith need to understand that ‘black lives matter’ is a faith issue, that it’s rooted in something as old as our belief in creation,” he said. “That if God created all of God’s children with inimitable dignity, then the church needs to be in the forefront of advancing human dignity, whenever that is threatened or whenever that is undermined.” Massingale recently wrote an essay, “Let’s Be a Church where Black Lives Matter,” in which he insisted “there is no way to speak honestly about race without making white people uncomfortable.”

The categories of “black” and “white” justify unequal access to jobs, neighborhoods, and schools. Race in America is about the rationalization of social inequality, especially white preference and dominance. That level of honest acknowledgment is something for which many are unprepared and a conversation for which this nation is ill equipped.

Patricia McGuire, president of Trinity Washington University in the nation’s capital, wants Catholic colleges like her own to be leading those conversations. A women’s college where most students are African American or Latina and receive Pell grant assistance, Trinity is a place where race is not simply an academic issue. “Catholic colleges and universities should be leaders in promoting racial justice not only for students on our own campuses but throughout society,” McGuire said. “The care and concern for human life and the dignity of the human person that are the foundation of Catholic social teachings call us to confront racism and racial marginalization wherever it appears.”