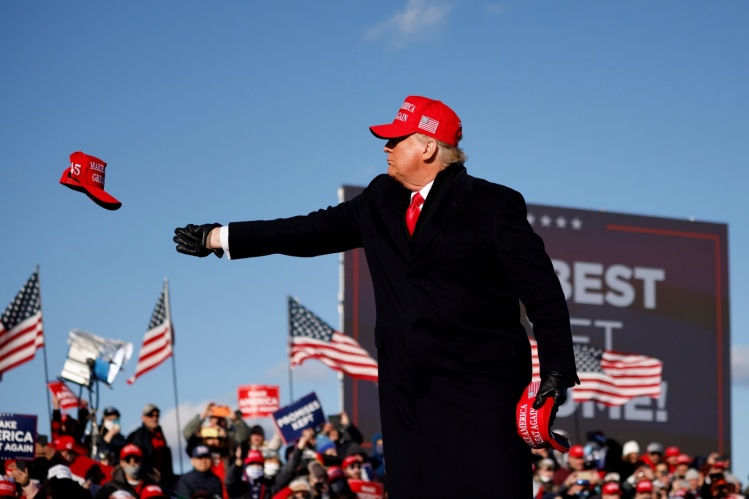 In much the same way that a charming children’s song becomes creepy if an orphan sings it in a horror movie, a quote that’s been bouncing around my head these past few months has gradually morphed from optimistic to ominous. I can’t remember where I first read it—in a book of quotations probably, or a card, or a calendar—but it’s this line from Maya Angelou: I’ve learned that people will forget what you said, people will forget what you did, but people will never forget how you made them feel.

And that, to me, is the most important thing I’ve learned about politics in all of 2020.

As someone who never liked Donald Trump, not even when he was doing cameos in ’80s movies, I’ve tried really hard to understand what someone else might like about him. From a policy perspective, I saw right-wing judges and deregulation. From a spectacle perspective, he’s a relentless entertainer, and his racism and sexism have the illicit thrill of the politically incorrect. In his 2016 campaign, he had an incisive critique of the Democratic Party’s neoliberalism, as well as a plan, it seemed, for a kind of gonzo anti-capitalism. He was ready to go after big business on behalf of the little guy.

But then he didn’t. By the time Trump ran for reelection in 2020, he had amassed a fairly typical Republican record of tax cuts and anti-labor policies along with an unusual personal record of norm-breaking, vulgarity, and crime. He was, I thought, an unpopular standard-bearer for an unpopular set of policies. Maybe that would be enough to hold onto the hard-core devoted faithful who genuinely approved of his performance in office, but that, it seemed from polls (ah, polls), was only around 42 percent of the country. All we needed to do was unite the disapprovers in favor of someone else.

What I and many other people couldn’t see was that, in addition to keeping his old fans, Trump was, like any good multilevel marketer, building his #brand. He was out there winning new ones. We’re still waiting for all the votes to be counted and I’m wary of offering a hot take that will cool poorly, but the numbers suggest that he was able to sway millions of new American voters to his side.

More than any policy, more than any idea, Trump makes people feel a way that no one else makes them feel. Powerful. Connected.
sharetweet

These were people who could see and evaluate his record of saying and doing appalling things in office over four years. They could see his catastrophic handling of a pandemic we’re still very much living through, and they could see him dismiss the seriousness of COVID-19, then get it, then dismiss it again. He had no second-term agenda, or even a party platform to run on.

Now, there are some things Trump had going for him that I will grant immediately. The pre-pandemic economic expansion helped lift many people’s standard of living; it makes sense to me that they would appreciate and remember that, and give the president credit.

But he didn’t mention the economic numbers during his rallies these past months as much as he mentioned Fox News scandals and celebrity gossip and the problems with toilets today. He didn’t have a concise or cogent critique of Biden. Was he Sleepy or Crooked? Too mean to cops or too mean to criminals?

I’m not on Facebook much, and I don’t watch swing-state TV commercials, so I have no idea if his messaging was more policy-based there. Maybe those were the ads that brought in the new voters. Maybe it was door-to-door canvassing. Maybe it was QAnon. I don’t know.

What I do know is that Trump creates a feeling. More than any policy, more than any idea, he makes people feel a way that no one else makes them feel. Powerful. Connected. In on a joke. It’s a celebration and he’s the host. It’s a revival and he’s the preacher.

What’s the second term agenda? The same agenda as when William Wallace leads the Scots into battle: watering the ground with our enemies’ tears.

People have noticed that politics doesn’t seem to have much to do with their daily lives anymore. It’s on TV and their phone, but it’s no longer at their union hall or fish fry. And so, since it seems like another form of entertainment, they have decided to engage with it primarily as an expressive outlet instead. Politics is no longer the arena in which we solve our collective problems together. It’s the forum where we go to feel our feelings with and at each other. And Trump makes everything feeling bigger.

Biden’s campaign centered around personal decency and the soul of the nation. Not bad things, certainly, but not tangible things either.
sharetweet

Sure, blame for Trump can be cast all the way back to the turn our politics took in the mid-1970s and the ’80s, back to Jimmy Carter and Ronald Reagan and the Bushes and Bill Clinton. We can blame the structural barriers that make it difficult for majorities to govern, like the filibuster, and we can blame the nationalization of elections that makes bipartisanship rare. We can blame our judiciary-dependent form of governance where even if laws get passed, they can then get un-passed.

But Democrats’ response to the menace of Trump has been, also, been about our emotional lives. Joe Biden’s campaign centered around personal decency and the soul of the nation. Not bad things, certainly, but not tangible things either. No one can eat decency. No one pays their bills with soul. Unlike Trump, Biden does have a detailed policy agenda, although if he wins without the Senate, those plans might as well be fan fiction.

Biden’s presidential campaign has focused relentlessly on the need to stop Trump, to halt the harm he is doing to the soul of our great nation. The main message of the Democratic National Convention was to vote in this election, so as to preserve democracy itself. A noble message and one I believe in, but an abstract one, nonetheless: asking voters to sacrifice on behalf of something, instead of getting something in exchange. It kind of reminded me of when movies advertise themselves as movies you should see instead of movies you’ll enjoy. “See this movie on Opening Weekend or they’ll never let a woman direct a feature again” might be true. But “See this movie because it’s awesome” is better.

I don’t know what the final results of this election will be, though it seems there is reason for guarded optimism. After Bush v. Gore, I stopped expecting any presidential election to go well for Democrats and have only been surprised twice. But I do know that feelings are a dangerous foundation for our politics. If we evaluate our politicians on promises kept or chickens in pots, we can choose those who give us what we need materially. But if all we want is to feel deeply, we’ll simply reward those who push our last button.