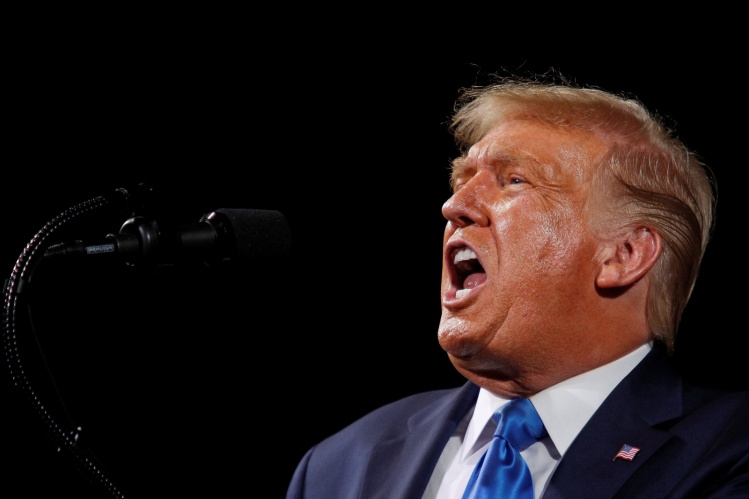 What actually motivates us to vote in presidential elections, other than a sense of duty? The answer depends on the election. Once in a while, we have the luxury of voting enthusiastically for the better of two good candidates. Sometimes—too often—the choice is between mediocre candidates with uninspiring agendas, and then we must vote, without enthusiasm but with a clear conscience, for the better mediocrity. Unfortunately, this isn’t quite one of those elections either. This year, what will matter most to voters who care about the future of our democracy and the rule of law is the candidate they will be voting against, not the one they’ll be voting for.

That’s because Donald J. Trump is uniquely unfit for the office he holds. It is not just a matter of his administration’s failed policies or its odious ideological proclivities—though we should never forget these. What sets Trump apart, and makes this election so urgently important, is the viciousness of the man himself: his malice and well-documented mendacity, his callousness and incompetence, his total lack of scruples. Trump may be only a symptom of a political disease that started before him and will likely outlast him, but sometimes you have to treat the symptom first—or else it will kill you.

It will take years, maybe decades, to undo the damage Trump has done. The sooner we get started, the better.
sharetweet

It can be hard to keep in view the full scope of this president’s failures and offenses; they have come so thick and fast, and from so many different directions. Let’s begin abroad. In pursuit of an America-first foreign policy, Trump has turned his back on our allies and befriended dictators. “It’s funny, the relationships I have [with foreign leaders], the tougher and meaner they are, the better I get along with them,” he told Bob Woodward. He has expressed envy for heads of state who get to rule for life and wondered aloud whether such an arrangement could be imported to the United States. (At his campaign rallies the chant is now “Twelve more years!”) After the crown prince of Saudi Arabia, Mohammed bin Salman, had an American-based journalist murdered and dismembered at the Saudi consulate in Istanbul, Trump boasted of protecting bin Salman from the consequences. “I saved his ass,” Trump told Woodward. “I was able to get Congress to leave him alone.” What mattered to Trump was only that Saudi Arabia buys expensive weapons from U.S. manufacturers for its war in Yemen. For this president and his administration, “America first” has always had less to do with American security or American values than with purely commercial considerations. Of course, other presidents have paid too little attention to our allies’ human-rights abuses, but Trump is the first to be openly indifferent to them. In general, cruelty does not seem to bother him, perhaps because it is a proof of power. Finally, Trump has invited foreign governments to interfere in U.S. elections and was even impeached for it—was it less than a year ago? But it says a lot about him that his impeachment may not even be one of the first things that come to mind when we remember what a disastrous president he was.

No, what will come to mind will be the thousands of migrant families he separated at the border, and the children he put in cages. It will be his unwillingness to condemn a white-supremacist rally in Charlottesville, Virginia; his habit of inciting violence against his political opponents, members of the press, and immigrants; his description of American soldiers who died on the battlefield as “suckers” and “losers,” and his disgust at the prospect of amputees appearing in military parades. We will remember that he had peaceful protesters tear-gassed to clear the way for a risible photo op; that he pulled the United States out of the Paris climate accord and opened up the Arctic National Wildlife Refuge to oil and gas drilling; that, as the leader of the free world, he seemed to spend most of his time watching Fox News and retweeting conspiracy theories. Most of all, we will remember him as the president who misled us about a pandemic that has already killed more than 200,000 Americans, because he was afraid that telling us what he knew might spook the stock market and hurt his chances of reelection. As Trump’s presidency has degenerated from farce to tragedy, it’s become clear that his apparent cluelessness was often something much worse: a complete contempt for the truth and a lack of concern for anyone but himself.

It will take years, maybe decades, to undo the damage he has done. The sooner we get started, the better. Joe Biden is a decent and thoughtful man, curious about the world and capable of empathy. He may be past his prime; his agenda may be inadequate to the scale of the many crises we face; he still seems to be harboring sentimental illusions about the willingness of a post-Trump GOP to compromise. For now, none of that matters. What matters is that he isn’t Donald Trump, already the worst president in this country’s history and an existential threat to its future.