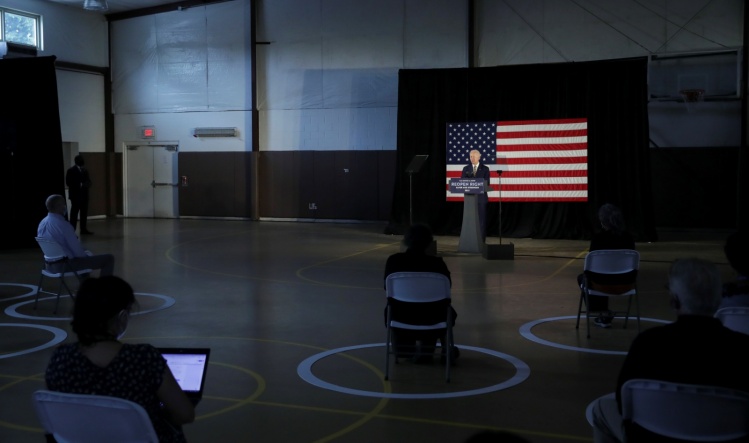 Joe Biden has been dubbed “King of the Eulogy” and the “Designated Mourner.” He’s delivered so many funeral orations that he quipped, during a remembrance for his friend Frank Lautenberg, former U.S. senator from New Jersey, “Never make a good eulogy. You’ll be asked again and again and again.”

Biden’s ability to display empathy is often traced to the family tragedies that shaped the vice president’s life: his first wife, Neilia, and their daughter, Naomi, were killed in a car crash in 1972, shortly after he was elected to the Senate, and his son Joseph “Beau” Biden III died of cancer in 2015 at the age of forty-six. Biden had a brush with death himself in 1988 when he underwent surgery for a potentially lethal brain aneurysm, and received last rites from a Catholic priest.

His style of eulogizing, both warmly personal and yet authoritative, no doubt draws from the well of his suffering. Sometimes, that’s very clear, as when he spoke at a 2011 commemoration of those killed on 9/11 aboard the hijacked airliner that crashed in Shanksville, Pennsylvania. “I say now to the families that are gathered here today, I know what it’s like to receive that call out of the blue, like a bolt out of the blue. And I know this is a bittersweet moment for you,” Biden told the victims’ relatives. “And I want to tell you, you have a lot more courage than I had. You have a lot more courage just by being here today, because I know, and many others know, how hard it is to relive these moments, because it brings everything back in stark, stark relief and stark detail.”

Less noticed is that Biden also draws deeply on his Catholic faith. His focus on common, shared suffering is recognized by many as a gift, but perhaps it is a grace as well. Its form and source, if not strictly theological, are at a minimum culturally Catholic and distinctly Irish-American. His eulogies are built on themes of redemption and forgiveness, as well as amazement at the dignity of each human being. He aims to bolster community—an important element of a good eulogy according to Cicero, who wrote that “The life of the dead is placed in the memory of the living.”

Biden’s June eulogy for George Floyd came to a soaring conclusion with his use of the Catholic hymn “On Eagle’s Wings”: “May God be with you, George Floyd, and your family. And [in] the words of a hymn from my church based on the 91st Psalm, may he ‘raise you up on eagle’s wings, bear you on the breath of dawn and make you to shine like the sun and hold you in the palm of his hand.’ God bless you all. God bless you all.”

His eulogies are built on themes of redemption and forgiveness, as well as amazement at the dignity of each human being.
sharetweet

It is hard to imagine that the same man who spoke movingly about Floyd, whose slaying by police has resulted in a nationwide protest movement against racism, also eulogized segregationists like Sen. Strom Thurmond. Biden sought to make the 2003 eulogy “a lesson in redemption,” a phrase he used in asserting that Thurmond had changed over the decades. To illustrate that, he told a story about another segregationist senator, John Stennis of Mississippi. Biden was taking over Stennis’s office space in Washington, including a mahogany table where, Stennis told him, senators from the Deep South had gathered between 1954 and 1968 and “planned the demise of the civil-rights movement.” According to Biden, Stennis said he was now glad to see the table go from an opponent of civil rights to a supporter. Biden continued: “And I was stunned. And he said, ‘One more thing, Joe,’ he said. ‘The civil-rights movement did more to free the white man than the black man.’ And I looked at him, I didn’t know what he meant. And he said in only John Stennis fashion, he said, ‘It freed my soul; it freed my soul.’”

Then he applied this to the man he was eulogizing:

Strom Thurmond’s soul is free today. His soul is free. The Bible says, “Learn to do well, seek judgment, relieve the oppressed, judge the fatherless, plead for the widow. Come now and let us reason together [saith the Lord]: though your sins may be as scarlet, they shall be as white as snow.” Strom, today there are no longer any issues to debate; there’s only peace, a patch of common ground and the many memories that you’ve left behind.

Biden’s rivals for the Democratic presidential nomination attacked him for the eulogy, and for doing business with Thurmond and other white southern senators notorious for battling civil-rights initiatives. Instead of expressing regret, Biden has defended the eulogy and his affection for Thurmond as the marks of a politician willing to talk to opponents as a necessity to passing legislation.

Likewise, Biden offered forgiveness in his eulogy for West Virginia’s longtime senator Robert Byrd, once an organizer for the Ku Klux Klan. “We know there are things he said and things he did that he came to regret. I remember talking about that the first time I visited with him,” Biden said. “He said, ‘There are things I regretted in my youth. You may know that.’ And I said, ‘None of us are absent some regrets, Senator. That’s why we enjoy and seek the grace of God.’”

One doesn’t have to doubt Biden’s sincerity as a eulogist to be aware that mourning is traditionally an important part of a politician’s job, especially in the Irish-Catholic culture in which he was raised. George Washington Plunkitt, a Tammany Hall district leader and son of Irish immigrants, gave the template in the 1905 book Plunkitt of Tammany Hall. In a chapter titled “Strenuous Life of the Tammany District Leader,” he says rival politicians competed to make the most impressive showing at wakes in their neighborhood. Of the district leader, he writes, “He will attend christenings, weddings, and funerals. He will feed the hungry and help bury the dead.” His notes on a typical day include: “Attended the funeral of an Italian as far as the ferry. Hurried back to make his appearance at the funeral of a Hebrew constituent. Went conspicuously to the front both in the Catholic church and the synagogue, and later attended the Hebrew confirmation ceremonies in the synagogue.”

Traditional as this facility with communal mourning is, the ability to express and acknowledge shared grief could not be more welcome now, as many Americans suffer a pandemic unlike any other in a century as well as a presidency notorious for ad hominem combativeness and two-hundred-eighty-character vitriol. President Donald Trump has forsaken the traditional role of consoler-in-chief; natural disaster, mass shootings, even a pandemic have failed to shake that. The New York Times noted that when he gave the eulogy for his father in New York’s Marble Collegiate Church in 1999, the future president talked mainly about himself.

Biden is, proudly, a child of the mid-century, Irish-American-Catholic world. Whatever the religious setting for Biden’s many eulogies, he tends to “speak Catholic”—and Catholics, especially politically moderate Catholics, are an important voting segment. It’s clearly his frame of reference. “My idea of self, of family, of community, of the wider world, comes straight from my religion,” Biden wrote in his book Promises to Keep. “It’s not so much the Bible, the beatitudes, the Ten Commandments, the sacraments, the prayers I learned. It’s the culture.”

Much of the Catholic parish life Biden describes is now largely gone, but its values, such as community and reverence for sacrifice, still play in the broader society
sharetweet

Much of the Catholic parish life Biden describes—neighborhood schools heavily staffed by sisters and brothers, local funerals—is now largely gone, but its values, such as community and reverence for sacrifice, still play in the broader society, and certainly left their mark on Biden. “At the time I was going to Catholic school and living in my parents’ home, there was a perfect fit between the theology of the church and the philosophy of my parents,” he told the Christian Science Monitor.

The funeral remains a big tent-pole of much of Irish culture, a great social occasion for mourners and sometimes planned by the deceased. No mere cliché: people expend great effort for a proper funeral. Mental-health professionals have acknowledged an Irish way of death, according to the widely used clinical textbook Ethnicity and Family Therapy by Monica McGoldrick. “Even those who are estranged are expected to show up at the wakes and funerals, which can be important occasions for reconciliation even after years of cutoff, which is, unfortunately, a common problem among the Irish,” McGoldrick wrote, adding that the Irish worldview accepted death as an exit from suffering, a continuation of life that should be marked with drink, music, and humor, as well as prayer.

Biden looked to his Irish heritage to find common ground with Ariel Sharon, the former Israeli general and prime minister who was often at odds with the Obama-Biden administration:

I’m reminded—my mother’s blessed memory, I’m reminded of—if you’ll forgive me—an Irish poet, an Irish writer. I’m sure Prime Minister Blair will forgive me. That Irish writer was James Joyce. And he said, ‘When I die, Dublin will be written on my heart.’ I am absolutely sure the land of Israel, the Negev is etched in Arik Sharon’s soul as it was written on Joyce’s heart.

Biden also turned to his Irish heritage to redeem Sen. George McGovern from being remembered only for his disastrous race against Richard Nixon as the Democratic presidential nominee in 1972. He may have suffered a “miserable beating” but, by pushing forward opposition to the Vietnam War, “he won the end of the war,” Biden said. He closed with: “The highest compliment an Irish Catholic can give to another man or woman literally, my Grandpop Finnegan used to say, is the compliment I’m going to pay your dad. George McGovern was a good and decent man.”

Biden says that his Irish-American mother, Jean Finnegan Biden, championed the Church, family, and both American and Irish culture. “In our view, Mom was the sole spirit and essence of what it meant to be an Irish-American mother; devoted to her Roman Catholic faith, proud of her Irish heritage, fiercely, fiercely protective of her family, deeply committed to her husband and always loyal to her friends,” Biden said in eulogizing her in 2010.

Paul Moses, a contributing writer at Commonweal, is the author of The Saint and the Sultan: The Crusades, Islam and Francis of Assisi's Mission of Peace (Doubleday) and An Unlikely Union: The Love-Hate Story of New York's Irish and Italians. Follow him on Twitter @PaulBMoses.

Michael Connor is a journalist in Florida and New York.