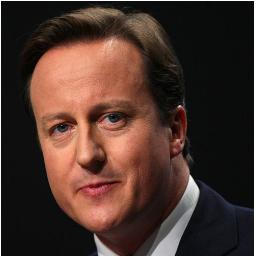 Why did British Prime Minister David Cameron's Conservative Party do so well in last night's election, despite his government's failed austerity program and despite his having come very close to presiding over the dissolution of the United Kingdom? Simon Wren-Lewis's answer is as good as any.

According to Wren-Lewis, an economist at Oxford University, Cameron has been incredibly lucky. His luck began with the fact that his party was not in power when the financial crisis hit Britain in 2008. (In this country, it was our conservative party that held the White House when the housing bubble finally burst: bad luck for the Republicans—but bad luck they deserved, since they had been the first and most enthusiastic proponents of the kind of deregulation that caused the crisis.) After Cameron became prime minister in 2010, his coalition government quickly implemented procyclical fiscal policies that kept the British economy from recovering, but he got away with blaming the lingering recession on the previous government: he said he was only making the hard choices the Labour Party had put off. As Wren-Lewis explains:

I’ve not come across a single non-City, non-partisan economist who does not concur with the view that the performance of the coalition has been pretty poor (or simply terrible), yet polls repeatedly show that people believe managing the economy is the Conservatives’ strength. This trick has been accomplished by equating the government’s budget with the household, and elevating reducing the deficit as the be all and end all of economic policy.

This allowed Cameron to pass off the impact of bad macro management in delaying the recovery as inevitable pain because they had to ‘clear up the mess’ left by their predecessor. In a recent poll a third of people blamed Labour for austerity. Yet for that story to work well, the economy had to improve towards the end of the coalition’s term in office. The coalition understood this, which was why austerity was put on hold, and everything was thrown at the economy to get a recovery, including pumping up the housing market. In the end the recovery was pretty minimal (no more than average growth), and far from secure (as the 2015Q1 growth figures showed), but it was enough for mediamacro to pretend that earlier austerity had been vindicated.

"Mediamacro" is Wren-Lewis's term for the intuitive but demonstrably false idea that government budgets work like household budgets. It ought to be the media's job to help dispel this misconception, but in the United Kingdom even more than in the United States journalists have mainly failed in this task. They have lazily, and sometimes dishonestly, reached for the macroeconomic theory that is simplest to explain rather than the slightly more difficult one that most economists accept.

Then there's Scotland. If Scottish voters had chosen independence last September—and they almost did—Cameron might have looked like one of the weakest prime ministers in modern history. Wren-Lewis writes:

The Scottish independence referendum in September last year was close. 45% of Scots voted in September to leave the UK. One of the major push factors was the Conservative led government. If Scotland had voted for independence in 2014, it would have been a disaster for Cameron: after all, the full title of his party is the Conservative and Unionist Party. That was his first piece of Scottish fortune. The second was that the referendum dealt a huge blow to Labour in Scotland. Labour are far from blameless here, and their support had been gradually declining, but there can be no doubt that the aftermath of the referendum lost them many Scottish seats, and therefore reduced their seat total in the UK.

So there you are: Cameron's a lucky man. He should savor his luck while he can, though, for there are reasons for him to worry his luck may soon change.