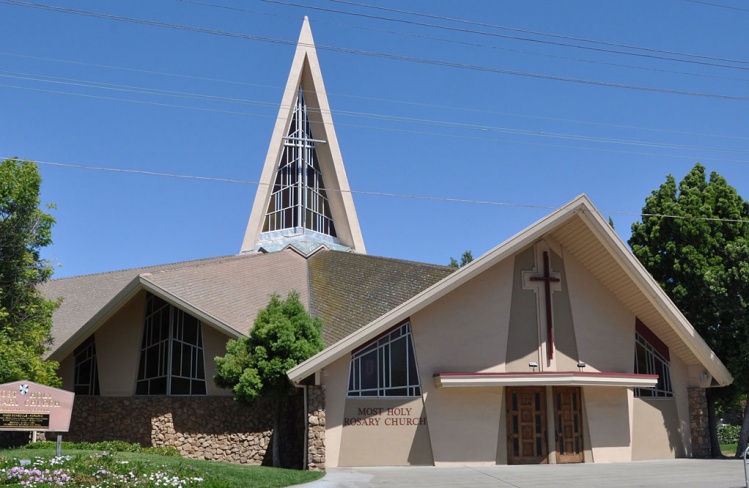 The triangular steeple of Most Holy Rosary Church rises high over its surroundings, slicing like a shark’s fin through the suburban sea of homes, apartments, and retailers that constitute the city of Antioch, California. Once the heart of a vast cattle ranch and later a community of miners, factory workers, and fisherman, Antioch now serves as a bedroom community for an increasing number of families priced out of the overheated real-estate markets of San Francisco and Oakland.

The Order of Preachers (a.k.a. the Dominicans) have been running Most Holy Rosary since the mid-1860s, when the discovery of coal and copper in the area led to a rapid expansion of the population. The current church is the third since the parish’s founding. It was completed in 1966, a year after the closing of the Second Vatican Council.

There was a flurry of church construction in the diocese in the decades following the council and most new churches followed a similar pattern: seating in the round, a high vault over the altar, and a liturgical aesthetic that was resolutely modern. At their best, these churches were well designed to facilitate the “full, conscious and active participation” in the liturgy called for by Vatican II. But many have not aged well and often resemble what the Jesuit liturgical scholar John Baldovin once described as “slightly out-of-date living rooms.”

While Holy Rosary is typical of this genre, the parish has tried to bring together both modern and traditional elements in its worship space. The church’s most striking architectural feature is a high wall of uncut stone behind the altar on which hangs a large, traditional crucifix. A similar blending of old and new can be found on the rear wall, which is also covered in stone and displays Stations of the Cross brought over from the older church built in 1905.

The Sunday 10:30 Mass is one of three English services (the parish also offers two Masses in Spanish). With teens (it is hoped) drawn to the 5:30 p.m. Life Teen Mass and middle-schoolers en route to soccer matches favoring the 8:45 a.m. option, it’s not surprising that the 10:30 attracts a quieter and slightly older crowd.

The congregation reflects the growing diversity of the region. A parish that was once home to large groups of Irish, Italian, and Portuguese immigrants now welcomes many from Mexico, the Philippines, Nigeria, and elsewhere. A glance at the children wriggling in the pews confirms that the future of Catholicism in California lies with those whose roots are in the global South.

Like many parishes in the area, the ars celebrandi at Holy Rosary sometimes draws as much from the style of Protestant megachurches as from traditional Catholic forms. The most potent example of this is the huge screens on either side of the sanctuary, on which are projected song lyrics and prayers. The use of such screens has become ubiquitous among parishes in the diocese, even those whose more traditional architecture does not easily lend itself to this kind of visual projection. The screens certainly have their detractors (among whom this author is one) who argue that they assume a worshiping community with minimal knowledge of its own prayers and distract from the action at the altar. It seems clear, however, that the arguments of those who believe the screens make the Mass more accessible have carried the day.

While Catholics have only ourselves to blame for the state of our liturgical music, it seems clear that here, too, we are learning lessons from our Protestant brethren. Most of the songs at this Mass, such as Josh Blakesley’s “Come to Jesus” and Curtis Stephan’s “Go out, Go out” follow the conventions of contemporary Evangelical “praise music,” with its emphasis on simple, repeated lyrics designed to make it easier for congregations to sing along. Among parishes in the area, such songs have migrated from the “Teen Mass” to become mainstays at other liturgies.

While Catholics have only ourselves to blame for the state of our liturgical music, it seems clear that here, too, we are learning lessons from our Protestant brethren.
sharetweet

Those who are skeptical about this kind of ecumenical borrowing would find a reassuring solidity in how the essentials of the Roman Rite are executed at Holy Rosary. Western Province Dominicans are generally not known for their liturgical experimentation and our presider at this Mass—a visiting priest from the Oakland Priory—favored an understated “say the black, do the red” approach. Both lectors, a man and a woman, were well prepared and proclaimed the readings clearly and effectively.

The homilist was a relatively young Dominican who was newly assigned to the parish in the wake of the death of a beloved older priest and former pastor, Fr. Vicente. The homily honed in on Jesus’ words in the Gospel about revealing the Father, linked this to the exemplary Christian witness of the deceased priest, and suggested that everyone in the parish—both individually and collectively through the parish’s ministries—could find ways to “reveal the Father” to others. For a parish that was still in mourning, it was an effective way for the new priest to honor his predecessor and call the community to continue his work. On another Sunday, the decision to forgo a deeper exegesis of the texts would have been a missed opportunity. In this case, however, the homily’s simplicity and brevity seemed appropriate.

The only truly discordant note in the Mass was the process for distributing the consecrated bread and wine to almost a dozen lay eucharistic ministers. Because the General Instruction of the Roman Missal (GIRM) requires that such ministers “not approach the altar before the priest has received Communion,” they gathered in a semicircle at the foot of the sanctuary, creating a somewhat distracting wall of bodies. The congregation then watched while each minister received Communion and then waited once again while the priest—the only person in the sanctuary allowed to transport the consecrated elements from the altar—placed a bowl or chalice in the hands of each minister.

To be fair, this ungainly ballet is not unique to Holy Rosary. Like the screens and the music, it can be experienced at almost any Mass in the area on Sunday. While Vatican directives aimed at defending the distinctiveness of priestly ministry have made things more awkward and time-consuming than they need to be, it is hard to imagine a dozen people crammed into a narrow space behind an altar being able to move with the gracefulness that ritual action requires.

Taken as a whole, there was nothing particularly memorable about this Mass, but nothing particularly objectionable either. If we, as a congregation, were not notably enthusiastic, we were certainly attentive and engaged. Regardless of our human failings as liturgical actors, God was present and at work. We left that morning having encountered Jesus Christ in the Eucharist and strengthened to do his work in the world. On a blistering hot Sunday in Ordinary Time, is it reasonable to ask for more?

But if the reader detects a faint whiff of despair in this author, she would not be mistaken. Many of the words I write in the summer of 2017 could have been written in 2007, 1997, or 1987. Similar concerns about the well-intentioned mediocrity of contemporary Catholic liturgy have been voiced by critics as theologically diverse as Archbishop Rembert Weakland and Pope Benedict XVI. Ideas have been generated and programs have been proposed, but we seem to be stuck in a rut. Things may not be getting much worse. But they are not getting better, and one wonders what it would take for things to improve.