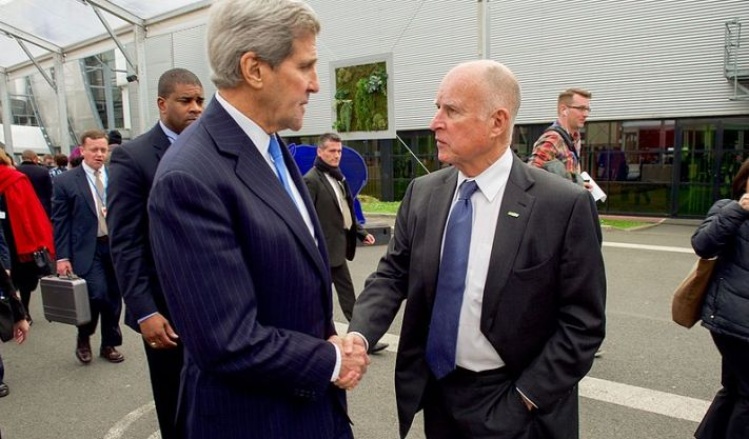 Governor Jerry Brown and the California delegation played an outsized role at the Paris climate talks.

Though California was not granted a seat at the negotiating table, Brown’s appearances and speeches garnered a great deal of publicity. This was not due merely to the Golden State’s status as the world’s seventh-largest economy, but also because of its ambitious cap-and-trade system, which has been widely praised for its success in reducing carbon emissions without sacrificing economic growth.

The environmental movement has long been criticized for its perceived neglect of social and economic injustice. As Jedediah Purdy recently argued in Dissent, environmentalism has seemed to coexist comfortably with systems of corporate power and consumerism. In spite of its best efforts, the movement remains “disproportionately white, elite, and motivated by romantic attachment to high mountains, old forests, and charismatic animals.”

California is attempting to address this problem head on. Kevin de León, state senate president pro tempore and member of California’s delegation to the Paris talks, has been outspoken about the need to “democratize” climate change policy by enacting programs that simultaneously address both carbon emissions and economic disadvantage. This was the guiding principle behind the state’s recent decision to set aside 26 percent of cap-and-trade revenue for programs benefiting low-income residents. This includes $130 million for construction of affordable housing, $75 million for weatherization of low-income homes, and $25 million for public transit in low-income communities. The state has also used cap-and-trade funds to subsidize solar panel installation for low-income households and to provide electric-car rebates for lower- and middle-income consumers.

This is a synthesis that could eventually solve a problem that has long vexed progressive politics in the United States. Political scientist Jeffrey Berry has identified a schism in American liberalism between the “materialist” concerns that once characterized liberal politics and the “post-materialist” orientation that has guided much of liberal activism since the 1970s. Where the old-fashioned liberalism forged in the New Deal-era focused on bread-and-butter issues like wages, social programs, and working conditions, the new generation of liberals turned instead to matters like women’s rights, LGBT issues, and, perhaps most significantly, the environment.

As Jacob Hacker and Paul Pierson have highlighted in Winner-Take-All Politics, an unintended consequence of liberals’ focus on the environment and other “postmaterial” issues has been a fragmentation of progressive politics and a diversion of political will away from efforts to address economic injustice. In the Reagan era, as the strength of organized labor declined and the business lobby consolidated power in Washington, liberal groups like the National Organization for Women and the Environmental Defense Fund emerged as skilled lobbyists capable of countervailing the conservative agenda and promoting social equality, consumer safety, and environmental protection. But unlike labor unions and other organized interest groups that comprised the older liberal coalition, new liberal groups rarely focused on material issues such as housing, employment, and wages.

California’s climate policies seem designed to mend the schism between materialist and postmaterialist liberals. By aligning the problem of climate change with problems of material deprivation, California is attempting to make climate change a bread-and-butter issue.

This is an approach to environmental politics that has been propagated most effectively, perhaps, by Pope Francis, whom Gov. Brown has praised for “bringing a moral and theological dimension” to the issue of climate change. At the heart of the pope’s message in Laudato si’ is an insistence on the inseparability of climate justice and economic justice and a corresponding call to “hear both the cry of the earth and the cry of the poor.”

Environmentalists eagerly embraced the pope’s encyclical for its rebuke of a worldview that has placed man at the center of creation. But if Francis condemns “anthropocentrism,” he is equally critical of what he calls “biocentrism”—a tendency to isolate our relationship with the environment from our relationship with others.

It is precisely this tendency that California’s ambitious strategy is taking strides to overcome. Brown, a former Jesuit seminarian, appears to recognize that environmentalism without justice risks becoming, in the words of Laudato si’, “nothing more than romantic individualism dressed up in ecological garb.”