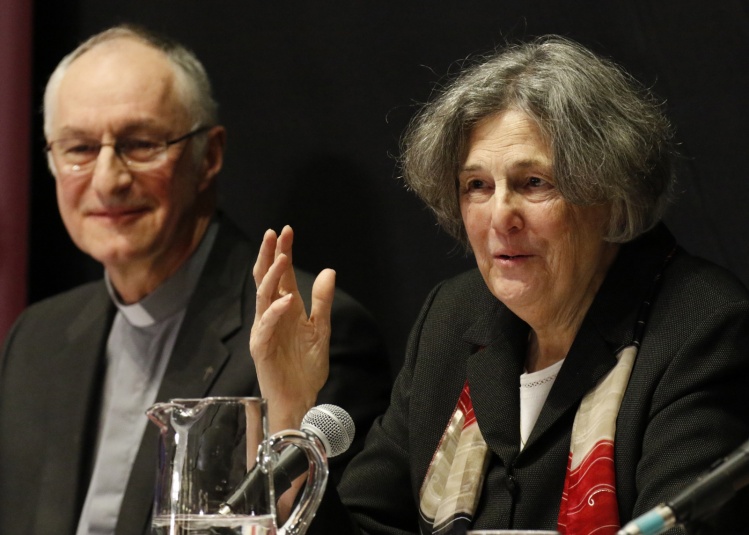 It’s been seven months since a papal commission handed in its report to Pope Francis on the history of women deacons, and the document remains another Vatican secret. But, based on the public comments of two commission members, it’s apparent that it strengthens the case that women “deaconesses” of ancient times were really ordained deacons.

If so, that would be a significant change from the findings of a 2002 study by the International Theological Commission, which advises the Vatican’s Congregation for the Doctrine of the Faith. It found that “the deaconesses mentioned in the tradition of the ancient Church—as evidenced by the rite of institution and the functions they exercised—were not purely and simply equivalent to the deacon.”

Two of the current study commission’s members, Phyllis Zagano and the Rev. Bernard Pottier, spoke during a panel discussion sponsored by Fordham University’s Center on Religion and Culture in Manhattan on January 15. (You can view the discussion on the website of Salt and Light TV.) They steered around what was actually in the commission’s report and for the most part recounted their fascinating historical research on women deacons.

The key historical question is whether women who served as deacons were simply blessed, or if they were truly ordained.
sharetweet

But in response to a question from the audience, Pottier discussed what has changed in the new report compared to previous studies of whether women were ordained deacons. “That argument that it was not so before is not sustainable anymore,” said Pottier, a Belgian Jesuit who serves on the International Theological Commission (which he said has four women among thirty members). “So I see in the opponents of the ordination of women, other arguments are coming now, about the theology of the sacrament, about the unity of the sacrament” of holy orders. That is, the argument that since only men can be ordained as priests, the “unity” of the sacrament requires that only men be ordained as deacons.

Zagano and Pottier said that this argument against women deacons fails because of a 2009 document that Pope Benedict XVI issued. Benedict modified canon law so that “the difference between the episcopate, the presbyterate and the diaconate is made clear.” Priests and deacons receive holy orders, but they are on two tracks.

The key historical question is whether women who served as deacons were simply blessed, or if they were truly ordained. Zagano, senior research associate in the religious-studies department at Hofstra University, spoke of a wealth of evidence that has been unearthed to document the role of women as ordained deacons in the Western church to the twelfth century. Manuscripts in the Vatican Library and four other European libraries, dating from the fourth to the sixteenth centuries, show that the rite of creating women deacons had “all elements of sacramental ordination,” she said, including the bishop’s laying on of hands in the presence of other priests and deacons; a stole placed on the woman’s neck; use of the epiclesis, a prayer calling down the Holy Spirit (and a key part of the sacrament); and presentation of a chalice for the newly created deacon to “self-communicate.” At the end of the ceremony, she said, the bishop called the woman a deacon. “If she wasn’t a deacon, they would call her something else,” Zagano added.

As often seems to happen under Pope Francis, even the process of determining whether to pursue a reform—in this case, to restore women to the diaconate—represents a reform of its own. In this case, the biggest change to date has been the composition of the papal commission; Zagano said the twelve-member panel was the first in church history to have equal numbers of men and women.

Pottier gave a hint at the panel’s deliberations when he said that “it was for me very interesting to see women had more consensus and…common way of thinking than men. Men: it’s very difficult to accept that the other has a good idea.” One of the male members, the Rev. Karl-Heinz Menke, had argued in a 2013 article that women did not perform the functions of a deacon. But if the women members agreed with the research that Zagano and Pottier have done, it means that a majority of the panel affirmed that women had in fact served as ordained deacons.

That would not mean, in itself, that Pope Francis is on the verge of making history by reopening the diaconate to women. But there is already a process for seeking further input through synods, which Francis has emphasized. Zagano noted two markers on the way:

The final document from the bishops’ synod on youth last year stated:

The young also clamour for greater recognition and greater valuing of women in society and in the Church. Many women play an essential part in Christian communities, but often it is hard to involve them in decision-making processes, even when these do not require specific ministerial responsibilities. The absence of the feminine voice and perspective impoverishes debate and the Church’s journey, depriving discernment of a precious contribution. The Synod recommends that everyone be made more aware of the urgency of an inevitable change, not least on the basis of anthropological and theological reflection on the reciprocity between men and women.

The preparatory document for October’s synod of bishops of the Amazon Basin considers expanding the role of women in “official ministry.” It states:

[I]t is necessary to identify the type of official ministry that can be conferred on women, taking into account the central role which women play today in the Amazonian Church. It is also necessary to foster indigenous and local-born clergy, affirming their own cultural identity and values. Finally, new ways should be considered for the People of God to have better and more frequent access to the Eucharist, the center of Christian life.

Pottier said that the panel completed its report in June. It is said to have reached Pope Francis’s desk in July. This was the month when the pope accepted the resignation of Archbishop Theodore McCarrick as a cardinal. Given the turmoil in the hierarchy that has followed—with Archbishop Carlo Maria Viganò’s allegations of a long cover-up of McCarrick’s alleged sexual abuses—it may not seem the right time for Francis to act on this.

But in truth, the sad story of how so many men in positions of power knew about and failed to stop McCarrick’s alleged abuses for so long is a very good reason to place women in ordained ministry—regardless of whether it was done before.

The Spin: House GOP's 'Preferential Option for the Poor'