Our Political Crisis Will Outlast This Presidency
By Andrew J. Bacevich
War and Peace
Donald Trump 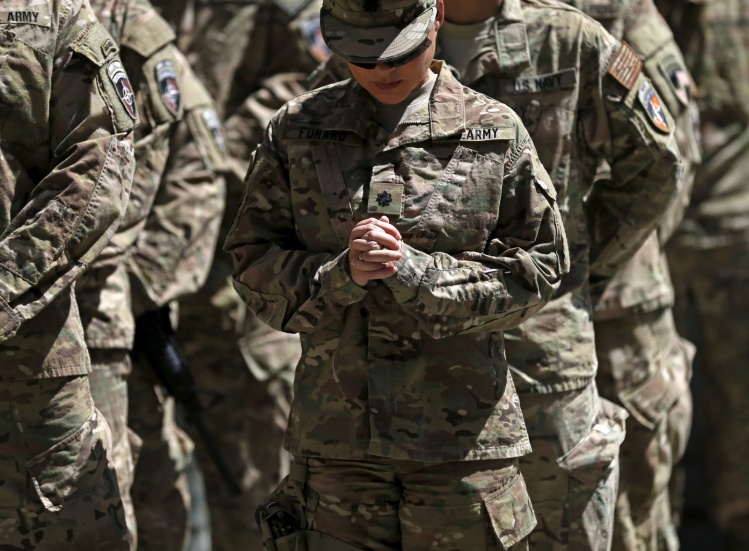 A U.S. soldier prays during a ceremony in Kabul, Afghanistan, Sept. 11, marking the 14th anniversary of the 9/11 attacks on the United States. (CNS photo/Mohammad Ismail, Reuters)

With the impeachment process hurtling toward its conclusion, the endgame has now become unmistakably clear: President Trump will retain his office. Indeed, notwithstanding the hullabaloo of gavel-to-gavel coverage and the constant media drumbeat of instant analysis, Republican control of the Senate made that outcome all but foreordained. The only question is whether Trump will emerge from this episode of political theater weakened or strengthened as he runs for reelection. Sadly, the latter seems quite likely.

Not for the first time, the American people have been played for suckers. Hearings conducted by the House Intelligence and Judiciary Committees that radio and television commentators have repeatedly described as “historic” have turned out to be banal or, worse still, largely beside the point.

Democrats charge Trump with abusing the power of his office and violating the Constitution. Republicans rebut that charge by accusing Democrats of conniving to overturn the results of the November 2016 presidential election, which they have never accepted. Both claims possess very considerable merit.

Yet the events mounted on Capitol Hill conceal this great irony. Even as they exchange volleys of acrimony and accuse each other of acting in bad faith, the two opposing sides conspire to deflect public attention from matters of far greater moment than whether holding military aid hostage to promises of political favors qualifies as an impeachable offense.

Observers of the House impeachment inquiry blessed with patience and a sufficiently strong stomach have been treated to ringing testimonials in favor of democracy and the rule of law, coming from members of both parties. Do House Democrats genuinely believe that allowing Trump to remain in office until the next election, now just eleven months away, poses a risk to the basic political order? Do House Republicans genuinely believe that Trump’s accusers are engaged in a witch hunt conjured up out of nothing but pure spite? Who knows? Motives are not easily discerned, especially among politicians preoccupied with their own survival.

There will be no emerging from this crisis until Congress summons up the courage and integrity to live up to its responsibilities.
sharetweet

Yet this much we can definitively say: members of Congress themselves, individually and collectively, have failed to perform their duties on matters of far greater moment than whether or not to ship U.S. weapons to Ukraine. In that sense, the impeachment hearings amount to little more than a head fake. Whether by design or incidentally, they divert attention from far more serious issues—crimes, even—in which Congress itself has been complicit.

Were there any doubts on that score, “The Afghanistan Papers,” recently released by the Washington Post, remove them once and for all. Prepared under the aegis of the Special Inspector General for Afghanistan Reconstruction, this trove of documents reveals the immensity of the incompetence, dishonesty, and corruption that have pervaded the U.S. war effort in Afghanistan since it began more than eighteen years ago. By extension, the documents reveal the grotesque failure of Congress to provide even minimally adequate oversight of the longest war in U.S. history.

More broadly, legislators have allowed this president and his several predecessors to exercise essentially unlimited latitude in conducting war, thereby gutting key provisions of Article 1, Section 8 of the very Constitution that has been the subject of endless ostensibly heartfelt tributes in recent weeks. The damage done to U.S. interests and the human and monetary losses sustained by the nation as a whole are incalculable. Together, in my view, they dwarf the sins that Trump committed in his cockamamie scheme regarding Ukraine.

And when you’ve finished toting up the harm caused by the misguided and mismanaged war in Afghanistan, take a breather and turn to Iraq, Libya, Yemen, and Syria—further examples of Congressional complicity in foreign policy disasters.

I have no doubt that historians will judge harshly the House and Senate Republicans who kowtow to Trump, whether because they fear the president’s wrath or that of his followers or because they take seriously his bogus promises to “Make America Great Again.” They are either knaves or fools.

Yet historians are unlikely to judge much more favorably those Democrats who act as if removing Trump from the scene will restore American politics to a state of pristine purity. Our president may well be corrupt, but corruption pervaded the political scene long before he took his famous ride down the escalator at Trump Tower.

Furthermore, the principal sources of corruption are well known. They include cynical gerrymandering, the corrosive influence of corporate lucre and special interests, and the whole dialing-for-dollars racket to which members of Congress are obliged to submit if they want to stay in the good graces of party leaders. And anyone who thinks that Moscow’s intrusion into American politics in 2016 represents something unique has not been paying attention to the machinations of the Israel lobby and the lubricating impact of oil money flooding Washington from Saudi Arabia and other Gulf states.

Trump is a crude, ignorant, and incompetent lout. But let us not kid ourselves about the breadth and depth of the political crisis enveloping the nation. There will be no emerging from this crisis until Congress summons up the courage and integrity to live up to its responsibilities. Physician, heal thyself.