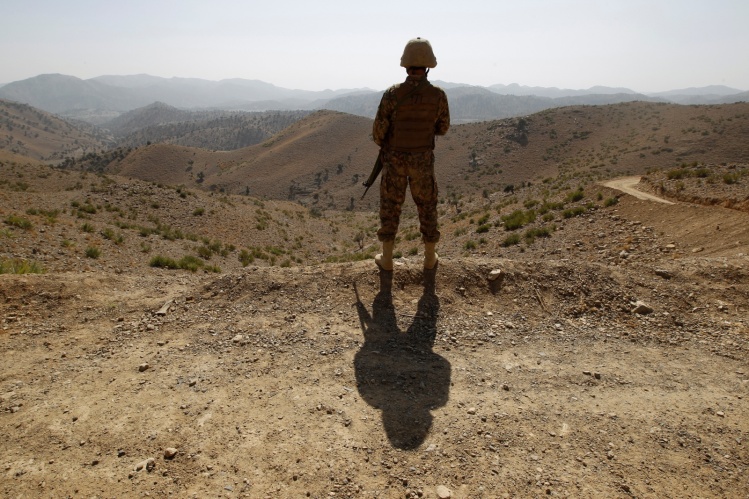 The Washington Post’s “Afghanistan Papers” story was disheartening and in many ways infuriating, but it was not shocking or even surprising. The grim facts are familiar. Eighteen years of war, 2,300 U.S. troops killed and 20,000 wounded. The Afghans, of course, have suffered even more. There has been little prospect of “victory” since the initial defeat of Al Qaeda and its Taliban allies in 2002. That military operation was justified by the attacks of 9/11, but the ongoing occupation of Afghanistan was unnecessary and insupportable, especially after George W. Bush launched the calamitous invasion of Iraq.

More than $1 trillion has been spent, and at present the resurgent Taliban controls or contests most of the country. Efforts to recruit and train army and police forces loyal to the Kabul government and effective in the field have largely failed. It has been clear for more than a decade that the “mission” in Afghanistan, as far as the U.S. military and presidential administrations of both parties were concerned, was not to win but rather to avoid being blamed for losing. Truth, it is often said, is the first casualty of war. But by any measure, eighteen years of futility and lies are an indictment not just of the U.S. military, but of American politicians and a complacent American public as well. Fool us once, shame on you. Fool us eighteen times…

According to the Post, the Special Inspector General for Afghanistan Reconstruction has been interviewing U.S. military officers and civilian officials about the progress of the war since 2008. In public, the military and both the Bush and Obama administrations claimed the battle against the Taliban, reconstruction of the country, and the viability of Kabul’s government were all making headway. In private, they reported a very different story. As early as 2003, Secretary of Defense Donald Rumsfeld complained he had no idea who the enemy was in Afghanistan. Douglas Lute, a retired three-star Army general, advised both the Bush and Obama administrations. “We were devoid of a fundamental understanding of Afghanistan—we didn’t know what we were doing,” he told the special inspector general in 2015. “We didn’t have the foggiest notion of what we were undertaking.”

It is too easy to support a war you or your children don’t have to fight.
sharetweet

Lute’s remarks reminded me of a passage in novelist Paul Theroux’s classic travel book, The Great Railway Bazaar: By Train Through Asia. Theroux is notorious for his unvarnished depictions of cultures in the developing world. “Afghanistan is a nuisance,” he writes of his visit there in 1974. “Formerly it was cheap and barbarous, and people went there to buy lumps of hashish—they would spend weeks in the filthy hotels of Herat and Kabul, staying high. But there was a military coup in 1973, and the king (who was sunning himself in Italy) was deposed. Now Afghanistan is expensive but just as barbarous as before.”

Needless to say, not all Afghans are barbarous, then or now, and there is much more to this country’s rich history than coups and hashish, but Theroux’s unblinking (and very Western) observations help make sense of Lute’s assessment that “we were devoid of a fundamental understanding of Afghanistan—we didn’t know what we were doing.” And, yes, Afghanistan remains a haven for drug dealing. Eighty percent of the world’s heroin is now produced there.

One of the more galling aspects of these revelations is how some members of Congress have reacted to the Post’s story. Congress, of course, long had access to the special inspector’s reports, yet members of both parties have expressed shock at how the public was misled. As Andrew Bacevich writes in the Atlantic, “Congress offered negligible oversight, finding perpetuating the war more convenient than ending it.”

Why have presidents, Congress, and the American people allowed this charade to go on for so long? It is hard to avoid the fact that most Americans remain untouched by the costs of the war. Only a small percentage of citizens serve in the military, while the war has been paid for with borrowed money. The government has already paid $500 billion in interest on those loans, according to the New York Times. In the meantime, in rare if dubious acts of bipartisanship, Congress continues to borrow massive amounts of money for its Pentagon budget. No one, it seems, pays a political price for voting for endless military spending as long as taxpayers never see the actual bills. Thanks to steep jumps in the Pentagon’s budget under President Trump, the nation now spends more than $700 billion each year on the military. The House just passed a defense budget that includes millions for a “Space Force,” another of Trump’s vanity projects.

It is hard to resist the conclusion that Americans made a pact with the devil when we dispensed with conscription in favor of an all-volunteer military. If young men and women were being drafted to fight in Afghanistan, there is not the slightest possibility the war would have dragged on for eighteen years. Protests in the streets and in the voting booth would have forced the hand of any president who refused to end a futile war because he was afraid of being accused of losing it. No one relishes the idea of their son or daughter being drafted, and it would be just and necessary to allow draftees to seek alternative service if they objected to a particular war on moral grounds. But the history of the past four decades of U.S. military overreach warrants resurrecting some more direct democratic curb on the nation’s war-making abilities. It is too easy to support a war you or your children don’t have to fight.