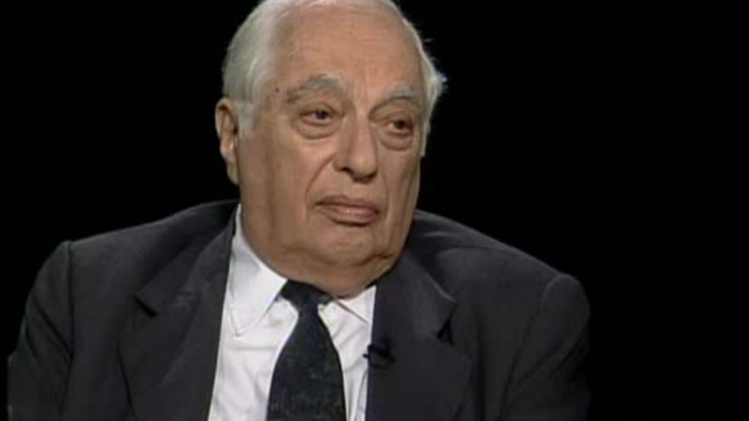 Bernard Lewis on Charlie Rose in 2004

It wasn’t exactly summer reading, but it was remaindered, only $5.98! Notes on a Century: Reflections of a Middle East Historian would finally clarify the role of its author in the Middle East and U.S. policy. I snapped it up.

The author, Bernard Lewis (now 101 years old) has seen and said a lot. A renowned scholar and historian, he is an expert on Islam, the Ottoman Empire, and Turkey. He has been a counselor to presidents and policymakers, a frequenter of officialdom in Turkey, Egypt, Iran, Saudi Arabia, Libya, and Israel. Lewis has long been in my Caveat Lector file—read with robust skepticism. He was, I long thought, part of the neoconservative intellectual machinations that entangled the United States in the Middle East, especially the disastrous 2003 invasion of Iraq.

Part memoir, part apologia, Notes on a Century reveals Lewis as a raconteur and devoted teacher, first at University College, London, and then at Princeton. Born in 1916 and raised in London, he landed in an MI6 intelligence unit during World War II, thanks to his aptitude for languages. After the war, that aptitude plus his experience and knowledge of Turkish history launched him on a career as scholar, adviser, and authority on Islam. (No further mention of MI6.) He sees himself as an honest friend of Middle East harmony, a disinterested expert in a divided world.

Were my suspicions unfair? Was Lewis misfiled under Caveat Lector? When experts and scholars begin advising governments, do they distinguish their expertise from their politics? Lewis seemed not to, at least in Notes.

I turned to other of his many books (not remaindered): What Went Wrong? and The Crisis of Islam, dating from just before and after 9/11, and From Babel to Dragomans, a collection of essays spanning many decades. Over time, Lewis had obviously changed his mind, contradicted himself, and drawn weighty conclusions from large generalizations.

Lewis had obviously changed his mind, contradicted himself, and drawn weighty conclusions from large generalizations.
sharetweet

Consider the fighting phrase, “the clash of civilizations.” Lewis coined it in a 1990 speech describing the struggle between Islam and the West, stressing the dysfunctions of Islam. “In the Middle East, as elsewhere in the world, it is always much easier to blame others for what goes wrong than to accept responsibility oneself. So much has gone wrong—and who else is there to blame? The British and French empires have long since departed....” He later disclaimed the phrase, but not the thought. In 1996 when Samuel Huntington adopted it for a book title, it raised the decibel level of the debate over Islam.

By then, the first Bush administration had already waged the First Gulf War in response to Saddam Hussein’s invasion of Kuwait. As war plans jelled in 1990, Lewis passed on to Dick Cheney, then secretary of defense, the prediction of his friend, Turkish President Tugut Ozal: the war “will be quick, cheap, and easy.” Indeed it was quick: after seven days, the Iraqi army fled Kuwait. It may have been too quick for Lewis, who argues that the coalition should have gone on to overthrow Saddam. Cheney, it seems, agreed.

But Lewis says he opposed the 2003 invasion that did overthrow Saddam. He reports (or perhaps brags) that after 9/11 he was invited by Cheney to talk about the Middle East and Islam with a “receptive audience…not to offer policy suggestions but to provide background,” and that he had a private “wide-ranging conversation” with Condoleezza Rice. A Wall Street Journal (September 27, 2002) essay, “A Time for Toppling,” could be a version of Lewis’s “backgrounder”: “A regime change may well be dangerous, but sometimes the dangers of inaction are greater than those of action.” Did the dangers of action in this case prove greater? He doesn’t say.

What to make of Lewis? Over the twentieth century, he was a witness to the growing chaos of the Middle East, some of it created by his own British government. As the mantle of empire slipped from British shoulders, did his eyes turn to the next likely overseer? As he took up residence at Princeton in 1974, did he imagine passing on the shabby mantle of empire to the United States? Far-fetched perhaps, but fourteen years after 2003, the U.S. remains in Iraq. Perhaps the renowned scholar and expert, having overlooked the failures of the first empire, did not foresee the failures of a second. Caveat Lector!