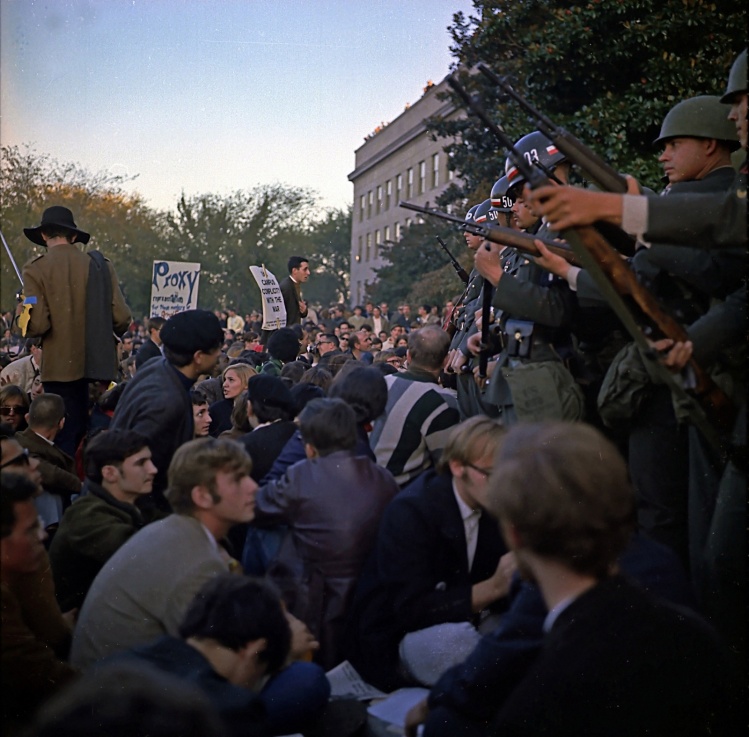 In November of 1969, when I was a freshman in college, I took part in the largest anti-war protest in U.S. history. Half a million of us crowded the Mall and the streets in Washington D.C. The crowd was mostly college students, but not exclusively. Parents of a friend of mine marched with us. We were certainly right about the ongoing calamity of the war in Vietnam. But being right often doesn’t change anything. Looking back at that “historic moment,” the immediate result of that astonishing outpouring of grief and anger was the expansion of the war and, just three years later, Nixon’s re-election landslide.

In May 1970, Nixon heedlessly expanded the war into Cambodia. College students across the country protested, sometimes violently. After an ROTC building was burned down at Kent State University in Ohio, the National Guard was deployed on campus. Facing demonstrators the next day, the Guard troops opened fire, killing four students. Two black students at Jackson State University were later killed by the Mississippi state police after protests there. Those killings galvanized many college students, and a nationwide student strike closed colleges and universities, including my own. Classes were suspended and the few weeks that remained in our academic year were spent attending strike meetings, debating the strike demands, and organizing further protests. We were all excused from final exams and/or papers, allowing me to escape from my course on the German novel without having to finish reading The Magic Mountain. I’m chagrined to confess that is an assignment I have yet to complete.

Much of the rhetoric of the strike was focused not on Vietnam, but on racism. The organizers of the nationwide movement announced that the first of their three strike demands was to “end the systematic repression of political dissidents and release all political prisoners, such as Bobby Seale and other members of the Black Panther Party.” The other demands were that the United States “unilaterally and immediately withdraw all forces from Southeast Asia,” and that colleges and universities end their “complicity with the U.S. war Machine.” Needless to say, none of these demands were met, and most of us returned to school in the fall with a deepening sense that the nation was determined to stay the course both in Vietnam and at home, a disastrous path that culminated in Watergate, Nixon’s resignation in 1974, and humiliation in Vietnam.

One of the principal strike leaders at my college was a former child TV actor named Stephen Talbot. Talbot had played the role of Gilbert Bates, a friend of Theodore “Beaver” Cleaver on the hugely popular TV sitcom Leave It to Beaver. I’m not making this up. Talbot went on to a long and distinguished career as a journalist and documentarian, best known perhaps for his work on PBS’s Frontline. As the Beaver’s neighborhood companion, Gilbert was responsible for giving his friend mischievously bad advice that often got the innocent Beaver in trouble. “Gee, Beave, I don’t know,” was how Gilbert would always try to squirm out of responsibility for his impish actions.

Robin Hood’s adventures can get you only so far.
sharetweet

Talbot was an ardent advocate for the strike and an articulate opponent of the war in Vietnam. This was no abstract cause for those graduating from college and possibly losing draft-deferment status. If memory serves, Talbot pleaded passionately for doubtful students to embrace the strike’s unrealistic demands. One of my favorite memories from those heady days is of sitting with hundreds of other students on the lawn outside our College Row of buildings as we listened to Talbot speak. Suddenly there was commotion behind us, and then a wave of laughter went through the crowd. Turning around, I could see a large white banner had been unfurled from the second-story window of a fraternity house. On it were painted the words, “Gee, Beave, I don’t know.” It was a welcome moment of humor and skepticism in what was too often a time of seductive political conformity.

Richard Wilbur, the Pulitzer and National Book Award winner, was the college’s poet-in-residence at the time. Like his poetry, Wilbur was a formal and seemingly unassuming presence, rightly held in awe by many on campus. I never studied with him, and only much later came to know and love his poetry. But I did once spend an evening in his company, when he and a few members of the English department gathered with a few students to watch the celebrated 1938 film version of The Adventures of Robin Hood, starring Errol Flynn and Olivia de Havilland. The host also taught film and had a projector and a portable movie screen in his house. Wilbur seemed to enjoy the film, but hardly said a word. Thirty years later I wrote to him, casually mentioning that pleasant evening and inviting him to submit a poem to Commonweal. With his customary graciousness, he wrote back that he did not see Commonweal regularly, but had always held it in much esteem. He did not have any poems that were not spoken for at that moment, but hoped to send me “a poem ere long.” Alas, that never happened. Robin Hood’s adventures can get you only so far.

Wilbur died in 2017, and it was from reading obituaries that I learned he had initially aspired to be a journalist and had been quite a lefty in his youth. He had seen a good deal of combat as an infantryman in Europe in World War II. Remarking on the impact the horrors of war had on him, he said: “One does not use poetry for its major purposes, as a means to organize oneself and the world, until one’s world somehow gets out of hand.” It was his war experience that compelled him to “versify in earnest.” How humbling that conviction is for those of us who have never borne the burdens Wilbur took on as a young man.

One day during the student strike, Wilbur took to the makeshift stage on the lawn where Talbot had so often held forth, and read a short poem he had written for the occasion. It’s titled “For the Student Strikers.” The poem begins, “Go talk to those who are rumored to be unlike you, / And whom, it is said, you are so unlike.” The second stanza opens with a plea, “It is not yet time for the rock, the bullet, the blunt / Slogan that fuddles the mind toward force.” In fact, the whole poem is a plea for reconciliation between the protesters and those determined to thwart them. “They are your houses; the people are not unlike you; / Talk with them, then, and let it be done / Even for the grey wife of your nightmare sheriff / And the guardsman’s son.”

As Wilbur and Martin Luther King Jr. both knew—King had visited the campus a few years earlier—protests get you only so far. To get further, you need to talk to, and persuade, “those rumored to be unlike you.” Poetry helps.

Custody of the Ears