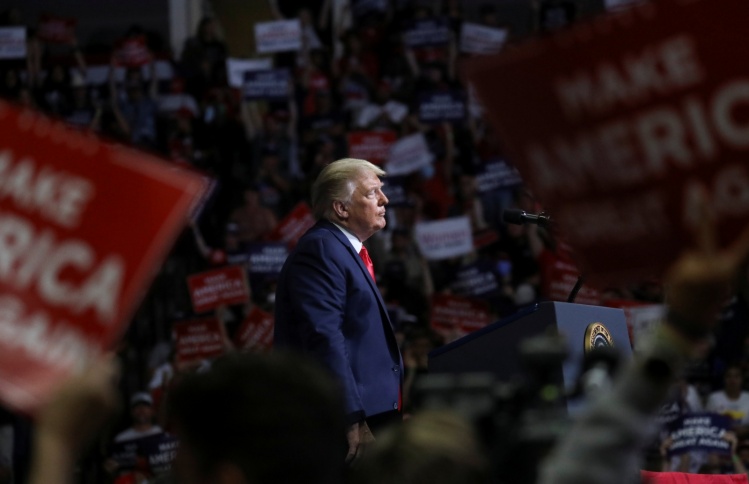 Gratifying as it can be to see a braggart brought low, it’s best to note Donald Trump’s whimper of a rally in Tulsa and sliding poll numbers with only the passing mention they deserve. Keep the focus instead on his malfeasance and corruption and what it means for the American people.

Let’s start with the immediate crisis. The carnage about which Trump bellowed in his 2017 inaugural address is nothing compared to what has actually come to pass with the deaths of more than 125,000 Americans from COVID-19 since March. In all but decreeing there will be no federal role in fighting a pandemic that has ravaged the economy and will have long-term negative effects on almost every aspect of American life, Trump has abdicated his responsibilities as chief executive. He has MAGA’d us so thoroughly that instead of flattening the curve the country now faces what one expert calls an ongoing “forest fire.” On a day in late June when Italy reported 135 new cases, the United States reported 35,000; it was up to 45,000 a few days after that, a new record high. The CDC now estimates our total number of actual infections is likely ten times as high as the official count of 2.3 million. Trump has spread misinformation, sidelined experts, and is ending aid for testing in order to keep the true number of cases from being known, since that would reflect badly on him.

Are tax cuts and or conservative judges really enough to justify this vacuum of leadership in the White House during a national disaster?
sharetweet

But from day one, Trump has prioritized his personal, financial, and electoral interests—which are all intertwined—over those of the country. He’s only grown bolder since his acquittal in the Senate on impeachment charges, dismissing inspectors general, exacting revenge on whistleblowers, and intervening in cases involving his cronies. He has seen to the hollowing out of federal agencies, replacing competent professionals with loyalists and lickspittles. This is all in addition to his administration’s plainly immoral policies on immigration and the environment, his attacks on the electoral process, and his relentless and increasingly dangerous stoking of racist hatred. His only real legislative “achievement” has been a tax cut for corporations and the rich, designed to funnel still more wealth to the top.

So does it matter what former national security advisor John Bolton reveals in his long-awaited book about his time at the White House? Yes. Bolton is a warmonger and egomaniac; he refused a House subpoena and went public only after securing a publishing deal. But he has an authoritative first-hand perspective on this presidency. Bolton details Trump’s electioneering of foreign leaders, most notably Chinese President Xi Jinping: Trump pressured him to buy more soybeans and wheat from American farmers in red states, and supported his plans—on two occasions—to expand concentration camps where China’s minority Uighurs are tortured and killed. Bolton also describes Trump’s offer to Recep Tayyip Erdoğan to end a Justice Department investigation in order to help the Turkish president. “I’m hard-pressed to identify any significant Trump decision that wasn’t driven by re-election calculations,” Bolton writes.

Among those still unwilling to condemn Trump, there is a tendency to justify his malignity as a necessary evil in pursuit of political and culture-war wins, or to treat it all as a joke. But now that it’s clear to everyone paying attention that Trump is a man untroubled by widespread death and suffering, a man who appears content to let it all continue as long as he remains politically whole, his remaining supporters must ask themselves a question: Are tax cuts and conservative judges really enough to justify this vacuum of leadership in the White House during a national disaster?