The Confused Debates Over Religion’s Role in Politics
By The Editors
U.S. Catholicism
Bishops
Ethics 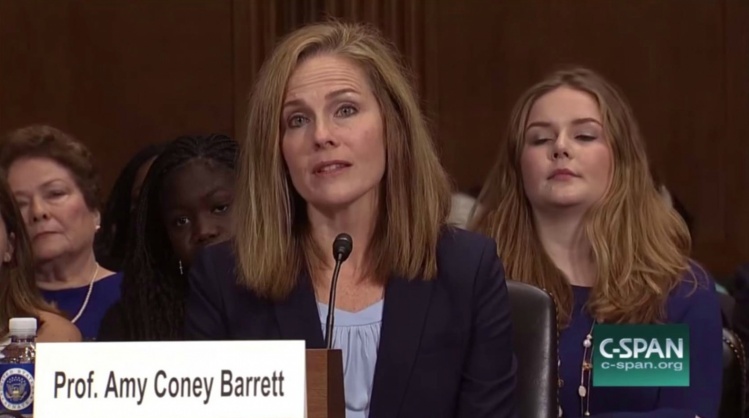 The recent confirmation hearings for Amy Coney Barrett, a University of Notre Dame law professor nominated by President Trump to serve on the U.S. Court of Appeals for the Seventh Circuit, could cause all thoughtful citizens to despair. Both the questioning of Barrett, and the subsequent outcry by conservatives about the statements made by Democratic senators, demonstrate just how confused debates over religion’s role in American political life have become.

The controversy began when Democrats on the Senate Judiciary Committee asked Barrett pointed questions about how her faith might influence her decisions as a judge. Dianne Feinstein sparked claims of anti-Catholic bias by saying, “When you read your speeches, the conclusion one draws is that the dogma lives loudly within you, and that’s of concern when you come to big issues that large numbers of people have fought for years in this country.” Senator Richard Durbin then expressed his concern over Barrett’s use of the term “orthodox Catholic,” noting how it’s often used polemically to dismiss Catholics like himself who hold liberal views on social issues.

It wasn’t long before the senators were accused of applying a “religious test” to Barrett’s nomination, and critics began invoking the dark history of prejudice against Catholics in the United States. The U.S. Conference of Catholic Bishops lamented that the hearings were a throwback to the days when “anti-Catholic bigotry [distorted] our laws and civil order.” The president of Notre Dame, the Rev. John I. Jenkins, called Feinstein’s questions “chilling.” Others deemed the hearings nothing less than an attack on Barrett’s faith. Sensationalist headlines abounded.

These charges don’t hold up to scrutiny. Inquiring about a nominee’s religious convictions, especially a nominee as outspoken about her faith as Barrett, is hardly the kind of formal religious test forbidden by the Constitution. Critics of Feinstein and Durbin ignore the simple fact that exploring the relationship between a judge’s religion and the discharge of her duties is perfectly legitimate. The Catholic faith is not an individualized, private affair without any bearing on public life. It does not separate morality from politics or the law. Asking a judicial nominee to explain the statements she has made about the relationship between her faith and her understanding of the law is fair game, especially when lifetime tenure is at stake. It is exceedingly peculiar for religious conservatives, who have long argued that faith has a necessary and positive role to play in our politics, to be so squeamish about such questions.

The Catholic faith is not an individualized, private affair without any bearing on public life.
sharetweet

Barrett’s work in particular cries out for such questioning. In 2006, she told graduates of Notre Dame’s law school that their careers were a “means to an end,” which was “building the kingdom of God.” While a law student, Barrett published a paper with John Garvey, now the president of the Catholic University of America, arguing that Catholic judges might have to recuse themselves in cases involving the death penalty. She’s also given talks to participants in a program run by the Alliance Defending Freedom, a conservative legal advocacy group. None of this disqualifies Barrett, but it is not bigotry to ask questions about such matters.

For their part, Democrats continue to be tone deaf and often ignorant when it comes to religion. Feinstein’s formulation was particularly odd. It seemed almost designed to stir outrage, while illuminating precisely nothing. It’s possible to question the way a nominee’s faith relates to her judicial philosophy, even with dogged skepticism, while being respectful and nuanced. Democrats need to make clear that what’s under examination is not a person’s faith, but how personal convictions influence how a judge handles her responsibility to be impartial and fair. In Barrett’s case, Democrats and liberal advocacy groups seemed to go out of their way to misread the article she wrote with Garvey on the death penalty, not realizing that it suggested that she would not impose Catholic teaching from the bench, at least when it comes to that issue.

As religious affiliation becomes more aligned with partisan affiliation, it is more important than ever that we be able to deliberate constructively about faith and politics. Republicans should not demand that religious faith be accommodated with no questions asked. Democrats should not treat religious faith like a dangerous eccentricity. In a nation as politically polarized as ours, religion must foster engagement, not condemnation.