What Attacks on James Martin Say about the U.S. Church
By John Gehring
U.S. Catholicism
Bishops 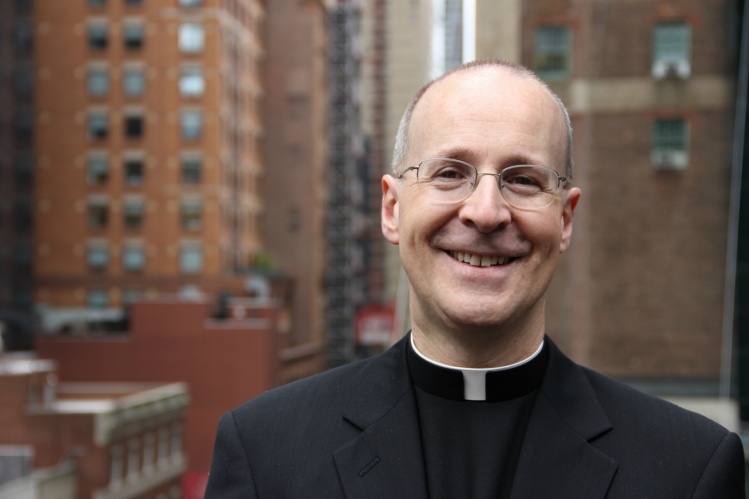 If you’re looking for a Catholic priest who inspires people—and makes them laugh and think—James Martin, SJ, is your guy. At the Ignatian Solidarity Network’s annual conference, he’s greeted like a rock star by swarms of young Catholics who devour his books and remember him as Stephen Colbert’s “chaplain” on the Colbert Report. To say this is unusual is an understatement. Millennials are leaving the church in droves, turned off in part by an institution that has made opposition to same-sex marriage central to Catholic identity in the public square.

This generation of Catholics remains inspired by the church’s rich social justice tradition, has no patience for the culture wars, and is disgusted that their religious leaders are often perceived to be fighting against the human rights of gay people. When I heard the news last Friday that the seminary at Catholic University of America canceled a scheduled talk from Martin because a network of Catholic right attack dogs launched an ugly campaign against him, I cringed. The already-thin thread barely connecting these young Catholics to the institutional church just got thinner. Self-inflicted wounds are hard to heal.

This campaign centered around Martin’s recent book, Building a Bridge: How the Catholic Church and the LGBT Community Can Enter into a Relationship of Respect, Compassion, and Sensitivity—a thoughtful and important work that is anything but radical or heretical. In it, Martin urges the church and the LGBT community to engage in respectful dialogue. He asks the church to think about how language can wound. He doesn’t ask church leaders to drop their opposition to same-sex marriage. Building a Bridge has been endorsed by several bishops and prominent cardinals. Simply put, Martin is not a theological gunslinger looking for a showdown over the church’s hot-button teachings on sex and marriage. He’s an orthodox priest in good standing. The priest was recently appointed by Pope Francis as a consultor to the Vatican’s Secretariat for Communications. His seminary talk wasn’t going to be about LGBT issues. Martin planned to talk about Jesus, himself something of a controversial figure, you could say. So what’s the fuss about?

Self-appointed guardians of orthodoxy such as Church Militant, based in suburban Detroit, have gone after Martin relentlessly, branding his views on homosexuality as anathema. When a group of zealots who show no sense of Christian decency and consistently target faithful people have more sway over a seminary than the cardinals and bishops who endorsed Martin’s book, it raises serious questions we can't dismiss. In an unusual move, Catholic University released a statement clarifying that the seminary’s decision was made “independently of the university.” President John Garvey underscored that “universities and their related entities should be places for the free, civil exchange of ideas.” While it’s good to see the clarification, this is a distinction without a difference in the court of public opinion. “Theological College is the seminary attached to the university,” Stephen Schneck, a recently retired Catholic University professor who directed the university’s Institute for Policy Research & Catholic Studies, told me. “Like any unit of the university it should not be able to reject the policies of the university leadership. Something is wrong if Theological College can operate in public life in ways that undermine or are contrary to the values of the university.”

This Catholic version of McCarthyism—a culture of fear and blacklisting—isn’t new.
sharetweet

Along with the flamethrowers at Church Militant, others on the Catholic far right have also taken aim at Martin. Austin Ruse, president of the Center for Family and Human Rights, has accused the priest of “leading poor gays to perdition,” and describes him as “effeminate” and “out of the closet.” CatholicVote.org, a conservative political group, has also taken vile shots at Martin on Twitter. This Catholic version of McCarthyism—a culture of fear and blacklisting—isn’t new. A few years ago, I spent months researching and writing a detailed report about how a fringy but well-funded network of Catholic organizations is organizing to undermine the church’s social justice work, in particular the U.S. bishops' signature anti-poverty program, the Catholic Campaign for Human Development. David Gibson, formerly a reporter at Religion News Service, wrote about my report here.

Some Catholics who are critics of these organizations think it’s best to ignore them, dismissing their leaders as loud but irrelevant. I’m sympathetic to that perspective, but despite their small size, crude tactics, and loony conspiracy theories, these singularly focused networks do have an impact, as my report found. Funding has been pulled from vital social justice work. Good people have their reputations smeared. Ignoring all of this damage is a form of legitimizing what should never be legitimized.

“I’m less disappointed personally, since I have plenty of talks coming up on the book, than what it says about the outsized power of social media sites that traffic in pure hatred and homophobia,” Martin told me. The disinformation and innuendo isn’t only confined to fringe voices. The Princeton University professor Robert George, an influential Catholic conservative, took to Twitter to accuse Martin of rejecting the moral teachings of the church. Martin pushed back. “Apparently even calling for what the Catechism calls for with respect to LGBT people—‘respect, compassion and sensitivity’—is too much,” he said.

I’m struck by the curious optics at Catholic University right now. In a few days the business school at the university will host a conference that will include a speaking role for the billionaire industrialist Charles Koch, whose foundation is a major funder of the business school. The Koch brothers (Charles and David) make their fortune, in part, by leading companies that have an abysmal record of covering up toxic spills and violating workers’ rights. Koch-funded political networks have fought efforts to address climate change, expand health care coverage to low- income citizens, empower workers through unions and raise the minimum wage—all causes that fit within a traditional Catholic social teaching framework.

A seminary at the only Vatican-chartered university in the country tells a priest who espouses orthodox views that he can’t speak, but the business school at the same university rolls out the red carpet for a wealthy patron of a political network that fights against a Catholic vision for the common good? It makes you wonder what the real scandal is.