A Church That Can & Did Change 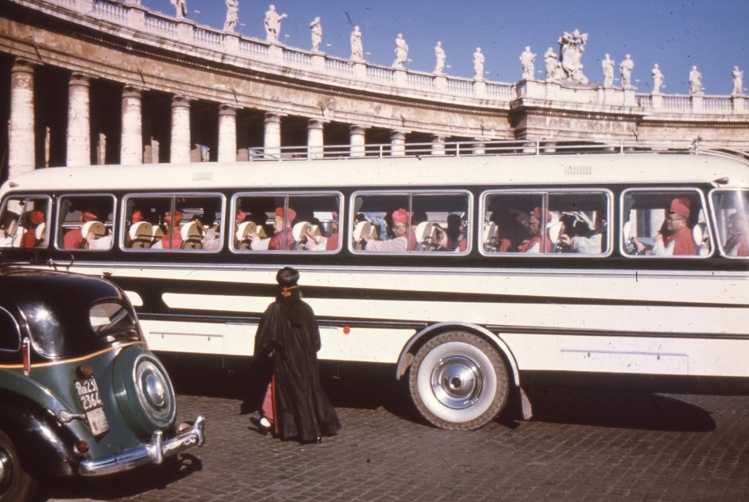 Our society’s toxic “culture wars” have colonized too many sectors within the Catholic Church. One thinks, for example, of the “liturgy wars” concerning what constitutes “authentic liturgical reform” or the recent disputes regarding Pope Francis’s pastoral accommodations for the divorced and remarried. At the level of Catholic ecclesiology, the “culture wars” have morphed into the “council wars,” a fight over the authentic interpretation of Vatican II.

The latest entry in these acrimonious debates is The Reception of Vatican II, a sequel to an earlier collection of essays on the Vatican II documents (Vatican II:  Renewal within Tradition, 2008). Unfortunately, the ideological agenda of the earlier volume continues to inform this new collection. There are some helpful essays to be sure (Driscoll, Wright, Meconi, and DeVille, to name a few) but, as with the previous collection, the fundamental flaw of this volume ultimately overwhelms its virtues. That flaw lies in the guiding convictions of the editors, Matthew Levering and Matthew Lamb, that the authentic reception of the council has been compromised by theologians who appeal irresponsibly to Vatican II in support of their heterodox views. The editors draw on Pope Benedict XVI’s famous 2005 address to the Roman Curia in which he denounced readings of the council based on a “hermeneutic of discontinuity and rupture,” promoting instead a “hermeneutic of reform.”

This preoccupation with the danger of “rupture” within the tradition has created a theological straw man. As Ormond Rush has argued, for the term to have any use in ecclesiology, we must distinguish between “micro-ruptures” that represent a break with a specific feature within the larger tradition (e.g., the council’s break with Pius IX’s teaching on religious freedom), and a “macro-rupture” that represents a repudiation of the tradition itself. It is hard to argue that the council’s teaching contains no “micro-ruptures” whatsoever. Re-framing these “micro-ruptures” as nothing more than instances of “organic development” can seem like so much pious, theological spin.

On the very first page of the introduction the editors announce their opposition to conciliar interpretations that represent “a rupture with previously defined doctrine.” It is not clear what is meant by “defined doctrine.” Is this referring to the church’s central dogmatic convictions? If so, it is hard to find more than a small minority of scholars who would be guilty of such a “rupture.” Or, as I suspect is the case, do the editors mean all church doctrine? Both editors are accomplished theologians who know well that within the tradition there are clear gradations in the authority and binding character of church teaching. By lumping all normative church teaching into the same category, as they appear to do, they implicitly extend the mantle of infallibility over all church teaching, thereby precluding even the most respectful critique of specific doctrinal formulations. This editorial position taints their project, leading to a collection of essays in which a number of contributors carefully avoided even the appearance of challenging current magisterial teaching.

Consider Jeremy Driscoll’s fine essay on the council’s constitution on the liturgy. He helpfully draws the reader’s attention to three seminal ideas informing the constitution: 1) the centrality of the paschal mystery, 2) the way the work of our redemption is communicated through the liturgy, and, 3) the full, active, and conscious participation of all in the liturgy. Driscoll demonstrates persuasively how these three ideas call forth a profound liturgical theology and spirituality still to be realized in the concrete worship of the church today. At several points, he acknowledges the inadequacies of the preconciliar missal. Yet he cannot bring himself to even mention, let alone criticize, Pope Benedict XVI’s problematic teaching in Summorum pontificum that the Tridentine liturgy and the postconciliar missal of Paul VI represent equally legitimate forms of worship. Nor does he acknowledge the way, under Popes John Paul II and Benedict XVI, in which the Vatican’s having seized control of liturgical translations is fundamentally at odds with the teaching of the liturgy constitution.

At the level of Catholic ecclesiology, the “culture wars” have morphed into the “council wars,” a fight over the authentic interpretation of Vatican II.
sharetweet

David Meconi’s otherwise fine essay on the Decree on Priestly Ministry and Life suffers the same defect. The chapter stands out for its careful attention to the document’s textual history and the reformist theology of the priesthood that emerges from that kind of analysis. He rightly notes, over the course of the constitution’s various drafts, the significant terminological shift in the Latin text from clerus to sacerdos and eventually to presbyter, moving from a narrowly cultic conception of priesthood to one that was more pastoral. He also draws attention to the text’s careful avoidance of alter Christus language (the priest as “another Christ”), its orientation of the priesthood toward service to all God’s people, and its emphasis on the humanity of the priest. Yet he carefully avoids any hint of criticism regarding possible shortcomings in current magisterial teaching. One might have hoped, for example, for some comment on the problematic elevation of the discipline of priestly celibacy to a quasi-doctrinal status in Pope John Paul II’s Pastores dabo vobis.

This preoccupation with continuity and its consequent minimization of any substantive shifts in church teaching are evident in too many of these essays. The Thomist scholar Thomas J. White contributes an essay on the Pastoral Constitution in the Modern World Today (Gaudium et spes). Joseph Ratzinger, among others, had complained that the pastoral constitution had an under-developed Christology and Karl Rahner failed to find in Gaudium et spes a sufficiently developed theology of grace. These are legitimate criticisms but they don’t justify a commentator pretending these neglected themes were in fact central to the document approved by the council. White argues for the document’s essential Christocentrism and then asks the reader to endure a long excursus on the significance of thirteenth- and seventeenth-century debates on the nature/grace relationship. He does so in order to emphasize the pastoral constitution’s continuity with a Thomistic theology of grace. This preoccupation with the demonstration of formal continuity leads him largely to ignore the constitution’s emphases on the church’s missionary character, its ecclesial humility, and its solidarity with the world.

Sara Butler seems similarly preoccupied with asserting continuity with the preconciliar tradition in her essay on the Decree on the Renewal of Religious Life (Perfectae caritatis). Butler demonstrates an impressive mastery of the document’s textual history and associated conciliar debates, but puts it mostly to the service of her questionable thesis that many theologians and professed religious have “received and accepted a flawed version of the Council’s doctrine” on religious life. She argues that, against the more common reading of the council, the bishops in fact reasserted the objective superiority of religious life over other vocations to holiness.

Ralph Martin, in his essay on the Decree on the Church’s Missionary Activity (Ad gentes), claims that an excessive “salvation optimism” regarding the situation of non-believers has colored the theological reception of Ad gentes. Unfortunately, he ignores some of the most significant contributions of the document on the relationship between faith and culture and its theology of the local church. The polemical tone continues in Michele Schumacher’s treatment of the Decree on the Apostolate of the Laity (Apostolicam actuositatem) in a chapter dominated by a sweeping denunciation of the pervasive relativism and secularism of our contemporary age.

The merits of several of its essays notwithstanding, this volume suffers from a preoccupation with the refutation of any claim to the council’s substantive revision of church teaching and the rejection of any legitimate critique of postconciliar magisterial teaching. This confrontational reading of the council is no small thing for it undergirds much of the current resistance to Pope Francis. This makes it all the more clear that the embrace of our first Jesuit pope, and the embrace of the dynamic and challenging teaching of Vatican II, go hand in hand.

Richard R. Gaillardetz is the Joseph Professor of Catholic Systematic Theology at Boston College and the author of An Unfinished Council: Vatican II, Pope Francis and the Renewal of Catholicism (Liturgical Press).