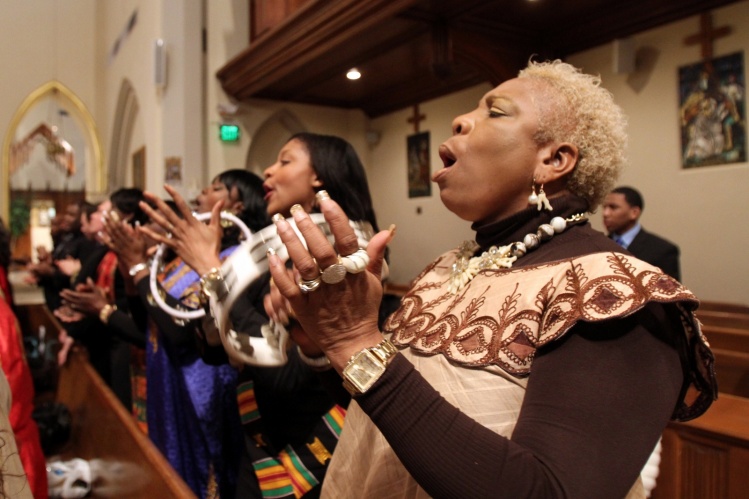 What is a parish? That’s a question I posed in a book review a couple of years ago for the journal American Catholic Studies, and I went on to suggest three possibilities: it’s “a semi-autonomous organization,” “an administrative unit,” or “a community of believers.” As a sociologist of religion and a practicing Catholic, I still grapple with the question. But it’s precisely by contemplating the topic as scholars, members of the faithful, or both, that we may work our way to an answer.

In that spirit, I have for twenty years been examining systemic racism in the Catholic Church, and how that racism impacts African-American Catholic identity. A key to the way I study this is by looking at liturgy as a form of identity work, which means I spend a lot of time at parishes. A sociological understanding of parishes is essential in our current climate because it allows us to see them—and the dioceses of which they are a part—as an element of the broader social structure. Because of the church closings and parish consolidations that have swept through historically Catholic strongholds like Baltimore, Philadelphia, New York, Boston, and Chicago, it is vital that we understand parishes as organizational structures both on their own and in the more general diocesan sense. Doing so allows us to appreciate the multifaceted impact on the community when those organizations change. Changes to the Catholic landscape in recent decades have removed schools and churches from neighborhoods. Institutions that were once anchors of the local community no longer exist, while the buildings that once housed them are empty, demolished, or repurposed. Consequently, it is more difficult for those still living in the affected neighborhoods—especially those who don’t have access to cars or reliable public transportation—to participate in parish life. This disproportionately impacts racial minorities, low-income residents, and the elderly. As a result, groups that deeply depend on their parishes have been losing them at a precipitous rate.

[Of Roman Catholic parishes in the U.S., 798 are considered to be predominantly African American. See the data here.]

Catholicism in the United States has been robustly studied by scholars across a multitude of disciplines, and now parishes and parish life are beginning to get some long-overdue scholarly attention. Yet Black Catholics and the complexities around Black Catholic parishes are still not sufficiently studied. This is especially problematic given that the major shifts in the parish landscape are found primarily in urban areas, and those are the areas with the strongest Black Catholic presence.

I am currently working on a book about systemic racism and identity in the African-American Catholic experience. One of the topics I explore is how African-American Catholics use the liturgy to incorporate the dual heritages of Roman Catholicism and the African-American religious experience to create a cohesive ethno-religious identity. I’ve identified three liturgical styles—traditionalist, spirited, and Gospel—that describe different ways Black Catholics use liturgy to, as I have previously written, “actively produce Black Catholic parish culture.” All three styles use music, preaching, and church aesthetics to integrate the dual heritages.

The traditionalist liturgy style is rooted in the dominant model of U.S. Catholicism, bearing close ties to the style perpetuated by Catholics of European ancestry; it is, therefore, the most common. Its key features include short homilies and a heavy reliance on the missalette for hymns. At Black parishes, it is most often found at Masses dominated by senior citizens who do not care to stray from the liturgical style they have experienced most of their lives. Thus, it’s most likely to be found at Saturday vigils and early on Sunday morning. Next, there is the spirited liturgy style, which is just that: a bit more spirited than the traditionalist style without being wholly divorced from it. That liveliness is expressed principally through slightly longer homilies with a more animated preaching style, as well as through songs that are found in the Lead Me, Guide Me hymnal that are more likely to invoke African-American culture than the songs found at traditionalist-style Masses. Finally, the Gospel liturgy style invokes a kind of worship that is closely associated with the denominations of the Black Church. It uses preaching, music, and church aesthetics to tangibly call on African-American history and lived experience in order to interweave them with Roman Catholicism.

I’ve observed numerous manifestations of these three styles of liturgy. There was the parish in Philadelphia that during the month of December had an Advent wreath right next to the Kwanzaa kinara. There was the parish in Harlem where the pastor deftly used the call-and-response technique closely associated with the denominations of the Black Church to deliver a homily on “Who does God’s will?” and expertly connected the Gospel reading with the lived experiences of parishioners. There was another parish in Philadelphia where a baptism concluded with the litany of the saints. What made this unabashedly Catholic ritual notable is that the litany began with the usual call of Mary, St. Joseph, St. John the Baptist, and the apostles, but it then seamlessly moved into Black saints such as Sts. Perpetua and Felicity, St. Josephine Bakhita, and St. Martin de Porres, and those closely associated with the Black community, like St. Peter Claver. It occurred to me listening to the litany that I’d never heard one specifically directed at the Black community. It was a litany that celebrated Blackness within Catholicism. This was a new experience for me, but it shouldn’t have been. After all, Perpetua, Felicity, Josephine Bakhita, Martin de Porres, and many others aren’t just Black folks’ saints: they’re the saints of the universal church. These saints and Catholic Blackness can and should be celebrated in all parishes. To be clear, I’m not inviting cultural appropriation. Rather, I’m calling for a celebration of Blackness that moves the needle away from systemic racism and toward racial justice.

Ultimately, my work is about breaking down the myth that there are no Black Catholics, or at least that there aren’t enough to merit inclusion in the conversation about American parish life. Black people were practicing Catholicism in North America hundreds of years before the United States was founded. In 1984, the Black Bishops of the United States published the pastoral letter What We Have Seen and Heard. To date, it is the only pastoral letter written by the Black Bishops. In the letter, the bishops called on Black Catholics to be “authentically Black and truly Catholic.” What my research demonstrates is that there is no one, rote way to do this. All three of the liturgical styles discussed here meet the needs of those who utilize them. What matters is that African-American Catholics have the freedom to establish and practice an ethno-religious identity, and have their practice of it be recognized as authentically Black—and truly Catholic.