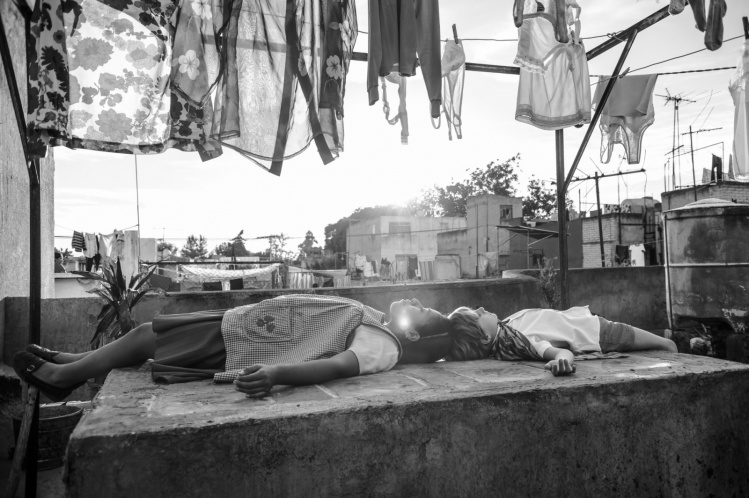 A still from the film ‘Roma’ (Netflix)

With just eight films made over a thirty-year career, the Mexican director Alfonso Cuarón has won ecstatic accolades from critics. (A. O. Scott: “rewrites the rules of cinema”; Richard Corliss: “a movie visionary of the highest order.”) Cuarón’s eclectic oeuvre includes his 2001 breakthrough movie, Y Tu Mamá También, a Mexican road-film-cum-love-triangle-drama; the 2004 Harry Potter and the Prisoner of Azkaban; Children of Men (2006), a dystopian sci-fi thriller; and Gravity (2013), a visually operatic tribute to space movies. The critical praise now continues for his new film, Roma, which has snagged two Golden Globes and is the odds-on favorite to win the award for Best Picture at the Oscars (it’s also nominated for Best Foreign-Language Film).

Roma takes its name from a neighborhood of Mexico City where wealthy professionals reside in comfortable households managed by cooks, nannies, drivers, and servants. It’s the neighborhood where Cuarón himself grew up, and his film, which depicts the life of a doctor’s family, has a strongly autobiographical tilt. Topical clues (we see presidential campaign posters for Luis Echeverría Álvarez) suggest a timeframe of 1970–71, when the director was ten; one of the family’s children has a fanciful imagination and is particularly taken by space flight and astronauts; in interviews the director has disclosed that the dedicatory postscript, “Para Libo,” is addressed to his own childhood nanny, who—renamed Cleo—is the film’s protagonist.

Given all the noise Roma is making, it’s worth noting that this is an unusually quiet movie; if you go in expecting to be blown away, you might need a few minutes to gear down to its deliberate and meditative pace. That pace is announced in a mesmerizing opening image, a close view of floor tiles in rows like a chessboard, with wave after wave of soapy water rolling over them; in the water we see reflected the bright space of a window, and the shadow of a jet plane passing in the sky. The image poetically prefigures themes to come: the repetitive chores of a maid who labors ceaselessly; waves coming in from the sea; the fantastic adventure of plane travel and its division of society into those who travel and those who can’t.

Roma is shot in black and white, and its scenes of domestic life, filled with background noises of the streets—kids playing, dogs barking—evoke the look and feel of Italian neorealism. In that tradition, Cuarón deployed non-professional actors, searching far and wide before finding Yalitza Aparicio, a preschool teacher from Oaxaca, to portray Cleo. He then chose Aparicio’s real-life friend Nancy García to play her friend in the film, and wrote parts of the dialogue in their indigenous language, Mixtec. The family Cleo serves includes Antonio, a doctor seemingly preoccupied with work; Sofia, his teacher wife; and four young and clamorous kids. The production settings were designed by Eugenio Caballero, who created the sumptuous visual fantasy of Guillermo del Toro’s magnificent Pan’s Labyrinth; finding a graceful Mexico City house slated for demolition, he restored it to period-piece authenticity, and the movie is a time capsule stocked with toys, furniture, pop music, and TV shows of the era.

Despite the nostalgic look, Cuarón’s take on the lives of Mexico’s bourgeoisie is unsentimental. Americans may startle at the sight of an infantilized ruling class that does almost nothing for itself and feels not the slightest qualm. Where are my keys? Where’s my brown tie? What does the dog need? “Ask Cleo,” goes the refrain. With that level of dependence comes a complicated relationship. In one scene the family gathers on sofa and chairs to watch TV, and as Cleo goes from one to the next serving snacks, they don’t even look at her; her invisibility seems like a casual slight of class. But then Cleo becomes interested in what’s on TV, and sits down next to the daughter, draping an arm around her and snuggling in. Both servant and family member, she is exploited and loved in equal measure. Not only does she feed the family and clean up after them, she counsels the children, plays with them, at one point intervenes heroically to save one of their lives. What is left for the parents to do?

The film supplies, and depicts, the classic bourgeois answer: have affairs, get drunk, smash up cars, host raucous parties, and in general disport themselves heedlessly while leaving the Cleos of the world to clean up the mess. The social and political critique Cuarón applies to this lifestyle tosses up some pleasing absurdities—like the wealthy relatives the family visits in their countryside villa, where the stuffed heads of generations of dogs are mounted on the wall. There follows the bravura set piece of a New Year’s celebration, Jesus Christ Superstar playing on the record player while a boozy party takes place in a living room that is a grotesque diorama of stuffed hunting trophies—a drunken conga line snaking among them, as Cleo watches. The scene captures the way the servant class lives at one remove: their masters entertaining themselves while they, the servants, look on.

Roma does not have much of a plot. What does push it forward, in jarring lurches, are hard events that invoke the one reality uniting the master and servant classes: the feckless irresponsibility of men, and the contempt—now casual and latent, now bold and violent—with which they treat women. “No matter what they tell you, we are alone,” Sofia, drunk and desperate in the aftermath of a marital reversal, says to Cleo: “We women are always alone.” Throughout Roma, Cuarón cannily interrupts close attention to the details of domestic life with sudden impingements of colossal forces: an earthquake, a fire, a violent mass demonstration. The effect is to suggest lives lived with a certain fatalism, driven by forces beyond anyone’s control, especially a woman’s.

Roma serves up a lush and seductive cinematic experience. Does it all hang together? Does it need to?
sharetweet

Roma reminds us that movies are a visual medium, and that some of the most powerful moments cinematic storytelling can deliver are purely imagistic. I was reminded not only of Italian neorealism, but also of the films of Terence Davies, whose explorations of a wartime childhood, like The Long Day Closes, can move you to tears with a lengthy shot of rain pouring through the torn roof of a long-abandoned flat. In Roma there’s a scene in which Cleo plays with one of the kids, the two lying down head to head on the sun-splashed patio as the huge load of laundry Cleo has just hung up to dry drips and glistens in the sun. The scene captures the mix of toil and tenderness that is Cleo’s life in an indelible image that seems to speak louder than words.

Yet more words, or different ones, might have improved Roma. Like a nineteenth-century novel, the film paints on a broad social canvas, with a realism attentive to class, manners, and settings. Yet it lacks anything resembling a novel’s character depth and development. Even though the family’s children are based on the director himself and his siblings—and even though they spend a great deal of time onscreen—they are hardly differentiated from one another; indeed, the furnishings of the family’s home receive far more detailed attention than the children themselves. The father barely merits a dozen lines of dialogue; all we apparently need to know about him is summed up in one highly stylized shot of his arrival home from work inside his car and showing only his hands, honking the horn and stubbing out a cigarette. Is it that Cuarón is content to blur the family’s individuality in order to leave them, in effect, as a class?

As for Cleo, she remains similarly unfilled-in. At one point she speaks longingly about her village, yet Cuarón never takes us there, and we learn next to nothing about her family or upbringing. Is this a virtue, in an absence-as-presence kind of way, or a shortcoming? By presenting his protagonist as a cipher, has Cuarón succeeded in fashioning a trenchant and poignant truth, or has he merely simplified his protagonist into someone who is less human being than symbol? One might compare this film with Kore-eda’s newest release, Shoplifters, a film that shares Roma’s sympathetic concern for the marginalized but captures each family member’s personality with vivid particularity.

Similar concerns arise elsewhere in Cuarón’s movies. Gravity in particular revealed a discrepancy between visual power and serviceable-at-best writing, its script indulging tearjerker banalities that cinematographer Emmanuel Lubezki compensated for with images of overwhelming beauty. That film possessed a creeping strain of sentimentality, with George Clooney’s character presented—seemingly unironically—as a stoical, self-sacrificing, manly American hero. In Roma, one senses a Victorian, West-End-looks-at-East-End moral outrage (Dreiser or Crane might be the American equivalents) over innocence exploited, the milkmaid or flower girl thrown upon the hard streets. Some scenes toward the end of the film are emotionally devastating, with Yalitza Aparicio’s beautiful face, now impassive and inscrutable, caught in studies of quiet suffering, and all but numinous in its sorrow, serving as a cinematic Pietà. Norman Mailer once complained of a Saul Bellow novel that Bellow pours sympathy like cream over his protagonist; by this standard, there’s a good deal of cream ladled out in Roma. The film risks turning Cleo into a symbol for all who toil and suffer anonymously. It is deeply moving, even if one feels a lingering bit of mistrust.

Roma serves up a lush and seductive cinematic experience. Does it all hang together? Does it need to? Cuarón himself clearly possesses an ambivalence about his childhood, and he expresses it in a work that is at once a Proustian appreciation and recapture and a deft social critique of a morally vacuous bourgeoisie. The film depicts a deep class divide, then moves unexpectedly toward surmounting it via shared experiences of loss, sorrow, and healing, and closes on a note of ambiguous and open-ended hopefulness. But for whom, exactly? One feels certain that the realities depicted so lavishly in Roma bode well for the future filmmaker. But we are left less certain about his nanny.