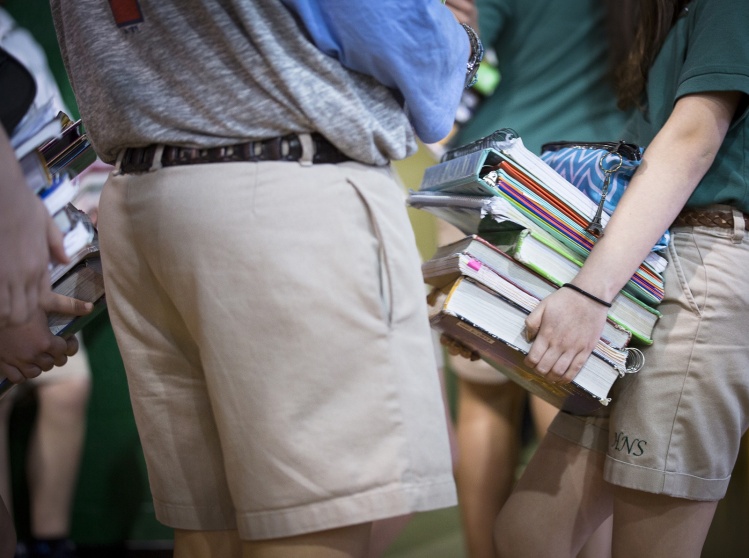 When Karen Pence announced she had accepted a part-time job at Immanuel Christian School, there followed what in hindsight was a foreseeable national uproar. Immanuel Christian requires employees to sign a pledge promising to, among other things, avoid “moral misconduct” that includes “homosexual or lesbian sexual activity, polygamy, transgender identity…. and any other violation of the unique roles of male and female.” The hashtag #exposeChristianschools immediately trended on Twitter, and soon Mike Pence jumped in to demand an end to “attacks on Christian education.” The controversy isn’t simply theoretical for me. My daughter attends Sheridan School, an independent private school that plays Immanuel Christian in sports. Sheridan wasn’t aware of the other school’s policies until the Pence debate began to unfold.

“Given our school’s fundamental belief in diversity and inclusion as expressed in our diversity statement, this information, and what to do about it, poses obvious challenges,” wrote Jessica Donovan, Sheridan’s head of school, in an email to parents. Donovan led a series of conversations with coaches, student leaders, and some parents. Most students wanted to continue playing Immanuel Christian, while making a peaceful statement by wearing rainbow socks or warm-ups to affirm inclusive values. I think this would have been a measured, appropriate response. The head of school also noted in her communication with parents that some students “did not feel safe entering a school that bans LGBTQ parents, students or even families that support LGBTQ rights,” and that “forcing our children to choose between an environment in which they feel unsafe or staying home was not an option.” Donovan invited Immanuel Christian to play their games at Sheridan, an offer the school declined. The two schools will no longer play each other.

Reaction on the right was swift. Prominent conservative writer Rod Dreher, author of The Benedict Option, pounced. “The Sheridan School, which describes itself in its mission statement as ‘progressive,’ took to the fainting couch over the fact that its sports teams had to play a bunch of gross Evangelical kids,” he wrote in a post entitled “Immanuel & the Cost of Discipleship.” In keeping with a growing consensus among conservative Christians, Dreher sees the incident as part of a broader cultural backlash against religious communities that hold views about human sexuality and marriage that are increasingly out of step with public opinion and conceptions of human rights:

They don’t have to pass laws hemming in orthodox Christian schools. They can accomplish a lot simply with social pressure. The Christian students and parents at Immanuel will now get a lesson in what it means to endure spite for the sake of fidelity. And so will the rest of us watching from the sidelines. Sheridan School has actually done Immanuel a favor, showing them the cost of discipleship. It’s not really about sports, but about learning how to bear social stigma with grace and courage. If your Christian school can’t handle being hated and shunned by a sports league, it won’t be able to stand up to real persecution.

If we stop talking, eating, and playing together, we easily become caricatures, agendas, and faceless ideologies, rather than complex human beings struggling to be in community together.
sharetweet

I’m a Christian who attended Catholic schools from kindergarten through college. I believe LGBTQ people have every right to full equality, including civil marriage. As a progressive Catholic, I’ve been encouraged by Pope Francis’s efforts to make the Catholic Church more welcoming for LGBTQ people; I’m also sadly aware of how Catholic schools have fired gay teachers and that transgender Catholics can’t always count on our church to be an ally. I work for a liberal faith-based organization in Washington that partners with a network of interfaith clergy across the country, a few of whom are theologically conservative. I provide this context to make clear that I believe faith has a vital role to play in public life. I don’t dismiss claims from my fellow Christians whose religious commitments on sexuality and gender differ from my own.

While his tone is mocking and his description of this situation unhelpfully cartoonish (“gross Evangelical kids”), Dreher knows there are difficult tensions worth grappling with if we value a healthy pluralism. Sadly, as our politics and culture become more balkanized—research shows we spend little time interacting with or even know people who vote differently than we do—these conversations are becoming increasingly difficult to have. The loudest voices can often create an environment in which defending turf or making a statement is valued more than approaching difference with humility and empathy. Some progressives who preach inclusion and tolerance have little tolerance for ideas or institutions that clash with their own orthodoxies. At the same time, conservative Christians often embrace a victim narrative and are quick to see persecution when the story is more complicated.

Immanuel Christian, of course, isn’t representative of all Christian schools. “We were clear to separate the ideals of Christianity with the policies of this particular school, as we play many Christian schools that support LGBT rights,” Sheridan’s headmaster wrote in her email. This fact makes it harder to view Sheridan’s response as reflecting contempt for “Christian values,” since diversity within the Christian community, and even within denominations, offers a more textured picture. I appreciate that my daughter’s school approached this challenge thoughtfully. Even so, I’m left wrestling with how we progressives can affirm human rights and inclusion, while also taking care not to isolate our kids from those who disagree with us. I’ve written critically of instances when the Catholic Church has cut off funding from anti-poverty and other social-justice organizations the church has supported for years once those organizations enter into broader coalitions that include people who hold different views on same-sex marriage and abortion. This “guilt-by-association” defunding happened even when the purpose of joining these coalitions wasn’t to advocate on behalf of issues that the Catholic Church opposes, but rather to increase the potential of advancing policies it supports—such as immigration reform or living wages.

In recent years, as more Christian denominations support LGBTQ rights, some Catholic bishops have pulled their dioceses out of ecumenical and interfaith coalitions that for many decades brought denominations together in common cause around social-justice issues. Refusing to partner or even associate with people or institutions unless there is consensus on every issue, whether theological or political, makes for tough going in a diverse democracy where civic engagement requires navigating differences. This doesn’t mean we compromise our values or water down convictions just to get along. We can uphold commitments and engage with others who have different guiding truths, hoping there are bridges to be built but also knowing there will be lines we can’t cross.

Given that most Sheridan students wanted to continue playing at Immanuel Christian, while wearing a symbol of respectful dissent, there may have been an opportunity to work with those students who expressed a safety concern about traveling to the school. Starting with a reminder that Sheridan has played games at Immanuel Christian in the past without any altercations or concerns, school leaders might have pulled together a team of parents and coaches who could travel to the away games and serve as a designated resource in case tensions escalated. Is a school that has shown no evidence in the past of creating a hostile climate for visiting teams likely to change for the worse now that it’s in the glare of media scrutiny? In the name of standing up for human rights and inclusion, values I share and want my daughter to learn, I can’t help but think there was a missed opportunity here for both schools. If we stop talking, eating, and playing together, we easily become caricatures, agendas, and faceless ideologies, rather than complex human beings struggling to be in community together.

Let me step back and try to model the humility I’ve encouraged. I know as a straight white man my perspective here is formed in part by my status as someone who is not a sexual minority, and who isn’t a target for bullying or violence because of my gender or sexuality. I also recognize that this was a difficult decision, and my intent is not to second-guess anyone on the specifics of the situation. Rather, I want to consider the broader cultural challenges and how we might navigate them moving forward. As a growing number of Americans across the ideological spectrum, including many people of faith, are rightly more insistent that LGBT rights are human rights—and as conservative Christians feel attacked for holding views about sexuality and marriage that until quite recently were widely accepted for centuries—how can we work through a necessary transitional stage in history with grace and goodwill? This is a question I don’t have an easy answer for, but it’s a question I hope we at least keep asking.

Can Faith Leaders Get Through to John Kelly?