‘Captain Phillips' & 'All Is Lost'
By Richard Alleva
Movies 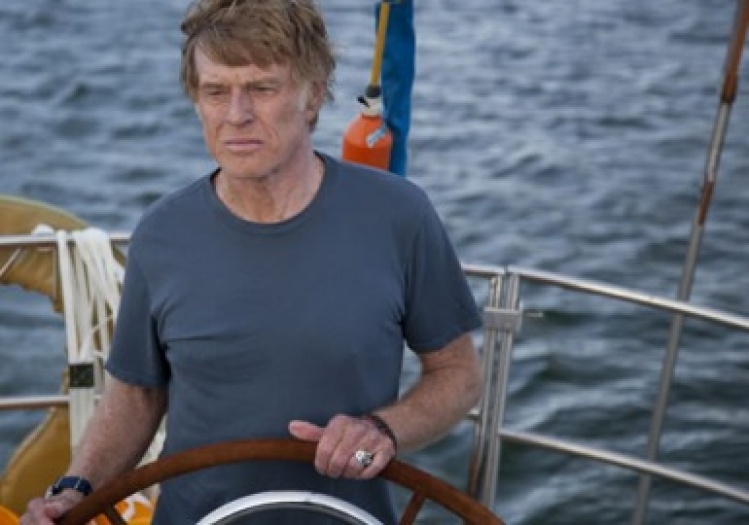 Can a movie be both thoughtful and electrifyingly exciting? I think Captain Phillips is. Its omniscient camerawork makes you feel like a helpless god viewing everything from every angle without being able to intervene. Its blitzkrieg editing, throbbing soundtrack, complex but coherent action choreography, and naturalistic acting all go to work on your senses. You leave the theater wondering how many complete breaths you’ve taken during the last 140 minutes.

The film is mainly based on Richard Phillips’s memoir A Captain’s Duty, a story that almost begs to be turned into an action-rescue movie, containing, as it does every plot twist, tease, and reversal known to the genre. It’s like the real-life version of Steven Seagal’s Under Siege. Pirates attack an American container ship just off the coast of Somalia, but the well-drilled crew goes into hiding just as the captain (played by Tom Hanks) is taken prisoner, and soon they capture the pirates’ leader, Abduwali Muse (played by Barkhad Abdi). Cheating on a prisoner exchange, the pirates transfer Captain Phillips onto a lifeboat, which gets tracked by a U.S. destroyer. (The American government, unlike the Europeans, has vowed not to pay ransoms to pirates labeled as terrorists.) Then, like the cavalry in a Western, a Navy SEAL team arrives. Surely, given these ingredients, any yeoman director could have succeeded simply by milking the suspense for all it was worth.

But Paul Greengrass has more than yeoman credentials and aims. With United 93 and two of the Bourne movies, he perfected his signature blend of documentary cinematics and thriller content. In those films evil was easy to recognize. Something more complicated is at work in his latest—something that made me wonder whether a better title would have been Captain Phillips and Captain Muse. For it becomes increasingly clear that this is the story of two leaders: the American trying to fulfill his duties to employer and crew; and a desperate pirate in thrall to the real villains of the story,the offscreen fat cats, in Africa or the Middle East or even the Americas, who target ships and then pay starving Somalis a pittance to do the dangerous dirty work while skimming off millions for themselves. At one point Muse boasts to Phillips that he once captured an Indian ship ransomed at $6 million. “Six million!” exclaims Phillips. “Then what are you doing here?”t The question, naïve yet pointed, gets no response, but Muse’s braggadocio evaporates. This isn’t Die Hard dialogue, with Bruce Willis out-quipping the bad guys just before he offs them. Phillips may be temporarily trapped, but his captors have been trapped for their entire lives by history, geography, and economics. Even as they scream their threats and brandish their guns, the armed forces of a superpower are preparing their doom. Once the SEALs complete their mission, Greengrass’s camerawork suddenly becomes uncharacteristically subjective: we see the bodies of pirates littering the lifeboat through the eyes of the harrowed Phillips. His happy ending has come at the expense of their tragedy.

I don’t mean to suggest that Greengrass is proposing some sort of moral equivalency. (“See, the agents of capitalism are just as bad as pirates!”) We never stop rooting for Tom Hanks and hoping for his escape. But the director makes sure that our relief is devoid of smugness. The good guys have won, but the bad guys—the real bad guys—remain unscathed and ready to strike again. They will find other Muses.

Another seaman is in trouble of a very different sort in All Is Lost, written and directed by J. C. Chandor. On the Indian Ocean an unnamed man (played by Robert Redford) awakens on his private boat to find that a floating container of sneakers has ripped a large hole in his hull. The entire movie details his efforts to patch his wounded vessel, reestablish contact with the world, learn celestial navigation from a book, maintain his water supply, and avoid storms. When the boat finally sinks, he tries to survive on an inflated life raft, catch fish, and avoid sharks, all the while scanning the horizon for rescue.

The film’s very title signals doom, and even before the main action begins, we hear Redford’s voice bidding goodbye to loved ones—words that turn out to have been in the note he put in a bottle and cast into the sea after eight days of courageous struggle. Yet there’s more story to be told after that bottle floats away. Will the sailor survive his despair?

What we have here is a Robinson Crusoe in reverse. Through sheer gumption and  resourcefulness, the stranded Crusoe builds a habitat, hunts and farms, sews new garments, acquires pets and a faithful manservant, fights off cannibals, and generally extends human dominion over nature. Defoe’s book was an ode to self-reliance. All Is Lost gives us a man every bit as determined as Robinson, yet here nature wins at every turn, finally reducing our hero to King Lear’s vision of “unaccomodated” humanity as “a poor, bare, forked animal.” There is a Sisyphean hopelessness here but also a Sisyphean defiance, which reminded me of Samuel Beckett’s “I can’t go on, I’ll go on.”

All Is Lost offers the usual satisfying excitements of any survival story, but this isn’t primarily a nail-biter or a spectacle or even a piece of at-one-with-Mother-Nature mysticism in the manner of Life of Pi. It’s a dogged, Spartan work kept sufficiently entertaining by pacey editing, beautiful but unpretentious cinematography, Redford’s unimprovable performance, and Chandor’s almost clinical interest in pushing his hero to biological extremes.

The narrative doesn’t indulge us. There is no prologue (as in Cast Away) to tell us what the hero’s life was like before the disaster—or even why he undertook such a far-flung, solitary voyage. Nor are there any soliloquies in which the protagonist can reveal his thoughts. (All the dialogue in this hundred-minute movie could be packed into a single tweet.) No flashbacks. No dream sequences or voices from the past. No hallucinatory dialogues with animals or anthropomorphizing of soccer balls. In fact, All Is Lost can be seen as a reproach to Cast Away and Life of Pi. Those movies took shelter in oases of comedy, flights of fancy, and beautiful sunsets. Chandor’s movie is as hard and bare as a sea-swept rock.

In a way, the film’s real terrain isn’t the ocean but Redford’s aging physique. Now seventy-six, in reasonably good shape, he does nothing to conceal an elderly body’s dwindling reserve of energy. And the frailty amplifies the suspense as we watch the actor doing all his own stunts at just the pace he can maintain while suffering all the pains and discomforts such a hardship entails. (It’s reported that one of Redford’s ears was actually injured during the filming.) Chandor’s camera stays so pertinaciously close to the actor that we feel the protagonist’s reactions and apprehensions with an intimacy rare in films as intensely physical as this one. Every time Redford sees trouble looming, we see it, too—in his features. Chandor and his camera crew admirably simulate disaster, but it’s Redford’s eyes that make us inwardly flinch.

The Right Man for the Job