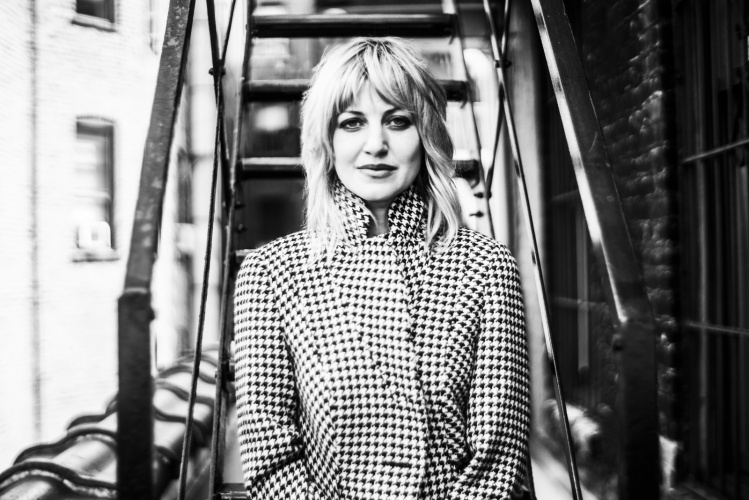 Anaïs Mitchell, whose songs convey how everyday actions can have larger ramifications / photo by Jay Sansone

“Just so you know,” folk musician Anaïs Mitchell joked as she tuned her guitar, “I wrote this song ten years ago.”

The forty or so people filling the mid-Manhattan restaurant on a rainy March weeknight laughed knowingly. Mitchell has attracted a loyal following of fans, mostly of a generation that grew up with folk music. Her voice is girlish but cutting. She is best known for her album Hadestown, a folk-opera based on the story of Orpheus and Eurydice set in Depression-era America (and which is a touring theater production), but she has released several solo albums as well.

“Why We Build the Wall,” the decade-old song Mitchell referred to, is part of the Hadestown story. The character Hades, a slick billionaire promising security and prosperity to a desperate band of Americans, builds a wall to keep out the poor. “Why do we build the wall, my children?” he asks. “We build the wall to keep us free!” they reply. “Because we have and they have not, because they want what we have got!”

Mitchell does not keep her politics secret; she told the audience that just a few hours earlier she’d been protesting Donald Trump’s executive orders dismantling environmental protections. Elsewhere she’s acknowledged that while her lyrics have assumed new meaning since Trump’s rise to power, “the wall is not a new image. It’s a powerful archetypal image, and Trump is simply tapping into that…. They hear about a wall and it makes them feel safe and strong. Unfortunately neither Trump nor Hades are un-clever.”

But Mitchell, whose songs dwell on everyday relationships between lovers and among family, more typically addresses politics in the broadest sense: how the decisions that people make can shape the world around them. Critics note that Mitchell’s music manages to be erudite without being pretentious; the ego that one might expect to accompany a “concept album” or an “opera” of any kind is nowhere to be found. Mitchell’s imagery is simple, direct, and tactile, but this heightens rather than detracts from her work’s sophistication. Her vocals are free of affectation, so the attention is on her characters—all rendered humanly, with complex inner lives inevitably influencing their encounters with the outer world.

Her 2012 album Young Man in America is full of such people, caught in the knots of human relationships. In the title track, the protagonist laments his rootlessness and the fear that his neglectful parents left him with, worrying that it might poison everyone around him. He dreams of finding someone to love:

The album’s Americana style makes it feel like an indictment of our country’s characteristic restiveness, and perhaps its uncertain future. The BBC’s James Skinner has noted that the “restless, desperate existence of [the] protagonist serves to equate our modern times and misplaced sense of duty (of materialism broadly) with the individual crises these characters suffer.” Mitchell doesn’t point to any particular political issue, but draws the listener’s attention to the conditions we live in together.

In “Wedding Song,” also from Hadestown, Mitchell has Orpheus and Eurydice wonder about one of the most political questions ever asked: can we trust that there will be enough for everyone? “Lover, tell me if you’re able,” Eurydice asks the poor poet Orpheus, “who’s gonna lay the wedding table // Times being what they are / dark and getting darker all the time.” He responds with a smile:

Lover, when I sing my song
All the trees gonna sing along
And bend their branches down to me
To lay their fruit around my feet
The almond and the apple
The sugar from the maple
The trees gonna lay the wedding table

In Mitchell’s version of the story, Orpheus’s faith in the world’s abundance clashes with Eurydice’s doubt; Eurydice strikes a deal with Hades because she doesn’t trust Orpheus. The plot Mitchell crafts shows how their divergent views lead them to different conclusions about the political and moral order of Hadestown itself.

In a time of political binaries and a disorienting barrage of news, it is tempting hear “Why We Build the Wall” and point fingers at the president. This might be justifiable, but Mitchell says we should first look closer to home—attending to the people and things around us without losing sight of how our actions may affect the world at large.