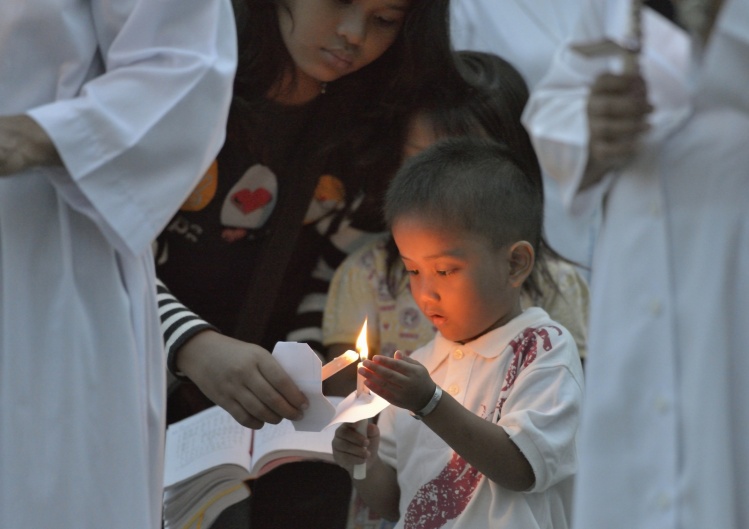 We were just murmuring a low-profile grace before dinner at an Italian restaurant expats favor in Banda Aceh when the evening call to prayer, loudspeaker-strong, blared from a nearby mosque. It gave our pizza slices a certain savor.

Aceh is best known for the tsunami that drowned this coastal region of Indonesia in December 2004. But I was there recently because of Aceh’s other claim to notoriety. It’s the only province of Indonesia to have implemented sharia law.

Perched on the northwest tip of Sumatra, Aceh is that part of Indonesia located closest to the Middle East and Arabia. Hence its traditional nickname, Serambi Mekkah: “Mecca’s front porch.” It was from Aceh that Islam began its conquest of the islands of the East Indies in the thirteenth century; and it was from Aceh that many Muslim pilgrims sailed to Mecca to make the hajj.

Led by GAM (Gerakan Aceh Merdeka: “the Free Aceh Movement”), Acehnese Islamists fought a brutal civil war for decades against Indonesia’s national government, trying to secede from a Muslim-majority country they condemned as insufficiently pious. The tsunami forced a halt in the violence. GAM signed a peace deal with Jakarta in 2005 that gave Aceh considerable autonomy. As a result, Aceh remains part of Indonesia but is unique in having a sharia-based local government. At first Islamic law applied only to Muslims; but recently it’s been extended to everyone else.

In November I went to Aceh’s capital, the port city Banda Aceh, to glimpse what life is like under sharia. My first stop was the Baiturrahman Mosque, the city’s chief place of worship. I picked a moment between prayer-times. But no sooner had I entered the Mosque’s perimeter than guards intercepted me to ask my religion. Once I identified myself as Christian, they told me non-Muslims are forbidden to set foot within the mosque. Take your photos from a distance, I was told; and as soon as the muezzin’s cry proclaimed the next round of worship, I’d have to vacate the grounds altogether.

Baiturrahman is one of several mosques in the city where the most high-profile part of Aceh’s sharia is executed: public canings after Friday prayers. The sentence is imposed on those found guilty of gambling, drinking, or sexual violations such as khalwat (“inappropriate proximity,” as when unmarried couples are caught holding hands).

Now that Aceh’s sharia law has been extended to non-Muslims, it’s not only Islamic believers who must beware. In April, a sixty-year-old Christian woman was subjected to dozens of lashes. She had allegedly sold alcohol.

Acehnese Muslims I asked about sharia said the worst part of caning isn’t the pain but the prospect of public shame. When the scourging takes place, they say, there are your neighbors from the mosque, holding up their smartphones, recording your disgrace. And as for those Muslims who try to opt out of Friday prayers: they may find themselves confronted by uniformed members of Wilayat al-Hisbah (the “Ministry of Public Morals,” known by its acronym WH, pronounced “Way-Ha” in Indonesian). WH enforcers approach Muslims they see in the street at Friday prayer-times and exhort them to get themselves to the nearest mosque. WH also targets young women at traffic stops, stopping females on motorbikes if they’re insufficiently veiled or wearing jeans deemed too tight for Muslim tastes. They’ll be plucked from their bikes and made to change to “modest dress” before they’re allowed to proceed.

Islamic vigilance is directed especially at anyone who might become a murtadd (an apostate or spiritual renegade). Aceh’s sharia law prohibits Muslims from abandoning their faith and converting to another religion. In Banda Aceh I heard stories of teens caught reading a Bible or searching online for information on Christianity.

In some cases anxious parents put their spiritually restless children in a pesantren (Islamic boarding school), supaya dimurnikan, as one Acehnese informant told me: “so they can be purified” and undergo Islamic re-education. Muslims who persist in their attraction to Christianity face even harsher consequences: ostracism and job loss, beatings and death threats. Some ex-Muslims flee to Jakarta or cities in Sumatra beyond the reach of Aceh’s Islamic law. Others remain but keep their Christian faith hidden.

Hypersensitive wariness characterizes the attitude of many Acehnese Muslims toward non-Muslims in their midst. An American Christian teacher I met in Banda Aceh told me her English lessons are sometimes interrupted by students who complain that when she writes the letter “t” on the board, she’s actually propagating the sign of the Cross as part of a secret plot. Kristenisasi umat Islam, it’s called: “bringing about the Christianization of the Muslim community.”

“Acehnese Muslims are afraid of the Cross.” This comment was offered to me by a thoughtful young Muslim lecturer I met at Banda Aceh’s Universitas Islam Negeri (UIN). He told me that conspiracy theories about forced Christianization flourish in part because so much of Aceh is religiously segregated. Very few Acehnese Muslims know any Christians or have any Christian friends. And Aceh’s politicians seem content with this state of affairs. “Very few people in the government here,” the UIN lecturer told me, “have any interest whatsoever in tolerance or pluralism.” Many of these politicians are ex-GAM fighters and remain militantly Islamist in their orientation.

But anti-Christian attitudes and sharia-mindedness have negative effects for Muslims, too. Another young lecturer I interviewed at UIN (I’ll call her “Nabeela” rather than use her real name)—a devout Muslim who goes about scrupulously veiled—told me what happened when she recently taught a course on gender issues in contemporary society. Since all her students were Muslim, she decided to introduce an interreligious perspective by taking them to a local church in Banda Aceh. There the pastor spoke with them frankly about the challenges Christian denominations face as they respond to concerns involving women and their role in today’s world. The Muslim students attending this talk reacted favorably. But that was not the case with many of their families, as well as the local Acehnese Muslims who found out about this field trip. “They heard I’d taken Muslim youth to a church,” said Nabeela, “and that I’d let a Christian talk to them. And that was enough to make people think I was a murtadd who wanted to make other Muslims lose their faith as well and turn into Christians.”

The result: threats against Nabeela and her family, and demands that the university fire her. She was suspended from teaching and, fearing for her own safety, she hurried to Jakarta and lived there quietly for three months. Eventually, as she explained to me, UIN allowed her to teach again—but with the understanding there’d be no more field trips to churches.

Sharia-mindedness has negative effects for Muslims, too
sharetweet

Overwhelmingly Islamic as it is, Banda Aceh nonetheless also includes a downtown neighborhood called Peunayong that is exceptional for its religious diversity. Peunayong is the city’s Chinatown: since at least the nineteenth century, Chinese immigrants have settled there as merchants and shopkeepers. (And it should be noted that in recent decades ethnic-Chinese Indonesians have been the sporadic targets of communal violence, in Banda Aceh, Jakarta, and other parts of the archipelago.)

In Peunayong I found old Hindu and Buddhist temples, along with several gereja-gereja resmi—longstanding “official churches” that are licensed by Aceh’s government to hold religious services. One place of worship, the Catholic Sacred Heart Church, dates to the 1920s and Dutch colonial times. Pastors I interviewed explained that their congregations are tolerated as long as they don’t evangelize or encourage Acehnese Muslims to convert.

But faith has a way of slipping past government control. Besides the “official” places of worship, Peunayong has many unlicensed “underground” Christian congregations: recently emergent house-church communities where small gatherings of a few dozen believers at a time will meet. Some of the illegal services I attended were in private homes; one was crowded into a small upstairs office at the back of a garage. Aceh’s government tries to crush the growth of Christianity by refusing to issue permits for building new churches. But these underground groups need no churches to thrive.

Some congregations consist of expats from Australia and the United States; others, ethnic-Chinese Indonesians or collections of Christian Sumatrans and Javanese. They pray, share food, and read from the Bible. To judge from my visits, all these groups seem to favor verses from Saint Paul’s epistles that instruct the faithful in how to survive persecution and stay strong.

One particular gathering I visited stays in my mind—a youth group called Menara Doa Kristen (“the tower of Christian prayer”)—where teens described what it’s like to be a young Christian in Aceh. Some go to schools in outlying villages where they’re the only non-Muslims in the classroom. They’re often bullied because of their religion. Their Muslim classmates—and often their teachers, too, I was told—tell them the Bible is false and their religion is wrong.

This reflects a trend I noticed: Christian populations in rural Aceh face even harsher treatment than they do in the province’s capital city. In October 2015, mobs in Aceh’s Singkil district burned down three churches. Thousands of Christians were forced to flee the region.

I spent my last day in Aceh at Sacred Heart Church. The place was packed, every pew full. Mass began with a procession to the altar: priests striding slowly, acolytes bearing candles. Leading them all was a young girl. Proudly she held high a crucifix, big and bronze.

After Mass worshippers approached me to chat. “This place we live, you know they call it Mecca’s front porch,” one said. For Christians, he said, life in Aceh isn’t easy. “But we come here,” he continued, “and we see the Cross, and then we know we can keep going.”